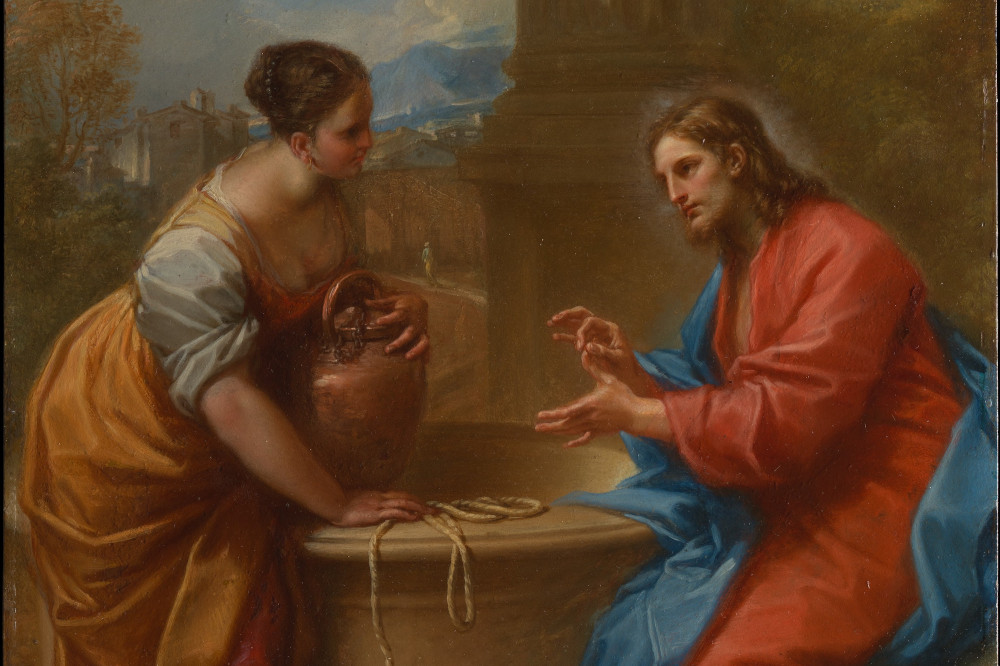 "Jesus and the Samaritan Woman at the Well," glass painting by unknown German, circa 1420 (Metropolitan Museum of Art)

What will thirst lead you to do? If you were among the people Moses tried to lead into freedom (Exodus 17), it could send you into rancor, recrimination and rebellion. Their problem was much more than a dry throat. They were moving deeper and deeper into the desert, and they didn't see any source of water. The thirstier they got, the greater their distrust. That became a vicious cycle designed to destroy faith and hope.

So, Moses turned to God in desperation. And what did the God of Israel do upon seeing the chosen people's infighting and lack of faith? The God of Israel provided the people with miraculous water from a rock. (This sounds just like the time that same God fashioned real clothes for poor Adam and Eve while they tried to hide behind fig leaves.)

With the help of God, Moses helped his people quench their thirst and come to greater trust in God in the process.

Thirst is a sign of our most basic need. Human beings die of thirst far more quickly than of hunger, and our other instinctive and biological needs pale in comparison. That makes thirst an apt symbol for our greatest needs and deepest desires.

The scene of Jesus and the woman at the well invites us to contemplate our deep needs and desires. It begins with Jesus' own need for water. The Gospel of John has no nativity story, no images of the baby Jesus who needed to be fed and have his diaper changed.

But this scene portrays the Son God who not only shares basic human needs, but who depends on human beings. In the first movement of this scene, Jesus asks a woman to provide him with the water he needs.

According to the Orthodox tradition, this woman's name was Photini. Representing everyone who feels like an outcast, St. Photini replied with the ridicule underdogs relish when bullies need their help. "You, a Jew, need something from me, a Samaritan? How rich!" Jesus takes no offense, but redirects the conversation: "If only you knew the gift of God. … I would give you living water."

We know the story. Photini parleys with Jesus and tries to turn the encounter into a theological debate. But at each turn, he takes her deeper. Jesus would not let himself get caught in a dispute about whether the Samaritan or Jewish approach to God was better. Instead, he said that every religious tradition comes up inadequate — like momentary thirst quenchers. No religion, no matter how inspired, can contain the wealth of spirit and truth that wells up inside someone and leads them to eternal life.

It's easy to get caught up in the detail of Photini's five husbands, concentrating our curiosity on whether that referred to adultery or a religion that worshipped many gods, but concern about that detail derails us from the essence of the story. Jesus concentrated on possibilities, not the unchangeable past.

When Jesus met Photini, he was thirsty — he needed water and he desired to share his deepest thirst with her. He named that thirst when he told her that the Father seeks people who worship in spirit and truth — the Father's thirst was his own.

Photini might have been trying to get off the hook when she said, "I know that the Messiah is coming. When he comes, he will tell us everything." It's ever so human to say, "I know the day will come, but I can't think about that quite yet." Jesus brought her into the intensity of the moment saying, "I am he."

The name Photini means "enlightened." Unlike the religious leaders who debated with Jesus to trap him, Photini allowed herself to enter into Jesus' way of thinking. Like the Emmaus disciples who slowly understood the depth of the conversation they had been having, she allowed herself to be lured beyond her preconceptions and prejudices and realized that she had been drinking the living water Jesus was talking about.

When their conversation was stopped, Photini abandoned her ordinary concerns and hurried to her own people to tell them what had happened. She convinced them that they should come and see for themselves. Thus, in the Orthodox tradition, Photini has the title "Equal to the Apostles."

Photini, Moses and their people come into our liturgy today to encourage us to consider our own thirst. What is it we most desire in life? When and how do we drink from the font of living water? How are we called to invite others to the well?

Remember, our thirst is a gift from the God waiting for us at the well.

A version of this story appeared in the March 6-19, 2020 print issue under the headline: We thirst.