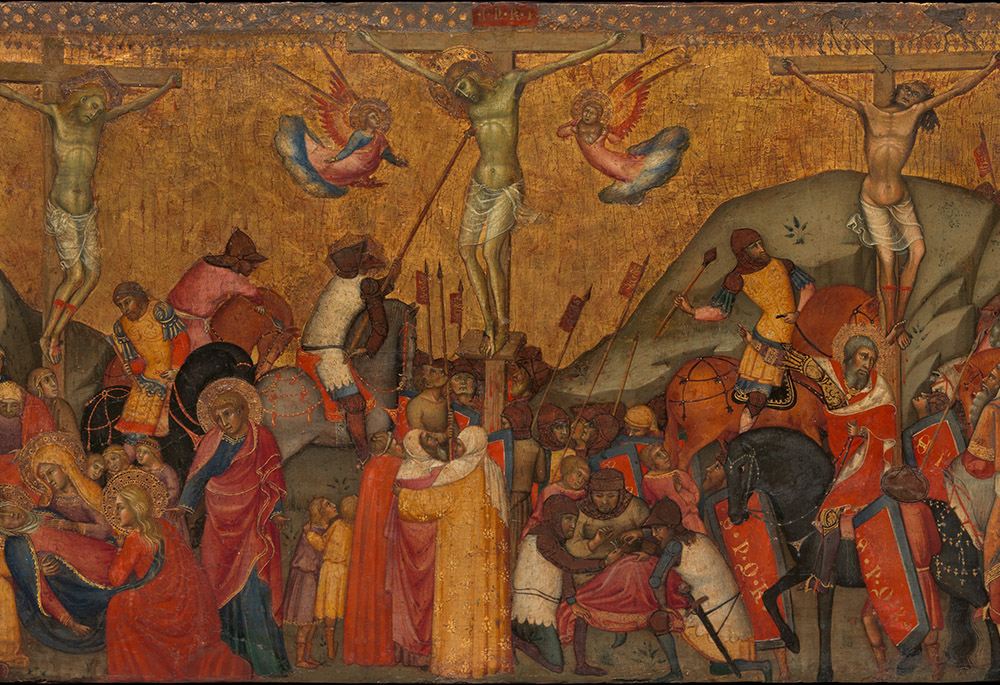 "The Crucifixion," a painting by Andrea di Bartolo (Metropolitan Museum of Art)

Once upon a time, a wicked queen asked, "Mirror, Mirror on the wall, who in this land is fairest of all?" Unfortunately, the magic mirror could only speak the truth; instead of naming the woman admiring herself, the mirror named her stepdaughter, putting little Snow White in mortal danger. Although the queen tried three times to murder her, Snow White survived, married the handsome prince and became the fairest queen in the land.

This classic story depicts royalty, poverty, servitude, danger and finally, punishment for evil and the triumph of innocence and beauty over cruelty. It's all about image, innocence and evil — about whose image is the most beautiful and the woe that flows from jealousy.

In the hymn Paul quotes in his letter to the Colossians, he describes Christ as the image of the invisible God in whom all the fullness was pleased to dwell. Snow White's beauty reflected one culture's sense of the best they had to offer. Paul's depiction of Christ is based on behavior rather than appearances; he describes Christ as being like God rather than appearing like what any culture would want or imagine a god to look like.

Solemnity of Our Lord Jesus Christ, King of the Universe

We have no description of Jesus. We can assume he looked like a Middle Eastern man of his time and dressed in the clothing that distinguished observant Jews. The only hint we have about his appearance comes from Isaiah, who described the suffering servant as so startlingly disfigured that he no longer appeared human (Isaiah 52:14).

Luke tells us that as Jesus was dying, his torturers sneered and jeered at him, insisting that if he were of God, he should be able to save himself as he had supposedly saved others. Then, the mother of all insults was the sign posted over his head proclaiming his crime: "This is the King of the Jews." It's not an appealing picture.

Truly, the only touchstone between Jesus and the fairy tales is the suffering of the innocent. God sent Jesus no handsome prince or saving angels. This king of the universe died, nailed down and rejected by civil and religious authorities. To the Romans, he meant next to nothing. To the religious elite, he presented a moral and perhaps even a mortal threat. To most of his disciples, he had become a danger and an apparent failure.

Yet, some of the most powerless people around saw something else. The lamenting women continued to accompany him, offering him the only thing they could: their loving and brokenhearted presence.

The saving grace in this scene is revealed when the dying Jesus interacts with the God-fearing criminal who shared his sentence. Somehow he, more than any other man, grasped a portion of Jesus' own faith. Flying in the face of appearances and reason itself, the man said, "Jesus, remember me when you come into your kingdom."

The request, "Remember me," resounds with scriptural significance. The Exodus happened because God remembered the covenant and acted (Exodus 2:24). When Jesus broke and blessed the bread of his self-giving, he told his disciples to do the same in remembrance of him. Remembrance is a form of calling on real presence. Jesus promised his crucified companion that he would not only share his death, but also his life.

The title of this feast is superlative. The images we typically create for it are flush with symbols of royalty and high priesthood; greatness and grandeur are the order of the day. Nevertheless, the Gospel we hear today reflects none of that. Today's Gospel portrays an apparently impotent Christ: defeated in the eyes of the world and dying in the sight of an impotent or uncaring God.

If we ask which of these images, the royal or the shattered, better reflects Christ, we must choose the one from the Scriptures rather than the human imagination.

As we think about the Christian message, especially on a feast like today's, it's too easy to fall into a fairy tale mode and recall Christ the King as the ultimate happily-ever-after story. This flies in the face of the Scriptures. It strips Jesus' death of its depth and risks portraying his love as shallow as that of a prince enchanted by prettiness.

On the solemnity of Our Lord Jesus Christ, the King of the Universe, let us remember the real Jesus: Rejected and mocked, he was powerless to stop the violence. Let us remember that he reigned through active love even as he suffered and died. When God raised him, even though he still bore the marks of suffering, it was the love that continued to reign.

Faith insists that love is the only power capable of overcoming evil. As living images of our God, it is that love and that alone that we are called to remember and make present again.