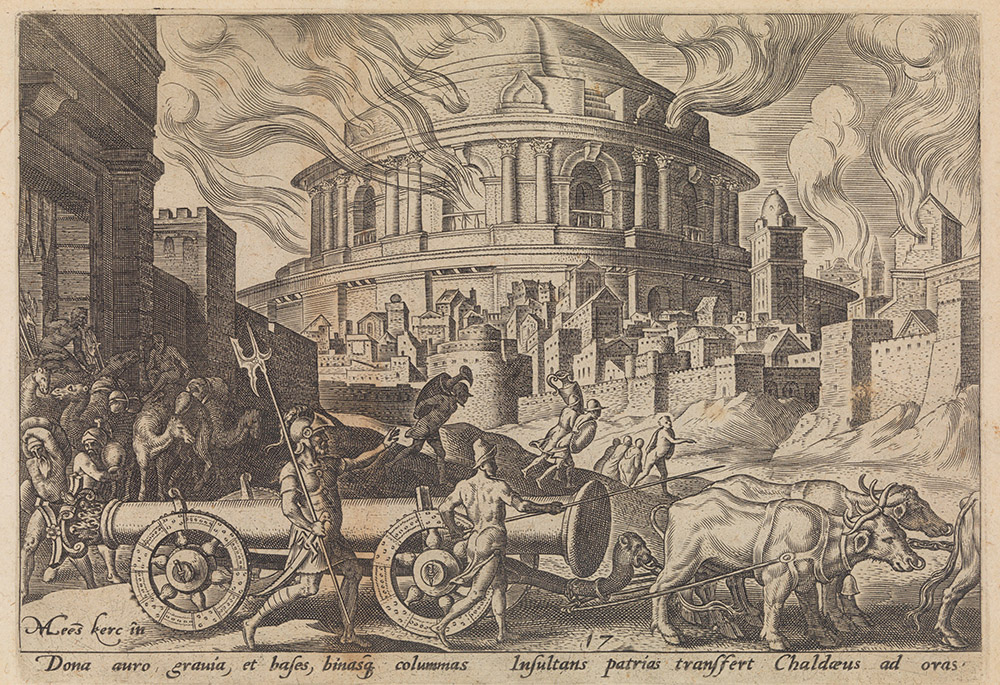 "The Chaldeans Carrying Away the Pillars of the Temple of Jerusalem," from "The Disasters of the Jewish People," plate 17, a 1569 engraving by Philips Galle, after Maarten van Heemskerck (Metropolitan Museum of Art)

For Luke's community, it was the Jerusalem Temple. Perhaps for us it's the twin towers or COVID-19. Jesus warned people who were enthralled with the Temple's majesty: "The days are coming when there will not be left a stone upon another stone." Many who heard him discovered sadly that he predicted not a far-off calamity, but a tragedy they would see with their own eyes and mourn in utter confusion. The Temple had been the centerpiece of Jewish practice and the place where God dwelt among them. According to ancient sources, the Temple of Jesus' time was under construction for nearly 50 years and was completed only six years before the Romans destroyed it.

What was Jesus telling his followers when he predicted the Temple's destruction? While he avoided responding to questions of when it would happen, he warned them of other dimensions of what it would mean. Charlatans would appear, posing as God's envoys. Natural and social catastrophes would make it seem that the world was coming to an end, and God's own people would be persecuted by enemies, former friends and even family members. The answer to their anxieties? Only this: "By your perseverance you will secure your lives."

Our selection from the prophet Malachi helps us make sense of it. Malachi's description of the day of the Lord is wonderfully paradoxical. He says it will blaze with contradictory effects. Evildoers will be reduced to stubble and at the same time, that sun which destroyed the proud will heal those who stand before God in reverence and awe. In Jesus' example, cataclysmic events will traumatize some and lead others to act as false messiahs, yet those events will also provide the occasion for the faithful to come into their truest selves.

The faithful who gazed on the rubble of the Temple had to search painfully for what it meant. The ruins testified that their faith in the Temple had been misplaced. Some wondered if even their faith in God had been an illusion: a comforting fiction as long as it lasted, but ultimately little more than what Karl Marx called the opiate of the masses. Had Roman power finally overcome Israel's God? Others questioned whether their faith depended on the Temple. They remembered that before the Temple, God had traveled with their ancestors, present through the tent of meeting that traveled with the people. Some of these followed the lead of Pharisees and rabbis as synagogue worship created the practices which have continued for millennia.

Jewish Christians, as devastated as the rest, could hardly avoid recognizing the similarity between the ruined Temple and the death of Jesus. Underlining that, Matthew, Mark and Luke recounted Jesus' interpretation of the tragedy as an event that led disciples to give witness. Later, John made the connection explicit: "Destroy this temple and in three days I will raise it up" (John 2:19).

Ironically, when Jesus warned the disciples about coming persecution and destruction, he warned them not to try to prepare for it. Attempts to prepare would have only led them to fight imaginary battles. Instead, Jesus promised that when the time came, "I myself shall give you a wisdom that your adversaries will be powerless to resist or refute." He offered a persevering hope rather than strategy.

Contemplating first-century Christians and Jews at the destruction of the Temple dares us to ask what anchors our faith. The Second Vatican Council challenged Catholics to a renewal that led us to distinguish between what sacramental theology calls outward signs and inward grace, between symbol and what the symbol points toward, between particular expressions and the essence of faith.

Today, instead of the destroyed Temple, we live with the memory of how Sept. 11, 2001, obliterated our sense of national invincibility. COVID-19 has taught us that national borders are fictions, divisions no more protective than were the emperor's new clothes. Russia's aggression against Ukraine keeps us mindful of the constant threat of nuclear war. These realities are universal expressions of the intensely personal truth we all know but usually try to forget: to be alive implies that we are mortal.

As Malachi said, this reality can be either terrifying or hopeful. Going for the latter, we can remember the tent of meeting and persevere in trust that, while we don't and can't know the details, we know that the destination is what Pope Francis describes as "the sabbath of eternity, the new Jerusalem" where "we will find ourselves face to face with the infinite beauty of God, and be able to read with admiration and happiness the mystery of the universe" (Laudato Si', 100 and 243). Trusting in that, we will live like people who know that no catastrophe is beyond the reach of God's healing sun of justice.

A version of this story appeared in the Oct 28-Nov 10, 2022 print issue under the headline: Catastrophe!.