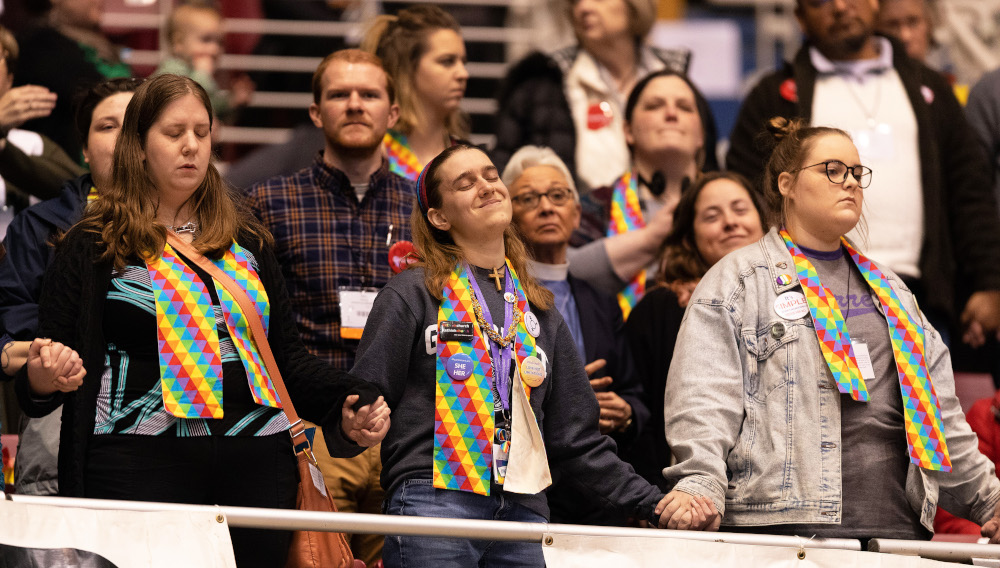 Supporters of full inclusion for LGBTQ people in United Methodist Church life hold hands in the observer's area at the 2019 United Methodist General Conference in St. Louis on Feb. 25, 2019, while waiting for vote totals to be displayed. (Mike DuBose/UMNS)

The United Methodist Church’s deadline for petitions for its next global meeting passed Sept. 18, setting the terms for a final reckoning with LGBTQ issues that have divided the denomination for more than 40 years.

The church’s General Conference 2020, to be held in May in Minneapolis, will consider the structure of what church leaders hope can be an amicable, and orderly, breakup of a worldwide church that is the second largest Protestant denomination in the United States. The various plans come in response to a vote earlier this year by the church’s decision-making body to strengthen language barring LGBTQ United Methodists from ordination and marriage.

That decision came in February at a special session of the General Conference that approved the conservative Traditional Plan, which centrists and progressives in the church have rejected and adamantly resisted. The resulting chaos has led some churches to withhold money from the denomination or to call for schism.

Bishops in areas that are growing within the denomination and widely seen as conservative, such as the Philippines and African countries, have urged unity in recent statements, even as moderates, most of whom are based in the United States, are optimistic about the prospect of formal separation.

The denomination won’t release the full text of petitions that will be considered at the 2020 meeting until all have been translated into the four official languages of the meeting.

But all of the most likely proposals provide for dissenting congregations to exit the denomination, while in most cases retaining ties to United Methodist support organizations such as publishing houses.

The Indianapolis Plan would split the United Methodist Church into at least two denominations with differing theological understandings of LGBTQ ordination and marriage.

One of the two new groups would uphold the language passed at the special session earlier this year. The other would remove language from the Book of Discipline, the church’s consensus ruling document, that refers to the “practice of homosexuality” as “incompatible with Christian teaching.”

A possible third denomination would immediately celebrate the full inclusion of its LGBTQ members by marrying them and allowing them to be ordained.

All of the new denominations would be allowed to retain “United Methodist” in their names.

The plan was drafted by a group of 12 conservative, centrist and progressive United Methodists who began meeting in late June.

It included Millard; the Rev. Keith Boyette, president of the Wesleyan Covenant Association, a conservative group that had backed leaving the United Methodist Church if the Traditional Plan had not passed at the special session; and the Rev. Tom Lambrecht, vice president and general manager of Good News, which also had supported the Traditional Plan, according to the United Methodist News Service.

It also included some clergy affiliated with the Reconciling Ministries Network, a group that advocates for the full inclusion of LGBTQ people in the church, though the network is officially supporting a different proposal.

The UMCNext Proposal, released in August, aims to keep the United Methodist Church intact. However, it would provide a way for churches that wish to leave to be able to do so while continuing to share denominational agencies.

It also would remove language from the Book of Discipline that singles out and discriminates against LGBTQ United Methodists, put an end to disciplinary procedures against clergy who are LGBTQ or who have performed same-sex weddings and allow pastors to determine who they consider ready for marriage within the church.

It also calls for yet another special session of the General Conference to be held in 2022 to consider a new comprehensive structure and governance plan for the denomination.

The UMCNext Proposal was developed and is supported by the UMCNext Coalition, which includes the Reconciling Ministries Network, Uniting Methodists and Mainstream United Methodist Church.

It follows a May meeting of more than 600 centrist and progressive United Methodists from every annual conference in the country at the United Methodist Church of the Resurrection in Leawood, Kansas, the largest United Methodist congregation in the U.S., convened by its pastor, the Rev. Adam Hamilton. 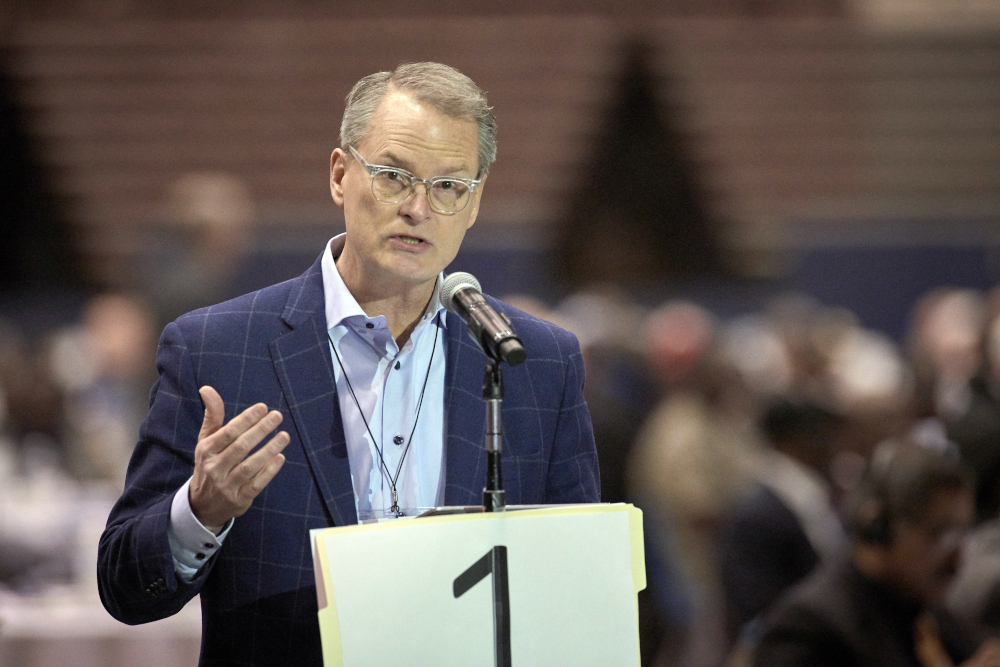 The Rev. Adam Hamilton, senior pastor of Church of the Resurrection in Kansas, speaks on Feb. 26, 2019, during the special session of the General Conference of the United Methodist Church, held in St. Louis. (Paul Jeffrey/UMNS)

“Most United Methodist congregations have people of differing views and convictions regarding same-sex marriage. We’ve learned to live with those differences,” said Hamilton in a statement about the group’s proposal.

“The UMCNext proposal seeks to reimagine a United Methodist Church for all people. It removes the language in the Book of Discipline that is harmful to LGBTQ persons. It provides a gracious exit for those who wish to leave, and it allows pastors and churches to minister according to their convictions.”

For LGBTQ United Methodists, Reconciling Ministries Executive Director Jan Lawrence said in the statement that the proposal “treats everyone fairly and equitably and allows us to reimagine a United Methodist Church free from the current restriction and welcoming all of God’s children.”

‘A New Form of Unity’

A third strategy, titled “A New Form of Unity: A Way Forward Strategy 2019-2022,” was floated in July by Bishops David Bard of the Michigan Conference and Scott Jones of the Texas Conference.

The strategy would split the denomination into several self-governing churches in full communion with one another, with the United Methodist Church remaining as “an umbrella organization to facilitate this new form of unity.”

The strategy also would create a United Methodist Church in Africa and allow churches in Europe and Asia to form their own Methodist churches or to belong to one of the two or three churches formed by the plan. 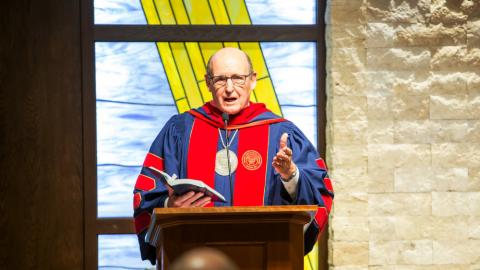 “We both envision a future where the church will focus on its mission of making disciples and spend less time and energy debating issues of human sexuality, which means we need to bless different parts of The United Methodist Church to be about the mission in their own ways,” Jones told the United Methodist News Service.

Bishops are not allowed to vote during General Conference meetings, but going into February’s special session, the Council of Bishops had recommended allowing individual churches and regional annual conferences to decide whether to ordain and marry LGBTQ members. Any petition that accommodated their plan would have the weight of the bishops’ opinion.

Other petitions discussed in the lead-up to Wednesday’s deadline include creating a new structure for churches in the U.S. so that U.S.-focused matters don’t overwhelm the global General Conference; revising the denomination’s Social Principles, a statement of the church’s aims, to better apply to the global church; and adding more bishops in African countries, where the denomination is growing fastest.

It was unclear at press time how many of those plans and proposals actually were submitted for consideration as petitions.

Any organization, clergy member or lay member of the United Methodist Church may petition the General Conference, according to the Book of Discipline. Petitions deemed eligible for consideration go to one of several committees, which then decide whether to approve, amend, combine or reject them for recommendation to the General Conference.

The United Methodist Church plans to publish the full text of petitions by Feb. 5 — 90 days before the meeting in Minneapolis.