Sri Lanka police have arrested five people including a member of a hardline Buddhist organization for instigating religious violence against Muslims and a Muslim for defaming Buddhism, police said June 11.

The arrests come a week after diplomats condemned violence against Muslims in Sri Lanka and urged the government to uphold minority rights and freedom of religion. Earlier, legislators blamed the government for failing to stop a spate of attacks on minority Muslims.

More than 20 attacks on Muslims have been recorded since April 17, including arson at Muslim-owned businesses and petrol-bomb attacks on mosques while the police said at least 16 such cases had been reported since April.

President Maithripala Sirisena and Prime Minister Ranil Wickremasinghe have ordered police to uphold the law, but the violence against Muslims has not ended.

Muslims, who account for around 9 percent of Sri Lanka's population of 21 million, have blamed the attacks on Bodu Bala Sena (BBS) or the "Buddhist Power Force," an organization that says the spread of Islam is a threat to Buddhism as the dominant religion. It denies any involvement.

"The police was able to arrest a 32-year-old person who is directly related to four (arson) attacks," police spokesman Priyantha Jayakody told reporters adding that all four businesses were owned by Muslims.

Bodu Bala Sena in a statement denied its links with the recent attacks and said the organization has no membership.

"We have ability to unleash terrorism, extremism and violence, but not behind (latest anti-Muslim) attacks," CEO of the BBS Dilanthe Withanage said in a statement.

Jayakody also said the police had arrested four more people including a Muslim who posted a Facebook post against Buddhism and a Tamil national who attacked a mosque.

Buddhists make up about 70 percent of the population, and analysts say some hardline Buddhist organisations have been spreading hate speech against Muslims and encouraging people to boycott Muslim shops.

The Buddhist groups accuse some Muslim organizations of radicalizing the community and forcefully converting people to Islam and vandalizing Buddhist archaeological sites. Muslim leaders have denied the claim.

In 2014, three Muslims were killed in riots stirred up hardline Buddhist groups. President Maithripala Sirisena was elected the following year after a campaign in which he promised to solve the issues faced by ethnic minority Tamils and Muslims.

Churches also have faced similar attacks in the past. 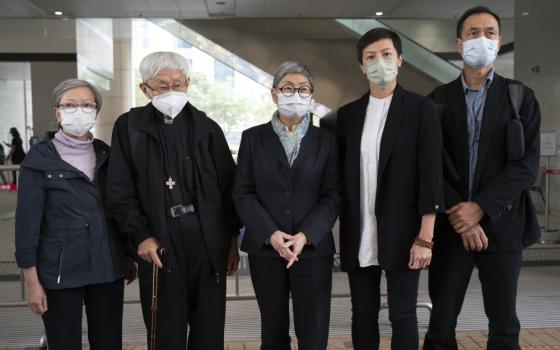