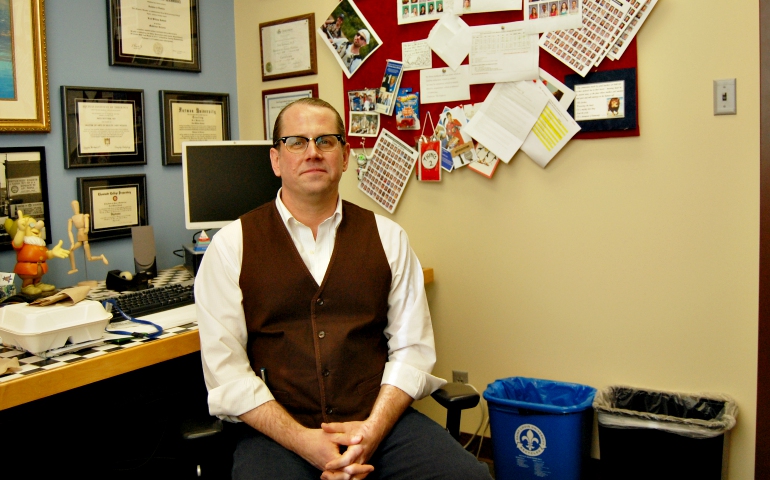 Dr. Fred Rottnek believes that every medical student should go to jail.

A physician who also holds a master's degree in health care mission from the Aquinas Institute of Theology, Rottnek currently works as professor and director of community medicine at St. Louis University.

But for 15 years, he also served as medical director for corrections at the St. Louis County Jail, an experience so formative for him and his students that he thinks it should be part of every medical education.

Rottnek likes to tell people, "I don't love medicine; I love what I can do with it."

Because of his theological education and his experience with marginalized communities, what Rottnek strives to do with medicine is promote "human flourishing" (a term he borrows from Thomas Aquinas), especially for those at risk of unequal access to care.

His experience has taught him that "a community is only as healthy as those of us with the fewest resources." People who lack resources not only suffer unjustly, but pose risks for others, whether from an unvaccinated cashier sneezing on groceries or from violence caused by substance abuse.

Because of this, Rottnek is interested not just in improving health care, but in giving everyone access to it.

"We can have the best cancer centers and the best heart centers," he said, "but we need good public health benefits or we'll all suffer."

Knowing health care access is a complex issue, Rottnek works with people who approach the topic from different areas of expertise. He has a talent for bringing people together and translating among disciplines.

One person who has collaborated with Rottnek is Sidney Watson, a professor at the Jesuit-run St. Louis University and an attorney who focuses on access to health care.

"While I'm thinking about health care policy," she said, "he's on the ground doing the medicine, and seeing what's happening to people live."

While Rottnek's direct experience informs Watson's work, she and other law professors have influenced him as well, teaching him how to advocate to legislators more effectively.

Rottnek discovered his love of "working across margins and intersections" while completing his master's in health care mission. He was part of the program's first cohort at the Dominican-sponsored Aquinas Institute in St. Louis, joining other health care leaders who hoped to guide their organizations in accordance with Catholic principles.

One of the best parts of Rottnek's experience was learning alongside fellow students who worked in such diverse fields as finances or chaplaincy. It let him see "how health care can be delivered with a mission focus from many perspectives, and how those perspectives can inform each other."

Rottnek's motivation also comes from personal experiences with people who have gone without health care. From his second year of medical school until 2002, he served at a clinic for homeless men called Harbor Light. He also worked at a nonprofit that provided general-medicine care to the poor.

He then became medical director for corrections at the St. Louis County Jail. He kept this position for 15 years, only leaving when his public advocacy against cuts to staff and privatization of the jail's medical care caused tensions with county officials.

Working at the jail was transformative. In an article he wrote for the journal Conversations on Jesuit Higher Education, Rottnek describes how caring for Sam, a 13-year-old, changed his theology. Accustomed to thinking of people as good or evil, he realized this was not a helpful framework when faced with a traumatized child in an adult jail.

Rottnek started noticing how trauma impacted the behavior of many of his patients, and began to focus on their inherent value as humans and their ability to grow and change. Treating people as evil is "a paradigm that does not allow for improvement of the human condition," he wrote, while his "trauma-informed lens" allows him to be a more effective and compassionate physician.

Now, by attempting to understand and listen to his incarcerated patients, he aims to imitate Jesus, who often worked with traumatized populations and enjoyed the company of "people often criticized — if not ostracized — by their communities," Rottnek said.

As director of St. Louis University School of Medicine's Coe Distinction in Community Service Program and its Service and Advocacy Learning Community, Rottnek is dedicated to helping his students have similar experiences.

Dr. David Pole, a colleague of Rottnek in the Coe Program, described him as a powerful mentor who leads by example.

When Rottnek recommends that his students treat their patients with respect, build bridges between groups, and practice critical reflection, his "biggest strength is that he demonstrates these things in his own practice and his own life," Pole said. "That's a part of what makes him such a strong example and role model. He's not just talking about these things as something he's not doing."

Rottnek said the shortage of doctors who provide direct patient care can be remedied by giving medical students professional formation that encourages them to develop and nurture a sense of mission and an interest in working with underserved communities.

One of his favorite ways to do this has been involving students with the county jail. In an article titled "Every Medical Student Should Go to Jail," he explains the benefits of the experience: "A day has never passed when we have failed to reexamine our knowledge base, our assumptions and biases, and even our ideas of the individual's ability to heal, change, and grow as a human being."

However, Rottnek does not simply throw his students into challenging situations and hope that they experience growth. As a mentor, he teaches them to practice critical reflection in order to understand their experiences, shape their professional identities, and avoid burnout.

"Burnout comes from us losing our professional sense of self," Rottnek said, while regular reflection "allows us to find our inspiration and our foundation; this can help us not only deal with bad days but also celebrate good things."

The ultimate goal is for students to find their vocations, understood as "finding your authentic self — what makes you tick, what brings you joy."

Rottnek certainly seems to have found his own vocation. Although dealing with a complicated and problematic health care system, he does not seem weighed down or discouraged by the problems he witnesses.

"I don't do this work because I feel obligated," he said. "I do it because it's very rewarding and inspiring, and it's a good fit for me."

[Maria Benevento is the volunteer and food programs coordinator for the Oakland Catholic Worker, a transitional shelter for Latin American immigrants in California. She is a 2015 graduate of Creighton University, where she majored in theology and American studies.]