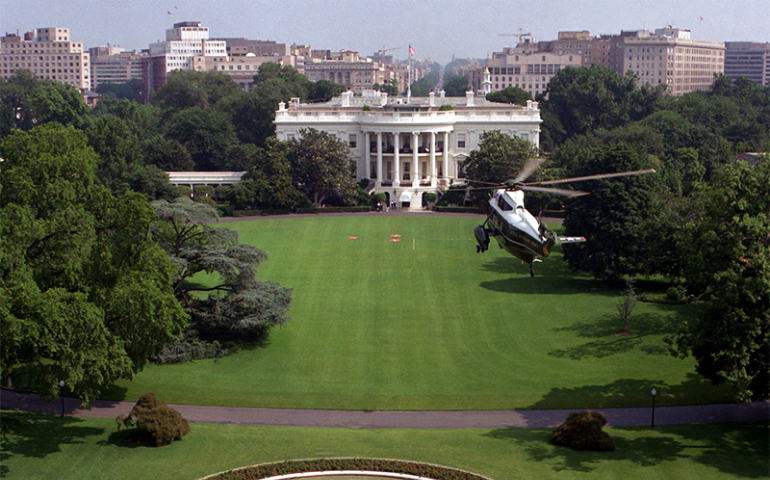 Marine One arrives on the South Lawn of the White House in 2009. (Creative Commons/DOD/C.M. Fitzpatrick)

Since winning the election with strong support from conservative evangelical voters, President Donald Trump has invited their leaders to the White House and banned government funding for groups that support or perform abortions overseas.

But he has yet to move on one item that many of them care about.

No one has been named to direct the Office of Faith-based and Neighborhood Partnerships, which since 2001 has linked government with a broad range of religious groups.

A link to the office’s webpage reads “Thank you for your interest in this subject. Stay tuned as we continue to update WhiteHouse.gov.”

“I don’t know what the Trump administration’s plans are in this area,” said Melissa Rogers, who directed the office under the Obama administration from 2013 until Inauguration Day 2017.

The office has enjoyed the support not only of conservatives, but also many religious progressives like Rogers who believe faith-based charities are well-positioned to help the needy, and some get government contracts to do so with taxpayer funds.

Critics of the office are baffled by the delay in naming a director.

“It does seem odd that this position would still be unfilled, given Trump’s constant playing to the conservative evangelical base,” said Rob Boston of Americans United for Separation of Church and State.

Indeed, the ties between the administration and religious conservatives are close.

Evangelical leaders have visited the White House “on multiple occasions” and administration members have been “in near constant communication” with those advisers who aided him during his campaign, said Johnnie Moore, who served as a member of the Trump campaign’s evangelical advisory board.

“The administration hasn’t just spoken about giving a seat at the table to the faith community, they have — and are — actually doing it,” he said, adding that Trump staffers have held “multiple meetings with a diverse group of Christian and Jewish leaders especially as it relates to the Supreme Court.”

Evangelicals, in particular, are feeling welcome, he said.

“Some of us have actually been in meetings at the White House and State Department that began or ended in prayer,” he said. “Many evangelicals feel like the administration has an open-door policy.”

Just as Rogers’ former position remains empty, the post of the ambassador-at-large for international religious freedom has yet to be filled at the State Department. But Rabbi David Saperstein, who held that position at the end of the Obama administration, believes there will be a successor.

“This cause and office has such strong and bipartisan wall-to-wall support throughout both the Republican and Democratic components of the Congress,” said Saperstein, who returns to the Union for Reform Judaism as a senior staffer on April 1. “In the meantime, there remains a very strong, dedicated, effective staff that continues their work every day on behalf of strengthening religious freedom across the globe.”

The Obama administration took more than a year to name Saperstein after his predecessor, the Rev. Suzan Johnson Cook, resigned. But President Obama announced the Rev. Joshua DuBois as his first director of the faith-based office within weeks of his 2009 inauguration.

Rogers, who was DuBois’ successor, hopes the office she led as well as the faith-based offices at 13 federal agencies will continue work on efforts that have ranged from feeding nutritious summertime meals to children to fighting the Zika and Ebola viruses.

“The offices and the broader administration must demonstrate a steadfast commitment to welcoming all faith groups and treating them equally, respecting the independence of religious communities and promoting the common good, not theology,” said Rogers, a nonresident senior fellow at the Brookings Institution.

“I think we accomplished a great deal through these offices but they won’t succeed if they don’t have that kind of strong foundation.”

Stanley Carlson-Thies, a staffer for the George W. Bush administration’s faith-based initiative, said offices of at least some federal agencies, including the Department of Health and Human Services, are continuing their work.

“The HHS Center, for example, remains a point of contact for faith-based organizations with questions and suggestions about grant programs from that department,” said Carlson-Thies, senior director of the Institutional Religious Freedom Alliance.

Earlier in March, Trump appointed the Rev. Jamie Johnson as director of the Department of Homeland Security’s Center for Faith-based and Neighborhood Partnerships. Johnson, a broadcaster and Trump campaign worker, was vice president of the nonprofit World-Wide Missions for 11 years.