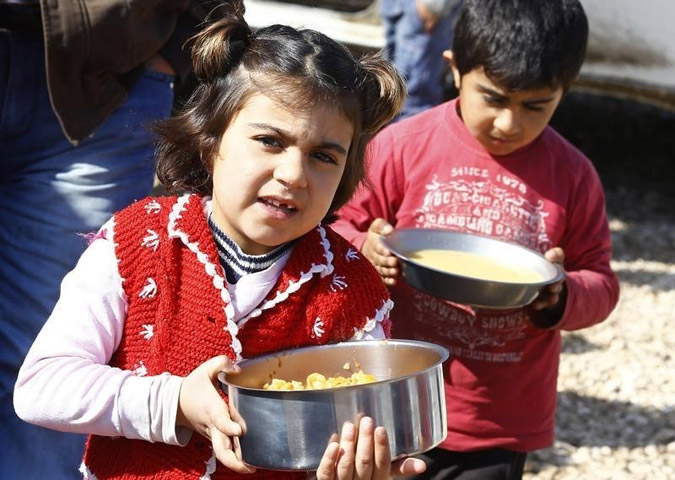 Kurdish refugee children from the Syrian town of Kobani carry food at a refugee camp in the border town of Suruc, Sanliurfa province, Feb. 1, 2015. (Reuters/Umit Bektas)

The U.N. Security Council was discussing the besieged towns of Syria on Monday, Jan. 11, after reports emerged that tens of thousands of civilians have been trapped for months without supplies and are starving to death.

"The tactic of siege and starvation is one of the most appalling characteristics of the Syrian conflict," he said.

Trucks carrying food and medical supplies reached Madaya near the Lebanese border and began to distribute aid as part of an agreement between warring sides, the United Nations and the Red Cross said on Monday.

A U.N. spokesman said aid trucks were also en route to the Shi'ite villages of al Foua and Kefraya in the northwestern province of Idlib, two other areas where there is a desperate need for humanitarian assistance.

U.S. Ambassador Samantha Power also had strong words about Madaya, slamming the "grotesque starve-or-surrender tactics the Syrian regime is using right now against its own people."

"Look at the haunting pictures of civilians, including children, even babies, in Madaya," she said. "These are just the pictures we see. There are hundreds of thousands of people being deliberately besieged, deliberately starved, right now. And these images, they remind us of World War Two."

Power was speaking at a special session of the 193-nation U.N. General Assembly on the 70th anniversary of the assembly's first meeting in London.

"All sieges must be lifted to save civilian lives and to bring Syria closer to peace," he said in a statement, adding that there were 850 infants in urgent need of milk in Madaya.

Syrian Ambassador Bashar Ja'afari told reporters his government was committed to "cooperate fully" on aid delivery but said much of what was said about Madaya was "based on false information." He labeled pictures of starving people as "fabrications."

"There is no shortage of humanitarian assistance in Madaya," he said, adding that some aid has been "looted by armed terrorist groups."

The Syrian civil war has been raging for nearly five years and has claimed more than a quarter million lives.

A U.N. Security Council resolution adopted on Dec. 18 set out a road map for peace talks and called on the parties to allow aid workers unhindered access throughout Syria, particularly in besieged and hard-to-reach areas.

The blockade of Madaya has become a focal issue for Syrian opposition leaders, who told a U.N. envoy last week they would not take part in talks with the government, slated for later this month, until it and other sieges are lifted.