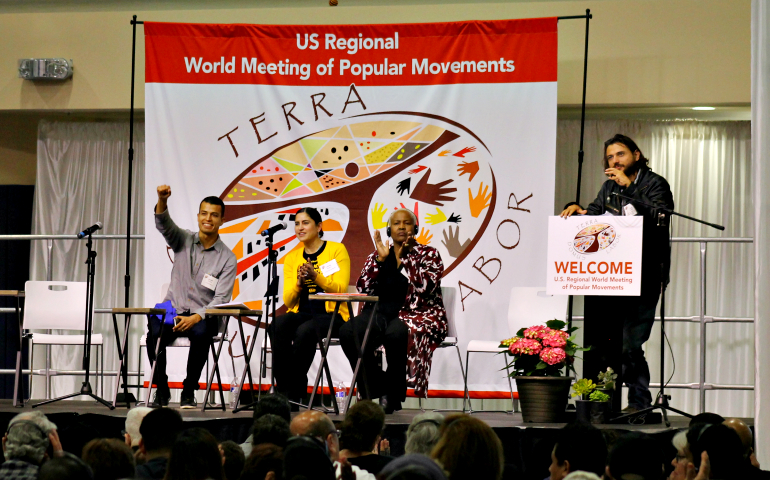 In a message to an assembly here of nearly 700 community organizers and social justice advocates, Pope Francis called on all people to become Samaritans and resist the "grave danger" in this moment to disown our neighbors amid a culture of indifference.

"Do not classify others in order to see who is a neighbor and who is not. You can become neighbor to whomever you meet in need, and you will do so if you have compassion in your heart," the pope said.

"You must become a Samaritan," he said.

His letter was delivered by Cardinal Peter Turkson and a World Meeting of Popular Movements organizer, who read it together, alternating paragraph by paragraph from English to Spanish, to those gathered in Central Catholic High School gymnasium to participate in the U.S. regional meeting.

The Feb. 16-19 gathering has brought together grassroots community leaders to California's Central Valley from 12 countries to address the World Meeting's central themes of "land, labor and lodging" (in Spanish, tierra, trabajo, y techo), along with issues of racism and immigration.

The pope's message arrived in the context of a United States engaged in heated debate about and pushback against executive orders by President Donald Trump barring immigrants and refugees entry into the country from seven majority Muslim nations. The pope at one point was direct in saying he was not speaking of any person in particular; however, at times his message carried tones contrary to positions held by Trump, including on the environment.

Francis said today there exists a "the grave danger ... to disown our neighbors. When we do so, we deny their humanity and our own humanity without realizing it; we deny ourselves, and we deny the most important Commandments of Jesus."

He repeated a message he delivered in November at the third World Meeting of Popular Movements: "No people is criminal and no religion is terrorist." He added that all peoples and religions include violent fundamentalists in their ranks, "and with intolerant generalizations they become stronger because they feed on hate and xenophobia."

The pope said they "should be neither paralyzed by fear nor shackled" by the current crises the world faces through an economy of exclusion and societal indifference — ills, he said, that did not begin yesterday. He called on Christians and people of good faith to act accordingly to these "signs of the times."

"Sooner or later, the moral blindness of this indifference comes to light, like when a mirage dissipates," Francis said. "The wounds are there, they are a reality. The unemployment is real, the violence is real, the corruption is real, the identity crisis is real, the gutting of democracies is real.

"The system's gangrene cannot be whitewashed forever because sooner or later the stench becomes too strong; and when it can no longer be denied, the same power that spawned this state of affairs sets about manipulating fear, insecurity, quarrels, and even people's justified indignation, in order to shift the responsibility for all these ills onto a 'non-neighbor,' " Francis said.

The pope was explicit in saying he was "not speaking of anyone in particular," but rather "I am speaking of a social and political process that flourishes in many parts of the world and poses a grave danger for humanity."

The four-day gathering, the first regional meeting held in the U.S., comes during the first month of Trump's administration, which has witnessed widespread demonstrations against actions he has taken — most notably his executive order barring refugees and immigrants from entering the country — or promised to do. While the conference was planned a year in advance, its alignment with the current national situation was not lost on those who spoke at the gathering's opening Feb. 16.

"We had no idea when we were planning this meeting how important it would be," said Bishop Stephen Blaire of Stockton, Calif. Blaire's diocese, along with the Fresno and Sacramento dioceses, is co-hosting the regional meeting.

Blaire highlighted the issues of migration and racism as requiring special attention. Organizers noted that 25 people were not attending the meeting due to uncertainty over Trump's executive orders on immigration and refugees.

"We are here to talk about transforming the world in which we live in light of our faith traditions in God," Blaire said. "We are here because we want to be with the poor, with the migrants, with the workers, with the homeless, and with those who are excluded."

The Stockton bishop noted the decision to hold the meeting in the agriculturally rich Central Valley was intentional, in that "it is here that every issue on our agenda is part and parcel of so many people's lives."

An overview of the discussions to come was presented by a handful of testimonies, several delivered in Spanish. The bilingual event offered its participants headsets to deliver on-the-fly translations in both English and Spanish.

"If you're here today and believe that no one stands alone, you're in the right place," said the Rev. Trena Turner of Faith in the Valley, a grassroots organization based in Central Valley.

Chris Ellis, a member of the Fight for $15 movement in Pittsburgh for four years, reflected on one of the driving forces behind the World Meeting as he described his involvement in other movements, including Black Lives Matter and the Standing Rock Sioux Tribe's opposition to the Dakota Access Pipeline.

He said he came to the World Meetings to listen to other movements, "and to help in any way I can."

Said Molly Hemstreet of Opportunity Threads in Morganton, N.C., "I'm here to remember that the challenges of my community are connected to the challenges of your community. Your solutions are my solutions, too." Opportunity Threads is a textiles cooperative that mostly employs Mayan immigrants and is supported by the U.S. bishops' Catholic Campaign for Human Development.

In his letter, the pope expressed his desire to encourage and strengthen those working toward the four-day gathering's central themes, saying it made him "very happy to see you working together towards social justice!"

"How I wish that such constructive energy would spread to all dioceses, because it builds bridges between peoples and individuals. These are bridges that can overcome the walls of exclusion, indifference, racism, and intolerance," he said.

Turkson noted that the Modesto meeting had assembled more bishops, about two dozen in all, than any of the prior World Meetings, the first held in 2014 in Rome.

Turkson, prefect for the Vatican's new Dicastery for Integral Human Development, said Francis came to him after his election as pope with a request for the cardinal to organize the event, saying, "I want to plant a flag ... here in the Vatican, and that flag is the banner of popular movements."

Turkson said the goals of the gathering were to recognize the structures that create indifference and exclusion in society, and to also recognize that the people represent the protagonists of change.

"We're not just passive actors," he said, repeating a message from Pope John Paul II and his successors that development is a vocation of every human being created in God's likeness.

Turkson stressed the strength that people have when they come together in solidarity. He used a metaphor of a broom, that while breaking a single bristle is easy, it is near impossible to break them when taken together.

"The solidarity of all of us coming together here is to celebrate this: Together, it's unbreakable. It cannot be broken," he said.

He, too, acknowledged that the event occurring this month was a coincidence but also timely. He noted that the U.S. is not alone in discussions about building walls, and mentioned talk in France of erecting an 8-foot wall around the base of the Eiffel Tower.

He said that the human person is created in relationship, and through respect of those relationships comes the meaning of justice.

In his letter, Francis made the point that "the ecological crisis is real," specifically a solid scientific consensus on climate change.

The pope added that science is not the only form of knowledge nor is it always neutral. "However, we also know what happens when we deny science and disregard the voice of Nature. ... I ask you again — all of you, people of all backgrounds including native people, pastors, political leaders — to defend Creation."

Before Trump took the oath of office, scientists and environmental advocates in the U.S. have worried about a clampdown on scientific research under his administration. Steps were taken to back up data on climate change as references to it have disappeared from the official White House website and as cabinet appointments with deep ties to the fossil fuel industry gained Senate approval.

At one point, Francis urged people to recognize that every crisis brings not only danger, but opportunity. The danger of disowning the neighbor presents the opportunity that through the love of neighbor, "like a lightning bolt in the dark ... may wake us up and let true humanity burst through with authentic resistance, resilience and persistence."

"Sooner than later," Francis said, "the moral blindness of this indifference comes to light."

A version of this story appeared in the March 10-23, 2017 print issue under the headline: Meeting rallies to 'stand with those whose backs are against the wall'.