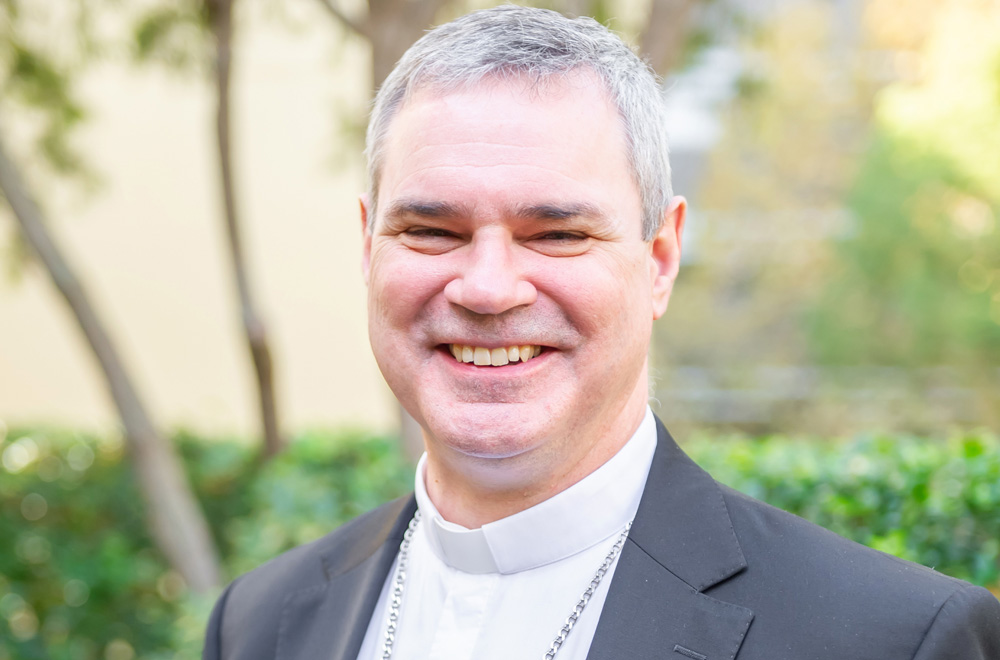 Melbourne Archbishop Peter Comensoli is seen in this undated photo. (CNS/Courtesy of ACBC)

One of the prelates taking part in this month's worldwide meeting of Catholic bishops says he is planning to speak to the gathering about how young people are searching for meaning in their lives.

Archbishop Peter Comensoli, who leads the Catholic community in Melbourne, Australia's largest diocese by Catholic population, said he wants to talk about how youth are "keen to open their horizons to what God might be wanting for them."

The prelate, one of three from his country taking part in the Oct. 3-28 Synod of Bishops, said in an Oct. 3 interview that he thinks many young people are what he termed "horizon-hunters."

"Our culture lays out a plethora of options, ideas and possibilities and says to … our young people particularly, 'Go, make yourself,' " Comensoli told NCR. "It's having the effect of so many young people being fragmented in themselves; they are struggling to find a way of integrating their lives."

The archbishop said he thinks there are two different kinds of worldviews: "create yourself'" and "discovery of yourself." The second worldview, he said, means, "We're not just some blank sheet that can take on anything, but already we have meaning in our very bodies and our very lives."

"I want to say our young … can enter into that discovery by entering into a horizon which opens up to a different view of the world," said the archbishop.

Comensoli spoke in a 20-minute interview shortly after the opening Mass for the synod, which has brought to Rome 267 bishop and priest members, 72 lay auditors and eight delegates from other Christian denominations to consider the theme "young people, the faith and vocational discernment."

The archbishop, who was appointed to Melbourne by Pope Francis in June, is one of 38 bishops and priests named to attend the synod personally by the pontiff. He is taking part alongside Sydney Archbishop Anthony Fisher and Melbourne Auxiliary Bishop Mark Edwards, who were elected by the Australian bishops' conference.

Comensoli said that participating in the opening Mass, led by Francis, made him think about how the synod "has to be immersed in prayer."

The archbishop noted the lengthy preparation period for the 2018 synod, which included release of an online questionnaire for youth around the world to indicate the issues important to them, and a preliminary March meeting of young people in Rome.

Asked about the final document from that meeting, which among other things called for the church to offer young people more leadership roles, Comensoli spoke of the idea of "missionary leadership."

"I'm not terribly keen on everything being reduced down to a ministry," said the prelate. "It's not what we're on about. We've got a mission to proclaim. And that can happen in so many ways, and allowing those ways to bloom is really important."

As an example, Comensoli pointed to Luke's account of Jesus sending 72 people in pairs to towns he intended to visit.

"Mission is always first, not ministry," he said. "Ministries exist to assist and serve the mission, including the ministry of the bishop."

Commenting on his first experience taking part in a synod as a member, Comensoli said he was seeking most to listen to the voice of the Holy Spirit.

"It's not just a matter of hearing … voices and coming up with some sort of consensus of opinion," said the archbishop. "If the synod is reduced down to a particular opinion winning the day, then it's not truly a synod. That's a political meeting."

"I think that's part of my responsibility, at least as one of the voters, to search in that way and to find something to say," he said. "To express something is to communicate something, so something needs to be said. And what might that be is part of the journey of these next few weeks."