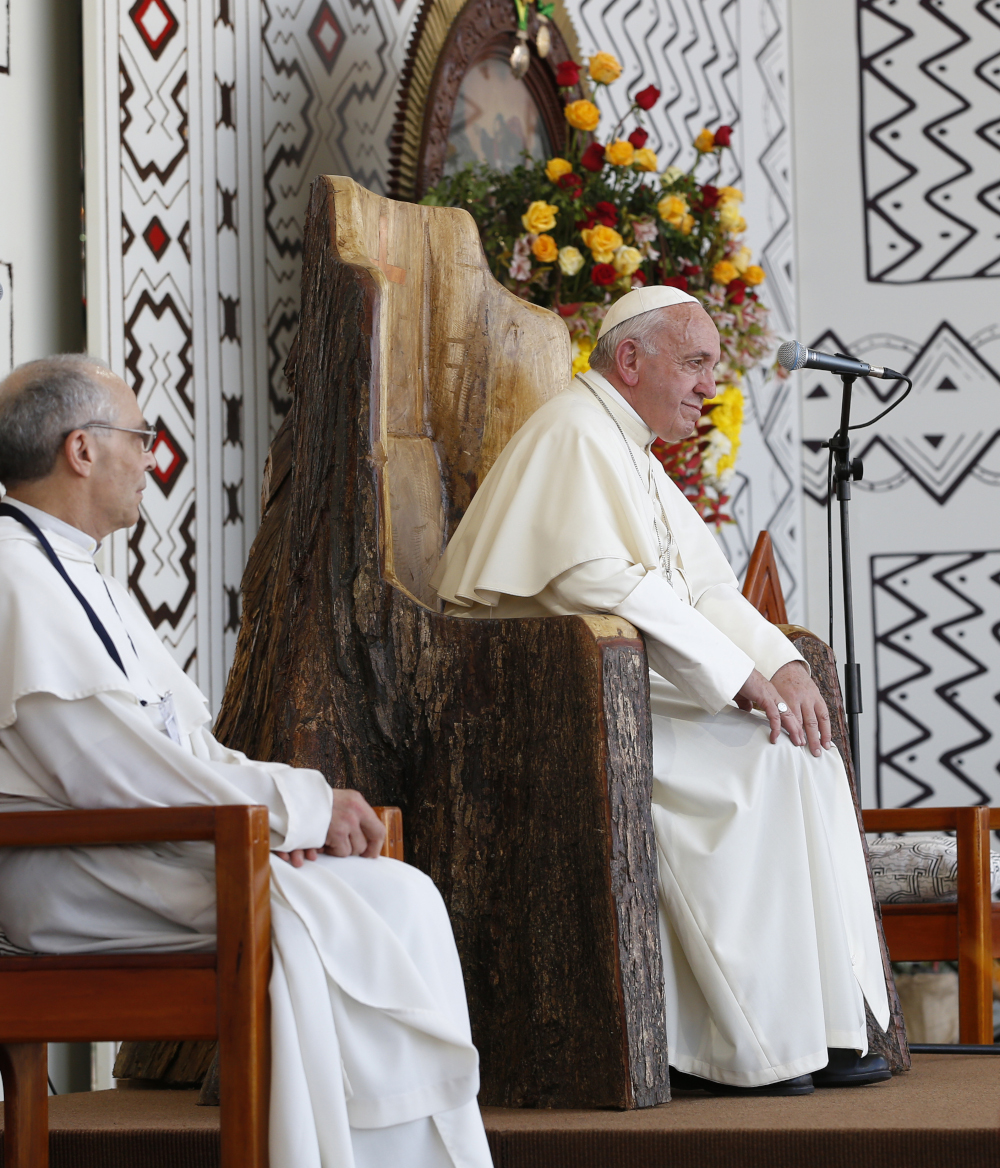 Bishop David Martinez De Aguirre Guinea of Puerto Maldonado, Peru, looks on as Pope Francis listens leads a meeting with people at the Jorge Basadre Institute in Puerto Maldonado Jan. 19, 2018. The Synod of Bishops for the Amazon will take place at a time when "both human and natural life are suffering serious and perhaps irreversible destruction," Martinez said in a Sept. 12, 2019, article. (CNS/Paul Haring)

The Synod of Bishops for the Amazon will help the Catholic Church make its presence felt and voice heard in a region that is dangerously approaching "a point of no return," said the special secretaries of the synod.

"It is a great and continuing challenge for the Catholic Church to make the original Amazonian peoples feel part of it and contribute to it with the light of Christ and the spiritual richness that shines in their cultures," Cardinal-designate Michael Czerny and Bishop David Martinez De Aguirre Guinea wrote in an article published Sept. 12 in La Civilta Cattolica, the Jesuit journal.

Czerny, undersecretary of the Migrants and Refugee Section of the Vatican Dicastery for Promoting Integral Human Development, and Martinez, apostolic vicar of Puerto Maldonado, Peru, said the synod will take place at a time when "both human and natural life are suffering serious and perhaps irreversible destruction."

The synod, scheduled for Oct. 6-27, will focus on "Amazonia: New paths for the church and for an integral ecology."

As special secretaries, Czerny and Martinez will assist Brazil's Cardinal Claudio Hummes, synod relator general, in providing a comprehensive outline of the synod's theme at the beginning of the meeting and summarizing the speeches of synod members before work begins on concrete proposals for the pope.

In the article, titled "Why the Amazon merits a synod," the prelates said that the synod for the Amazon is an effort to implement "'Laudato Si' in this fundamental human and natural environment."

Much like Pope Leo XIII's 1891 encyclical "Rerum Novarum" recognized the exploitation of workers in the early days of the industrial revolution, Pope Francis' observations on the "gross inequality and cruel marginalization" caused by financial and consumerist greed call "for a new attitude toward nature and the social environment."

"This new synthesis is a wake-up call to the entire world, to all of humanity," they wrote. "But it also suggests a new socio-pastoral orientation and dynamic for the church, which must understand the challenges faced by individuals and families and groups within these various dimensions."

However, Czerny and Martinez wrote that the church "cannot give spiritual guidance and pastoral care if people are understood in isolation from – i.e. not integrated with – how they live and function within the actual natural, economic and social conditions that they face."

They also noted that the crisis facing the region is not limited only to environmental problems such as pollution, privatization of natural goods and trafficking.

"Mercantilism, secularization, the throwaway culture and the idolatry of money" coupled with decreasing numbers of priests and religious "is endangering the presence of the Catholic Church among the indigenous peoples of the Amazon."

Such challenges, they added, require a response that moves from a "ministry of visits to a ministry of presence."

"This is why, during the October Synod, the entire world should walk with the people of the Amazon; not to expand or divert the agenda, but to help the synod to make a difference," the prelates wrote. "The Amazon region is huge, and its challenges are immense. If destroyed, the impacts will be felt worldwide."