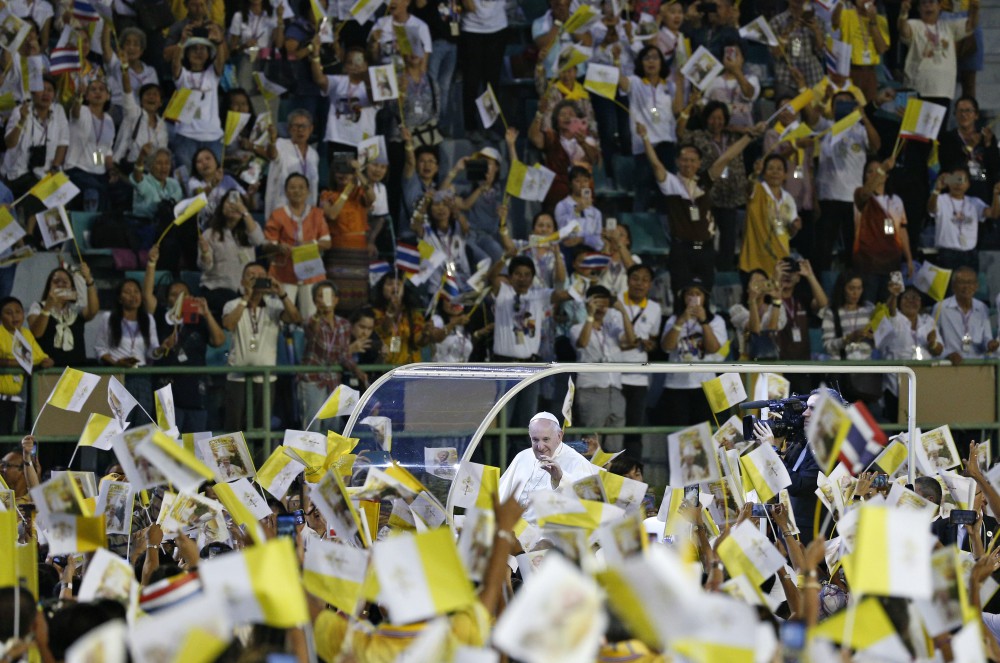 Pope Francis greets the crowd as he arrives to celebrate Mass in National Stadium in Bangkok Nov. 21, 2019. (CNS photo/Paul Haring)

Traveling abroad has become a staple of the modern papacy. In most years, the bishop of Rome takes an average of three or four voyages outside Italy, sometimes visiting a dozen countries in places across the globe.

As with many other things, the coronavirus outbreak has changed all that. In fact, it looks likely 2020 will be the first year the pope does not travel abroad since 1979.

The Vatican announced March 23 that Pope Francis' planned one-day visit to Malta, scheduled for May 31, has been indefinitely postponed. And another visit in the works — to Indonesia, Papua New Guinea and Timor-Leste — is reportedly being put off until at least 2021.

Christopher Bellitto, a historian who has written extensively on the history of the papacy, said the Vatican's decision to suspend papal travel makes sense, given the worry that any crowds gathering to see Francis would spread the virus.

The historian mentioned that the modern role of popes traveling abroad only began with Pope Paul VI, who started the tradition by visiting the Holy Land in 1964.

"Papal travel outside Europe is a late-20th-century phenomenon," said Bellitto, a professor of history at Kean University in New Jersey. "So, a sensible suspension of travel like this isn't anything special ... and totally understandable in the circumstances."

Pope John Paul II cemented the practice of papal travel with 104 foreign trips, voyaging abroad at least once each year from 1979 to 2004. Pope Benedict XVI continued the practice, albeit at a slower pace, making 24 trips from 2005 to 2012.

Francis has made 32 visits abroad. 2019 was his busiest year yet, with seven visits that included stops in 11 countries. The last trip, to Thailand and Japan, took place in November.

Another visit that had been under consideration for 2020 was to South Sudan. Francis has repeatedly expressed a desire to make a first-of-its-kind voyage there together with the Anglican archbishop of Canterbury, in order to support the country's ongoing peace process.

The only other firm commitment currently on the pope's schedule is to go to Portugal in 2022 for the celebration of the next global World Youth Day.

Bellitto noted that although Francis is unable to travel abroad because of the virus, he has made the unprecedented decision to livestream his daily Mass at the Vatican's Casa Santa Marta.

"What's different here is the ability of a pope to use technology that never existed before the last few papacies," said the historian. "In a way, he is shrinking the world and may be our best beacon of sanity and stability."