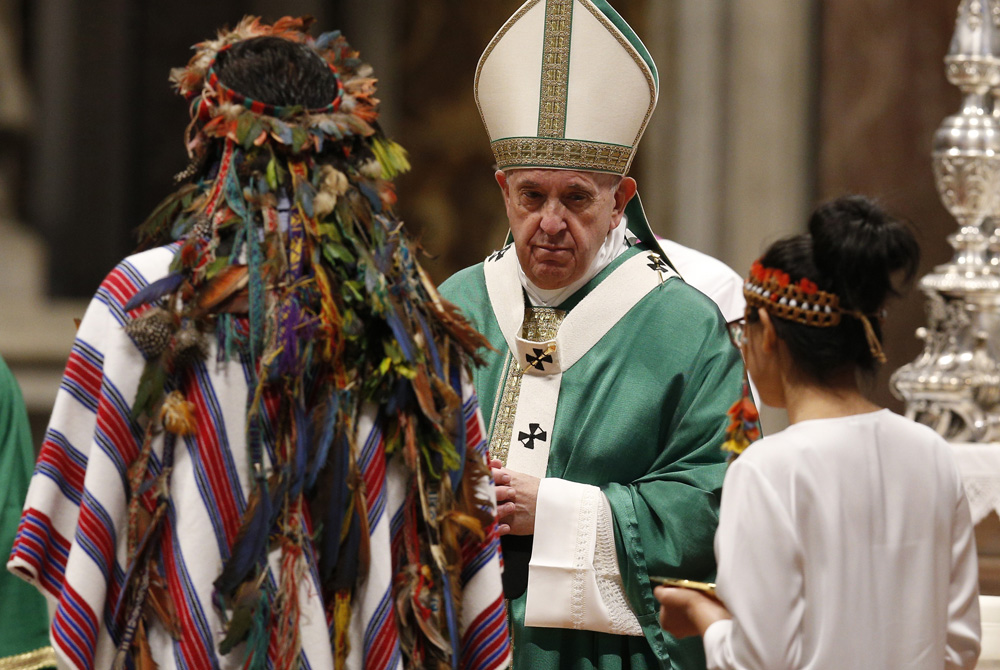 Pope Francis accepts offertory gifts from indigenous people as he celebrates the concluding Mass of the Synod of Bishops for the Amazon at the Vatican in this Oct. 27, 2019, file photo. (CNS/Paul Haring)

Pope Francis' apostolic exhortation on the Amazon disappointed those hoping for an opening of clerical roles to married men and women, with many noting that the pope failed to extend his prophetic voice about environmental injustice to injustices in his own house, the church. Many women were especially outraged over the document's language of complementarity.

Querida Amazonia ("Beloved Amazon"), the pope's response to last October's Synod of Bishops, did not grant the bishops' request to open priestly ordination to married men and the possibility of women deacons, both in an effort to address the severe lack of ministers in the nine nations of that region.

Reading the document was "demoralizing" and "painful," especially given the pope's lyrical language about his dreams for the region, said Casey Stanton, who works in parish ministry and said she is called to the diaconate.

"But then you get to the paragraphs about women … and it just feels like the dream stops short of including them and including me," said Stanton, a minister of adult faith formation at Immaculate Conception Church in Durham, North Carolina.

She admitted that she did not expect a change in church teaching from the papal document, but "just wanted him to keep the conversation open in this slow-moving church."

"Instead, I think what the pope has done in this document is to close the door," she said.

After the testimony of women at the synod, the pope's response is "willful blindness," Stanton said, adding, "I can't imagine what the women in the Amazon feel."

The needs of the people

Those who work for church reform also reacted negatively to the Feb. 12 release of the document.

"We are profoundly shocked and disappointed," said Linda Pinto, co-chair of CORPUS, a church reform group that advocates for an inclusive priesthood.

"With Querida Amazonia, the Pope is willfully turning his back on the calls of women for recognition of the sacramental ministries they offer the people of the Amazon and the global church," said a statement from the Women's Ordination Conference (WOC), which noted the lack of women as official participants in the synod.

"This shows, yet again, that a synod without the equal voice and votes of women will never produce fruit that satisfies the urgent needs of the people of God," the WOC statement said.

During the synod in October 2019, representatives from the Amazon reported that Catholics sometimes go months without the Eucharist because of a lack of clergy, especially in rural regions.

Querida Amazonia emphasizes the importance of the Eucharist, but rather than respond to the bishops' request for allowing ordination of married men, the pope urges church leaders "not only to promote prayer for priestly vocations, but also to be more generous in encouraging those who display a missionary vocation to opt for the Amazon region." 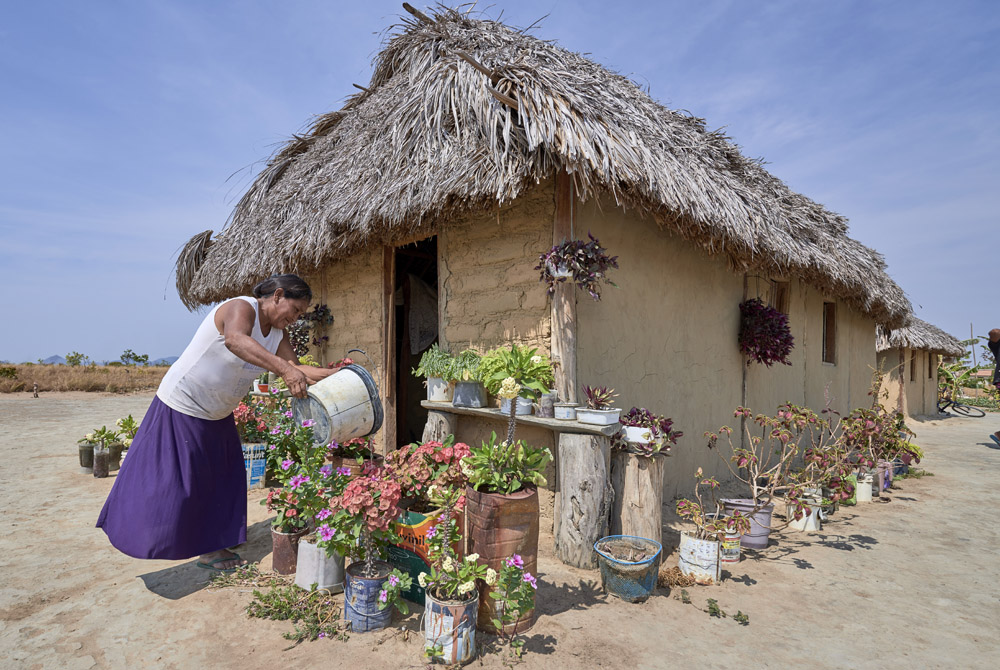 Theologian Dan Cosacchi said he was trying to avoid an "ideological reaction," but noted that "prayers for vocations to the priesthood, by themselves, simply are not enough for these people. More action is required."

"I am reflecting on this document from a socioeconomic location where I own a car and can attend a Eucharistic liturgy at a dozen different places, at a convenient time of day for me, all within a five-minute radius from where I live and work," Cosacchi told NCR in a written comment.

"I remember the many Catholics in countless Amazonian regions and communities who have gone years since being able to attend such a Eucharistic celebration," said Cosacchi, assistant professor of religious studies at Marywood University in Scranton, Pennsylvania.

At least one Latin American commentator noted that because expectations had been raised about the possibility of openness on the issue of married clergy and women deacons, the disappointment was greater. "A unique historic occasion has been lost," said José Manuel Vidal, director of the Spanish-language Religión Digital.

Still 'on the table'?

In a press conference following the release of the papal document in Rome, Canadian Cardinal Michael Czerny said proposals in the synod's final document that may not be mentioned in Querida Amazonia "remain on the table," according to NCR Vatican correspondent Joshua McElwee.

Czerny was responding to a question about the possibility of priestly ordination of "viri probati," older men of proven character, often already serving as deacons.

But the document's use of the language of complementarity and warnings about a "functional approach" in the section on "The strength and gift of women" did not raise optimism about further discussion of women deacons.

The document criticized a "reductionism [that] would lead us to believe that women would be granted a greater status and participation in the Church only if they were admitted to Holy Orders."

"Women make their contribution to the Church in a way that is properly theirs, by making present the tender strength of Mary, the Mother," the pope wrote, adding, "This shows the kind of power that is typically theirs."

"That approach would in fact narrow our vision; it would lead us to clericalize women, diminish the great value of what they have already accomplished, and subtly make their indispensable contribution less effective," the document said.

Theologian Natalia Imperatori-Lee said she was going to take up Pope Francis on his invitation, in an earlier part of the document, to feel outrage, especially about his continued use of "spousal" language in the section about women.

"The pope seems to want it both ways. A fundamental equality with a differentiation of roles," Imperatori-Lee said to NCR in an emailed response.

But the spousal metaphor contains a "fundamental inequality," she said. "Men are to women as Christ is to the church. That is not equality in any sense. … When we transpose this to the human realm with men/women in the places of Christ/church, it's misogyny."

She also noted the pope's praise of "generous women" in the Amazon who have "have kept the Church alive in those places through their remarkable devotion and deep faith."

"What strikes me about the way Francis talks about women's roles in this letter is that he envisions women as Mary the mater dolorosa, not the Mary of the Magnificat," said Imperatori-Lee, professor of religious studies at Manhattan College in New York.

"Yes, women do this. But we don't want to be called in only in hospice," she said. "We shouldn't pretend that odes to women's fierce and tender love of things on the verge of death is a compliment. We don't just want to hug the dying. We want to (and can, and have, and do) prevent it from getting that bad."