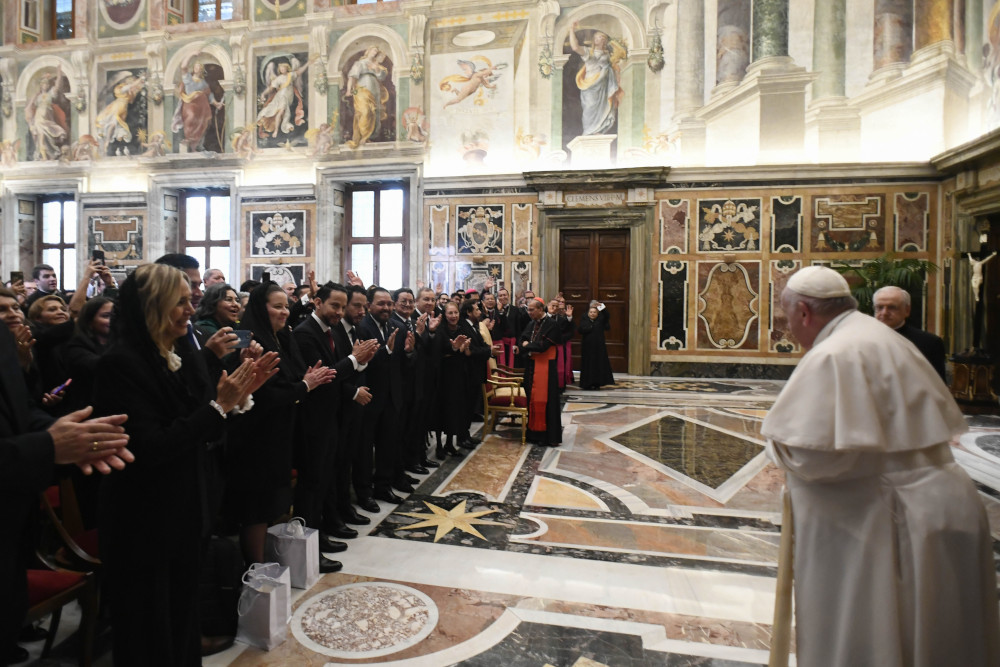 Pope Francis leads a meeting with faithful from El Salvador offering thanks for the beatification of Father Rutilio Grande, in the Clementine Hall in the Apostolic Palace at the Vatican Oct. 14, 2022. (CNS photo/Vatican Media)

The struggle for justice and love for all people is not over, but the battle must be evangelical and never political, Pope Francis told a group of Catholics from El Salvador.

This effort, which is "a spiritual journey of prayer, of struggle, must sometimes take the form of a denunciation, of protest, never political, always evangelical," he told the group, which was led by Archbishop José Luis Escobar Alas of San Salvador and included Salvadoran Vice President Félix Ulloa Garay and his wife, Lilian Alvarenga de Ulloa.

The archbishop had come under criticism recently for comments he made calling the government's mass detentions -- aimed at ending gang-related homicides -- "bitter medicine," and for saying that most Salvadorans want President Nayib Bukele to run again in 2024 even though the constitution limits the post to one term. While many thought the archbishop was backing the president's reelection efforts, the archbishop denied it, saying he was only stating a fact.

The delegation from El Salvador came to the Vatican to give thanks for the January beatifications of Jesuit Father Rutilio Grande and his two companions, as well as the beatification of Franciscan Father Cosme Spessotto.

He explained his personal devotion to these martyrs, saying, "At the entrance of my study I have a small frame with a piece of the bloodstained alb of St. Oscar Romero and Rutilio Grande's small catechism to remind me that there are always injustices which we must fight, and they pointed the way."

The martyrs, the pope said, are "the most precious gift that God can give to the church" because, in them, the "greater love that Jesus showed us on the cross is renewed."

God "is the one who summoned them to this battle, who gave them the strength to achieve victory, and who now presents them to us for our edification and as a path to follow because the problems are not over, the struggle for justice and for the love of peoples continues," Francis said.

However, he said, personal witness is "enough" and is "what we have to follow."

That is why the martyrs are "a gift for our edification, an enormous gift, both for the church on pilgrimage in El Salvador and for the universal church," he said.

Quoting the homily St. Romero gave in 1977 at the funeral Mass for the murdered Father Grande, the pope said, "'Let us be inspired with this love; let us live this faith, and I assure you that there will be a solution to all of our great social problems.'"

There is a solution, the pope said.

While the current situation in the world is not the same as back then, God is still calling people "to commitment, to fidelity, to put faith in God and love for our brothers and sisters in first place, and to live in hope."

God's call is "timeless," he said, because it is the Gospel, "a living Gospel, which is not learned from books, but from the life of those who have handed down the deposit of faith to us."

Francis said, "Let us encourage one another, let us think of those among our people who are in difficulty: the poorest; prisoners; those who cannot make ends meet; the sick; the discarded. And let us thank God for being able to walk with the strength of faith to serve our people."