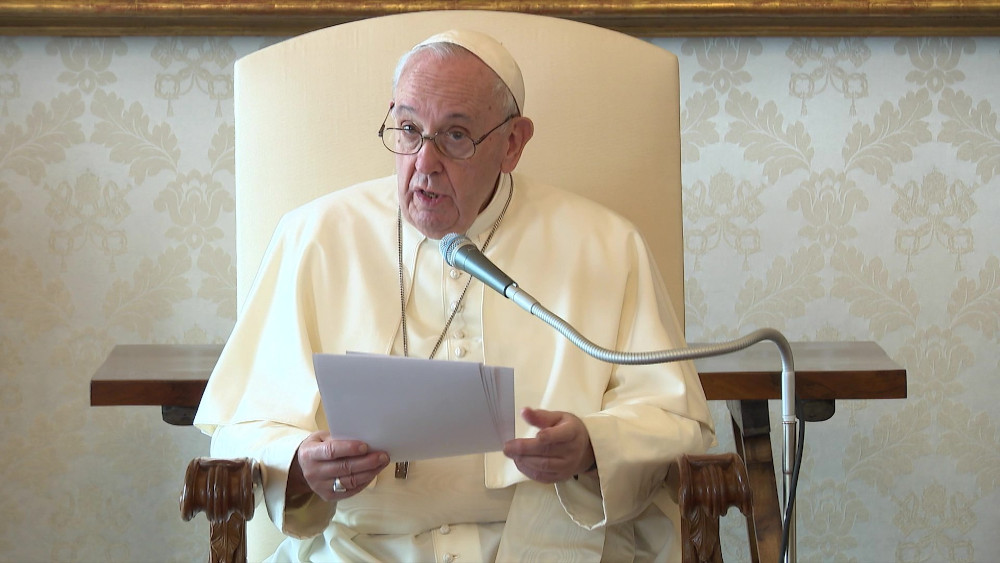 Pope Francis speaks during a meeting with experts from Moneyval, the European financial crime evaluators, at the Vatican Oct. 8, 2020, in this still image taken from a video. (CNS/Vatican Media via Reuters)

The latest financial transparency measures enacted at the Vatican are meant to restore order, ensuring money serves its purpose and does not become an object of idolatry, Pope Francis told European finance experts.

"Jesus drove merchants from the temple precincts and stated: 'You cannot serve both God and money,'" Francis said. "Once the economy loses its human face, then we are no longer served by money, but ourselves become servants of money."

The pope made the comments Oct. 8 when he met with experts from Moneyval — the Council of Europe's Committee of Experts on the Evaluation of Anti-Money Laundering Measures and the Financing of Terrorism.

The experts began a two-week onsite inspection of the Holy See and Vatican City State in late September; the visit originally was scheduled for April but was postponed due to the coronavirus pandemic.

"The measures that you are evaluating are meant to promote a 'clean finance,' in which the 'merchants' are prevented from speculating in that sacred 'temple,' which, in accordance with the Creator's plan of love, is humanity," he said.

According to the Moneyval website, the program is designed to "assess its members' compliance with all relevant international standards in the legal, financial and law enforcement sectors through a peer review process of mutual evaluations, including assessment of effectiveness of the implemented measures in practice" and to "formulate recommendations on ways to improve the effectiveness of domestic regimes to combat money laundering and terrorist financing and states’ capacities to co-operate internationally in these areas."

Francis, who enacted new transparency laws in June covering contracts for the purchase of goods, property and services for both the Roman Curia and Vatican City State offices, welcomed the experts and said their work "is particularly dear to my heart."

The pope has sought to further centralize control over the Vatican's finances as Italian media continued to report on alleged financial malfeasance by Cardinal Angelo Becciu, former prefect of the Congregation for Saints' Causes. 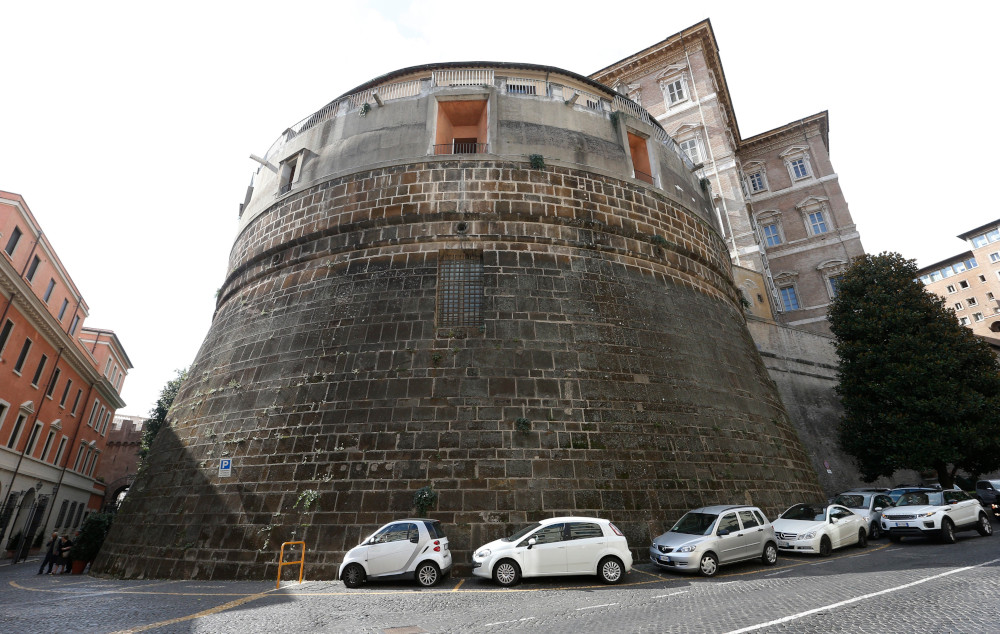 The tower of the Institute for the Works of Religion, often referred to as the Vatican bank, is pictured in this 2019 photo file photo. European financial crime evaluators from Moneyval began a regularly scheduled visit to the Vatican Sept. 30. (CNS/Paul Haring)

Becciu, who was forced to retire Sept. 24, previously served as "sostituto," a position similar to chief-of-staff in the Vatican Secretariat of State, from 2011 to 2018.

The cardinal said he was accused of embezzling an estimated 100,000 euros ($116,361) of Vatican funds and redirecting them to Spes, a Caritas organization run by his brother, Tonino Becciu, in his home Diocese of Ozieri, Sardinia.

However, even after the cardinal was forced to resign, Italian media continued reporting on questionable financial transactions that the Italian cardinal allegedly made with Vatican funds during his tenure at the Secretariat of State.

In his address to Moneyval, the pope said that preventing the use of money for terrorism and other illegal activities relates to the "protection of life, the peaceful coexistence of the human race on earth, and a financial system that does not oppress those who are weakest and in greatest need."

"It seems that in many places, the supremacy of money over human beings is taken for granted," he said. "Sometimes, in the effort to amass wealth, there is little concern for where it comes from, the more or less legitimate activities that may have produced it, and the mechanisms of exploitation that may be behind it."

As a result, he added, in using money obtained through shady practices, "we get blood on our hands, the blood of our brothers and sisters."

Echoing St. Paul VI's proposal to divert military spending into a global fund for the poor, the pope suggested that "instead of investing in fear or nuclear, chemical and biological threats, we use those resources finally to put an end to hunger and favor development in the most impoverished countries, so that their citizens will not resort to violent or illusory solutions, or have to leave their countries in order to seek a more dignified life."

Francis highlighted the need for morality in economic matters at a time when financial exploitation "fundamentally aimed at quick profit continues to wreak havoc."

"In light of the present circumstances, it would seem that the worship of the ancient golden calf has returned in a new and ruthless guise in the idolatry of money and the dictatorship of an impersonal economy lacking a truly human purpose," he said.