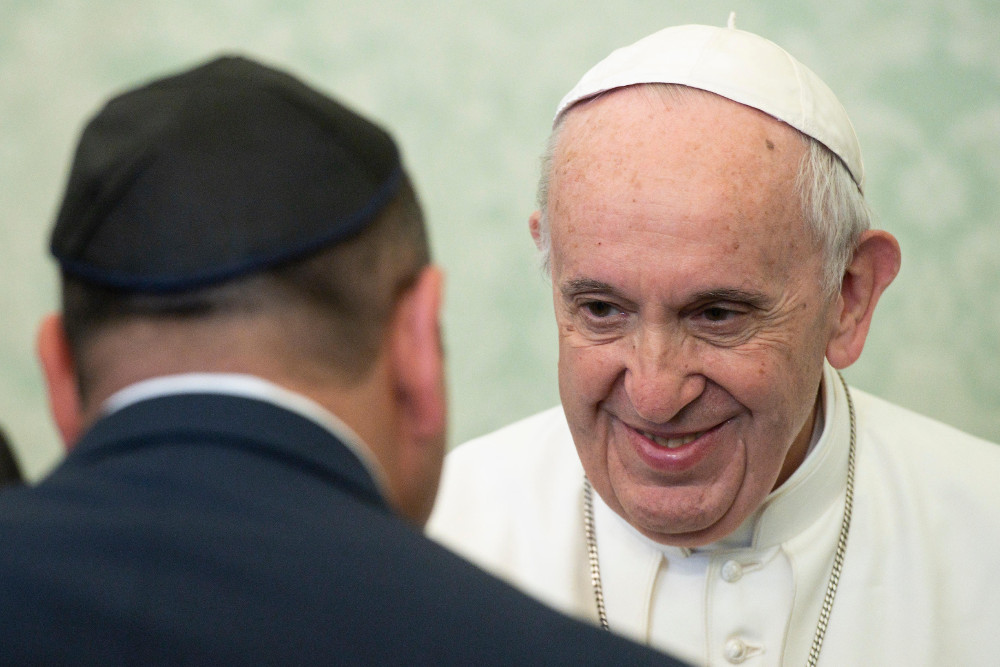 Pope Francis greets a rabbi during an audience with a group of rabbis attending the World Congress of Mountain Jews, at the Vatican Nov. 5. (CNS/Vatican Media)

Sharing the same roots as their Jewish brothers and sisters, Christians cannot be anti-Semitic and must work to ensure anti-Semitism is banned from society, Pope Francis said.

Also, he said, "the Holocaust must be commemorated so that there will be a living memory of the past. Without a living memory, there will be no future, for if the darkest pages of history do not teach us to avoid the same errors, human dignity will remain a dead letter."

The pope made his remarks during an audience Nov. 5 with a group of rabbis attending the World Congress of Mountain Jews.

Mountain Jews — who are believed to be descendants of Persian Jews — settled centuries ago in the Caucasus region, maintaining their own unique language and various customs. They were also targeted and exterminated by German troops during World War II.

Speaking to the delegates, the pope expressed his joy that their visit marked the first time their community visited a pope at the Vatican. Pope Francis had met with Mountain Jews during his 2016 visit to Azerbaijan.

The pope anticipated the commemoration Nov. 9 of the 80th anniversary of Kristallnacht when Jews, their property and places of worship were attacked throughout Nazi Germany. The attacks, he said, represented an intent to uproot "from the hearts of individuals and a people that which is absolutely inviolable: the presence of the Creator."

"The attempt to replace the God of goodness with the idolatry of power and the ideology of hatred ended in the folly of exterminating creatures," he added.

This is why, he said, "religious freedom is a supreme good to be safeguarded, a fundamental human right and a bulwark against the claims of totalitarianism."

"Sadly, anti-Semitic attitudes are also present in our own times," Pope Francis told his audience.

"As I have often repeated, a Christian cannot be an anti-Semite; we share the same roots. It would be a contradiction of faith and life," he said. "Rather, we are called to commit ourselves to ensure anti-Semitism is banned from the human community."

The pope emphasized the importance of friendship between Jews and Catholics, saying "we are called to promote and to expand interreligious dialogue for the sake of humanity."

"I ask the Almighty to bless our journey of friendship and trust, so that we can dwell always in peace and be, wherever we find ourselves, artisans and builders of peace."