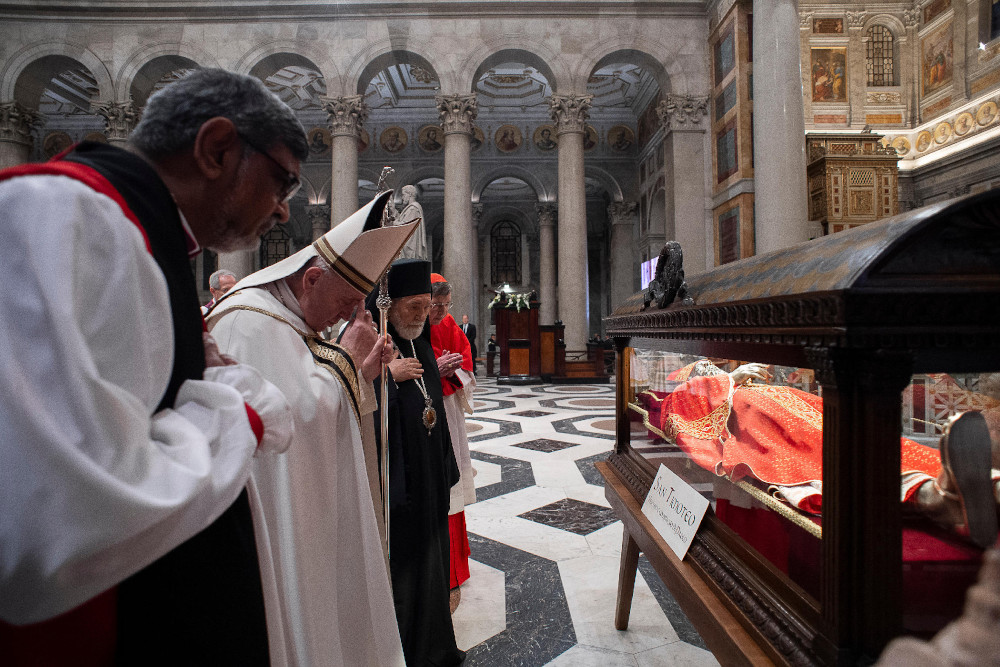 Christian leaders venerate the relics of St. Timothy during a prayer service in Rome's Basilica of St. Paul Outside the Walls Jan. 25, 2020. From left are Anglican Archbishop Ian Ernest, director of the Anglican Centre in Rome; Pope Francis; Orthodox Metropolitan Gennadios of Italy; and Cardinal Kurt Koch, president of the Pontifical Council for Promoting Christian Unity, (CNS/Vatican Media)

As Christians work and pray for the restoration of full unity among them, they must be willing to learn from one another, even from the smallest of the Christian communities, Pope Francis said.

"Each community has a gift to offer to the others," the pope said Jan. 25 at the end of the Week of Prayer for Christian Unity.

"The more we look beyond partisan interests and overcome the legacies of the past in the desire to move forward toward a common landing place, the more readily we will recognize, welcome and share these gifts," he said in his homily during evening prayer at Rome's Basilica of St. Paul Outside the Walls.

The service began with Francis, Orthodox Metropolitan Gennadios of Italy and Anglican Archbishop Ian Ernest, director of the Anglican Centre in Rome, praying at the tomb of St. Paul and venerating the relics of the apostle's friend and co-worker, St. Timothy.

In his letters to Timothy, which are part of the New Testament, St. Paul calls the younger evangelizer his "child in faith." His relics were brought to Rome from Termoli, in southern Italy, for the week of prayer.

The theme of the 2020 week was drawn from the account in the Acts of the Apostles of St. Paul being shipwrecked in Malta.

Although, as a prisoner, "he was among the most vulnerable" onboard, Francis said, Paul offered words of hope to the others and advice based on his trust in God that none of them would lose their lives in the storm.

"This account from the Acts of the Apostles also speaks to our ecumenical journey toward that unity which God ardently desires," Francis said. For one thing, "it tells us that those who are weak and vulnerable, those who have little to offer materially but find their wealth in God, can present valuable messages for the good of all."

"Even the smallest and least significant" Christian communities in the eyes of the world, "if they experience the Holy Spirit, if they are animated by love for God and neighbor, have a message to offer to the whole Christian family," he said. That is especially true of "marginalized and persecuted Christian communities."

The biblical account also shows God's desire to save everyone, the pope said, which is why Christian churches and communities must not focus exclusively on internal matters, but "open ourselves to the good of all, to the universal gaze of God who took flesh in order to embrace the whole human race and who died and rose for the salvation of all."

The account of the shipwreck ends with praise for the hospitality the people and governor of Malta showed to St. Paul and the rest of their unexpected guests.

"From this Week of Prayer, we want to learn to be more hospitable, in the first place among ourselves as Christians and among our brothers and sisters of different confessions," the pope said.