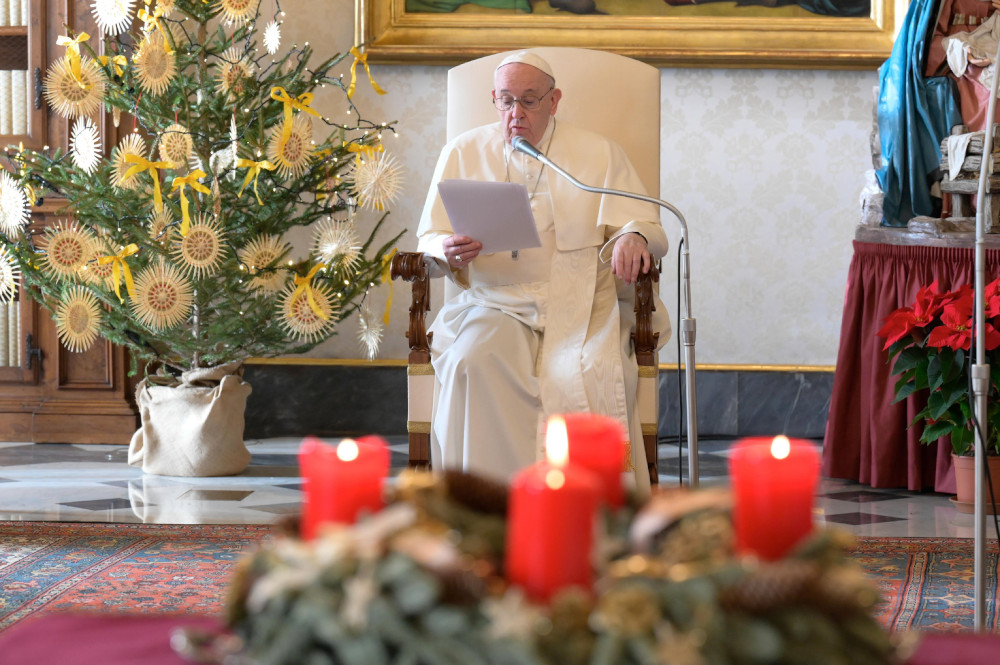 Pope Francis leads his weekly general audience Dec. 23, 2020, from the library of the Apostolic Palace at the Vatican. The pope said that in many places “consumerism has highjacked Christmas,” so Christians must make sure their celebrations focus on the goodness of God who sent Jesus to save all people. (CNS photo/Vatican Media)

While Christmas has become a universal holiday, even for many nonbelievers, its celebration always should focus on the reality that God sent his son into the world to save humanity, Pope Francis said.

Christmas must not be confused with "ephemeral things" that reduce the celebration of Christ's birth "to a merely sentimental or consumerist festival," the pope said Dec. 23 during his weekly general audience.

"Last Sunday, I called attention to this problem, underlining that consumerism has hijacked Christmas," he said, departing from his prepared remarks. "No! Christmas must not be reduced to just a sentimental or consumerist feast (that is) full of gifts and good wishes but poor in Christian faith and poor in humanity as well."

Interrupting his series of talks on prayer, the pope reflected on the celebration of Christmas and the need to curb its observance from a "certain worldly mentality, incapable of grasping the incandescent core of our faith."

St. John's assertion that "the Word became flesh and dwelt among us," he said, "is the nucleus of Christmas. Actually, it is the truth of Christmas; there is no other."

"Christmas invites us to reflect, on the one hand, on the drama of history in which men and women, wounded by sin, ceaselessly search for truth, mercy, redemption; and, on the other hand, on the goodness of God, who has come toward us to communicate to us the truth that saves us and to make us sharers in his friendship and his life," the pope said. "This gift of grace is pure grace, without merit on our part."

The grace that comes with the Christmas season, he said, also can remove "from our hearts and minds the pessimism that has spread today as a result of the pandemic."

"We can overcome that sense of disquieting bewilderment, not letting ourselves be overwhelmed by defeats and failures, in the rediscovered awareness that that humble and poor child, hidden away and helpless, is God himself made man for us."

Pope Francis invited Christians to prepare to celebrate Christmas by contemplating the Nativity scene and "letting the wonder of the 'marvelous' way in which God wanted to come into the world be reborn in us."

"While the pandemic has forced us to be more distant" from one another, he said, "Jesus, in the manger, shows us the way of tenderness to be close to each other, to be human. Let us follow this path."