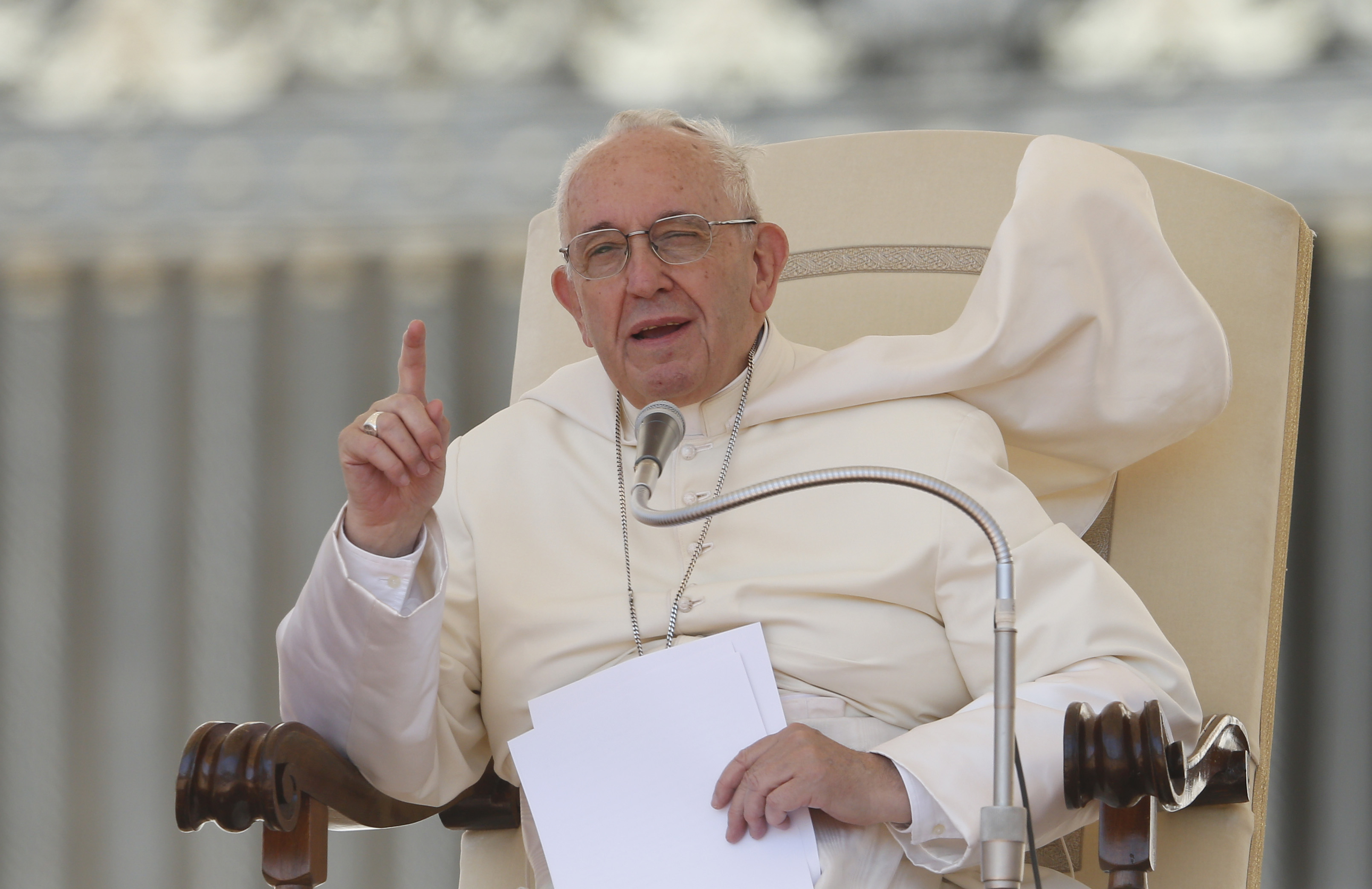 Pope Francis gestures as he speaks during his general audience in St. Peter's Square at the Vatican June 27. (CNS/Paul Haring)

God always loves and generously gives first before asking for fidelity to his commandments -- which are the words of a loving father showing people the right way to live, Pope Francis said.

"Christian life is above all the grateful response to a generous father," not a forced, joyless compliance to a series of obligations, the pope said June 27 at his general audience in St. Peter's Square. It was to be the last general audience before a brief suspension for the month of July.

Before riding through the square in his popemobile, greeting visitors, the pope met with the ill and infirm, who were offered seating in the air-conditioned Paul VI audience hall, where they could comfortably follow the catechesis in the square on large video screens.

Greeting the crowd, he told a group on pilgrimage to Rome offered by Deaf Catholic Youth Initiative for the Americas that every pope and "the Lord has a special place in his heart for whoever has any kind of disability."

Later in the square, the pope continued his new series of audience talks on the Ten Commandments by reflecting on how God first liberated his people from slavery in Egypt, then revealed the commandments to Moses.

"God never asks without giving first. Never. He saves first, then asks" for fidelity to his commandments, which are the "loving words of a father" to his children so they can journey on the right path through life.

This is "the secret" to the Christian approach, which is Jesus' approach -- to know one is loved by a father and to love others in turn, the pope said. Jesus "doesn't start with himself, but with the father," he added.

Projects or efforts fail when they are rooted in selfishness, not in "gratitude" to the Lord, the pope said.

The foundation of everything a Christian does isn't based on a sense of obligation: "I must do this, this, this ..." he said.

"No. The foundation of this duty is the love of God, the father, who gives first and then commands," he said; it's a situation based on a relationship and personal experience between father and child.

"To put the law before the relationship does not help the journey of faith. How can a young person want to be Christian if we start with obligations, tasks, consistency and not with liberation?"

"To be Christian is a journey of liberation. The commandments liberate you from your own self-centeredness, and they liberate you because there is God's love to carry you forward."

Christian formation is not about willpower, but about opening one's arms to salvation and letting oneself be loved, he said.

Francis said it is important for people to ask themselves, "How many beautiful things has God done for me?" Recognizing all these gifts "liberates us," he said.

But it can also happen, he said, that people have not had this liberating experience, and they still live their faith from a sense of obligation -- a spirituality that is lived "slavelike" not like sons and daughters of God.

When this is the case, the pope said, people must cry out to God for their own exodus.

"We are not saved by ourselves, but we can start with a cry for help, 'Lord, save me. Lord, teach me the way. Lord, caress me. Lord, give me a little joy.'"

It is up to the individual to cry for help, cry for liberation from selfishness, sin and the bonds of slavery, the pope said. "This cry is important; it is prayer, it is awareness of what is still oppressed and not freed within us."

God is waiting to hear people's cry for liberation and salvation; "he wants to break our chains. God did not call us to life in order to remain oppressed, but to be free and live in gratitude, obeying with joy" the Lord who gave more than anyone could ever give back, he said.