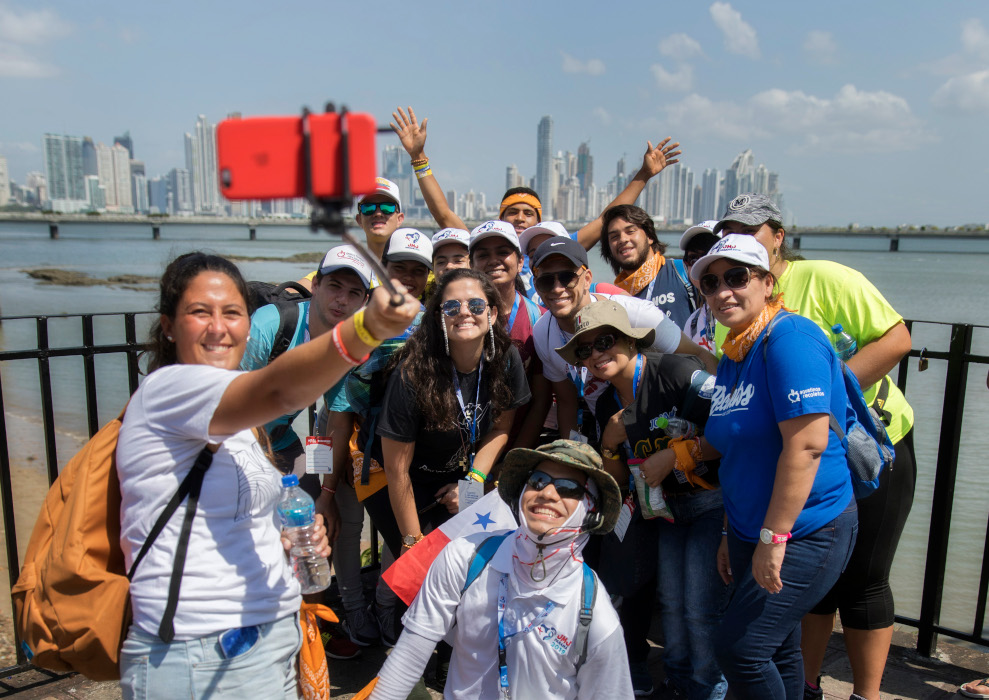 World Youth Day pilgrims from Honduras and Costa Rica take selfies with the skyline of Panama City in the background on Jan. 20, 2019. The fast-paced nature of the digital age can cause young men and women to focus more on capturing moments for their social media rather than experiencing them, Pope Francis said in his message for World Youth Day 2020. (CNS/Catholic Standard/Jaclyn Lippelmann)

The fast-paced nature of the digital age can cause young men and women to focus more on capturing moments for their social media rather than experiencing them, Pope Francis told Catholic young people.

Both young people and adults can "waste their lives with superficial things, thinking they are alive while in fact they are dead within," seeking gratification through entertainment and fleeting moments while giving in to "widespread growing digital narcissism," the pope said in his message for World Youth Day 2020.

"All too many people are living this way! Some of them have perhaps bought into the materialism of those all around them who are concerned only with making money and taking it easy, as if these were the sole purpose of life," the pope said.

"In the long run," he added, "this will inevitably lead to unhappiness, apathy and boredom with life, a growing sense of emptiness and frustration."

The message, released March 5 at the Vatican, centered on a verse from the Gospel of Luke: "Young man, I say to you, arise!"

Francis chose several verses that reflect on the call to "arise" and "stand up" as the themes for World Youth Day 2020-2022. This year and next, World Youth Day will be celebrated on a local level — on Palm Sunday at the Vatican — and in 2022 it will be an international gathering in Lisbon.

The theme for World Youth Day 2020, the pope said, was what Jesus said before raising a young man from the dead.

Christ's gesture of compassion toward the suffering of the boy's widowed mother is a reminder for young people today that "sometimes our first reaction is to take a picture with our cellphone without even bothering to look into the eyes of the persons involved."

"All around us, but at times also within us, we can see realities of death: physical, spiritual, emotional, social. Do we really notice them, or simply let them happen to us? Is there anything we can do in order to restore life?" the pope asked.

Jesus shows young men and women the importance of compassion and empathy toward the suffering of others rather than being self-absorbed, the pope said.

"Do not let yourselves be robbed of this sensitivity!" he said. "May you always be attentive to the plea of those who are suffering, and be moved by those who weep and die in today's world."

Just as Christ's gesture brought the boy back to life, "one sign of closeness, simple yet concrete, can awaken forces of resurrection" in those who are suffering, the pope said.

"If you can feel God's immense love for every living creature — especially our brothers and sisters who experience hunger and thirst, or are sick or naked or imprisoned — then you will be able to draw near to them as he does," the pope said. "You will be able to touch them as he does and to bring his life to those of your friends who are inwardly dead, who suffer or have lost faith and hope."

Francis encouraged young people to not only let their lives be restored by God, but to share that life with others through meaningful relationships that aren't "superficial, false and hypocritical."

"Today, we are often 'connected' but not communicating. The indiscriminate use of electronic devices can keep us constantly glued to the screen. With this message, I would like to join you, young people, in calling for a cultural change, based on Jesus' command to 'arise,'" the pope said.

"If this is our message, many young people will stop looking bored and weary and let their faces come alive and be more beautiful than any virtual reality," Francis said. "If you give life, someone will be there to receive it."