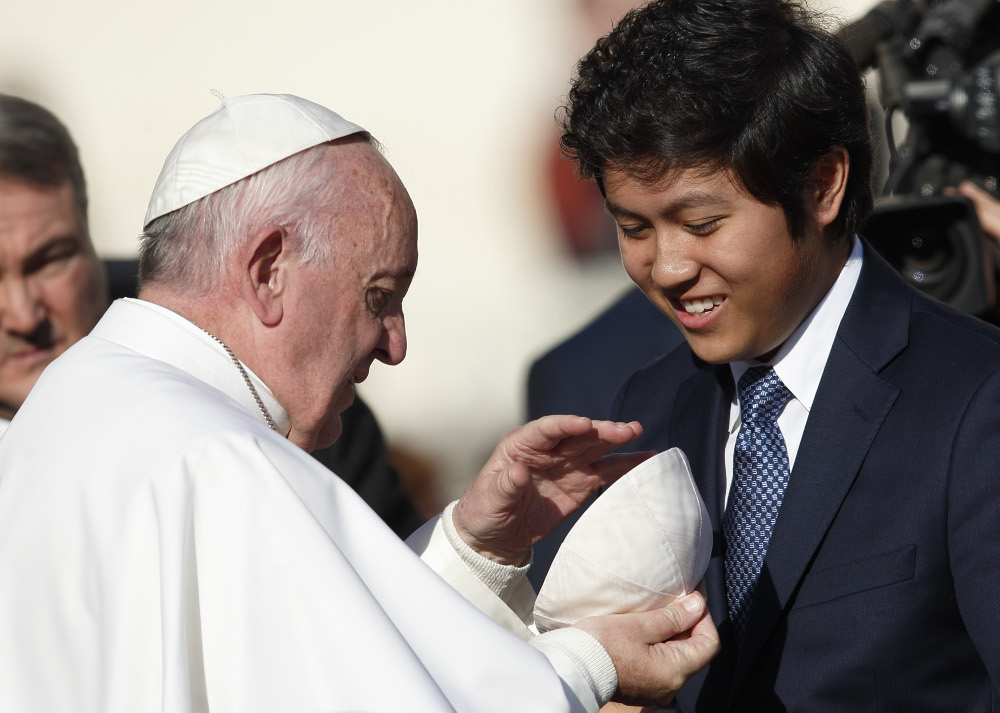 Pope Francis accepts a zucchetto from a young man during his general audience in St. Peter's Square at the Vatican Nov. 22. (CNS/Paul Haring)

If people really understood that participating at Mass is witnessing Christ's suffering, death and resurrection, then maybe they would stop taking pictures, talking, making comments and acting as if it were some kind of show, Pope Francis said.

"This is Mass: to enter into Jesus' passion, death, resurrection and ascension. When we go to Mass, it is as if we were going to Calvary, it's the same," the pope said Nov. 22 during his weekly general audience.

If people realize that Jesus is truly present in the Eucharist and is letting himself be broken and pouring out his love and mercy for everyone, "would we allow ourselves to chitchat, take pictures, to be on show? No," the pope said.

"For sure we would be silent, in mourning and also in joy for being saved," he said.

The pope continued his series of audience talks on the Mass, reflecting on what Mass really is and why it is so important.

The Mass, as a "memorial," is more than just remembering an event from the past, the pope said. It is making that event present and alive in a way that transforms those who participate.

The Eucharist is the focal point of God's saving act, he said; it is Jesus making himself present in the bread, "broken for us, pouring out all of his mercy and love on us like he did on the cross, in that way, renewing our hearts, our lives and the way we relate to him and our brothers and sisters."

"Every celebration of the Eucharist is a beam of that sun that never sets, which is the risen Jesus Christ. To take part in Mass, especially on Sundays, means entering into the victory of the resurrection, being illuminated by his light, warmed by his heat," he said. Mass is "the triumph of Jesus."

As Jesus goes from death to eternal life during the Mass celebration, he is seeking also to "carry us with him" toward eternal life, Pope Francis said.

By spilling his blood, the pope continued, "he frees us from death and the fear of death. He frees us not only from the domination of physical death but also spiritual death — evil and sin," which pollute one's life, making it lose its beauty, vitality and meaning.

"In the Eucharist, (Jesus) wants to transmit his paschal, victorious love," the pope said. "If we receive it with faith, we too can truly love God and our neighbor, we can love like he loved us, giving life."

When people experience the power of Christ's love within them, then they can give themselves freely and fully to others, even their enemies, without fear, he said.