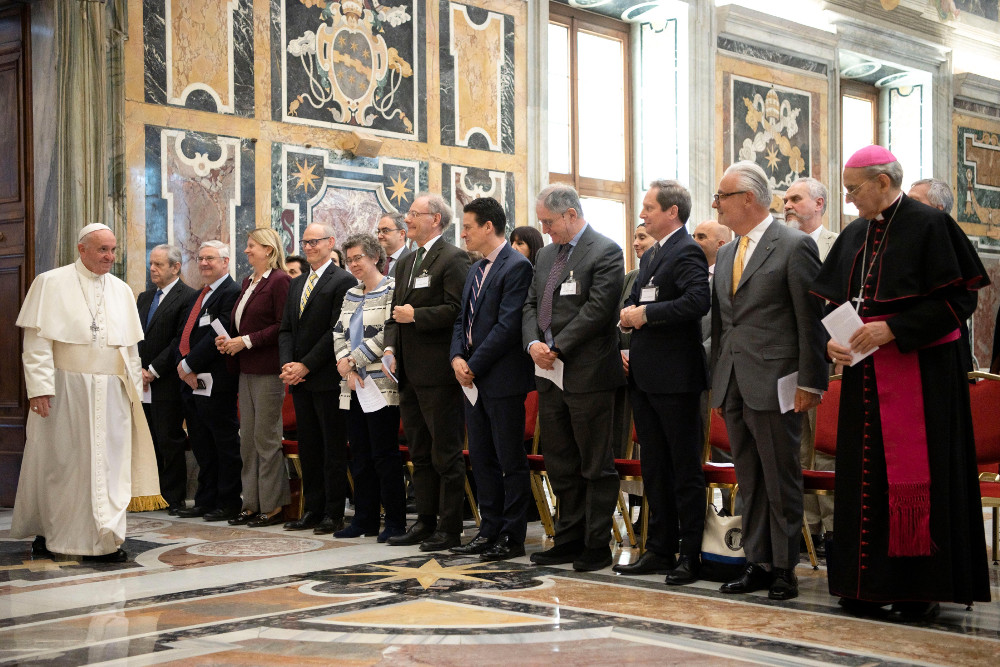 Pope Francis arrives for a meeting with participants attending the plenary meeting of the Pontifical Academy of Social Sciences at the Vatican May 2, 2019. (CNS/Vatican Media)

Migrants are not a threat to a nation's culture, traditions and values, Pope Francis said.

Every nation is a product of immigration and the integration of diverse peoples, united by specific values, cultures and "healthy traditions," he said.

That is why any nation that "stirs up nationalistic sentiments in its people against other nations or groups of people would betray their mission," the pope said May 2.

Pope Francis gave a lengthy speech to members of the Pontifical Academy of Social Sciences, who were holding a plenary meeting May 1-3 at the Vatican on the nature and role of the nation-state, the development of international cooperation and today's resurgence of nationalism.

The Catholic Church, the pope said, has always promoted love and respect for one's nation and cultures while also warning against turning such affection into the hatred and exclusion of others — a "confrontational nationalism that puts up walls, indeed, even racism and anti-Semitism."

"The church notes with concern the reemergence, a bit everywhere in the world, of aggressive currents against foreigners, especially immigrants, as well as that growing nationalism that overlooks the common good," he said.

The state is meant to be at the service of people, families, the common good and peace, he said. "However, too often states become subservient to the interests of a dominant group, mostly for economic profit, who oppress — among other things — ethnic, linguistic or religious minorities who are on their territory."

In fact, he said, one can gauge a nation's understanding of human dignity and humanity by the way it treats migrants, he said.

"Every human person is a member of humanity and has the same dignity," he said, so whenever people are forced to flee their homeland, they must be humanely welcomed, protected, promoted and integrated.

"Migrants are not a threat to the culture, traditions and values of the nation that welcomes them," the pope said.

While migrants must integrate in their host nation, he said, that "doesn't mean assimilate," but rather share in the life of their new homeland while still being able to "be themselves as people" and enrich their new community.

The government must protect migrants and manage migration flows "with the virtue of prudence" as well as help local communities be more informed and encouraged to be part of the process of integration, the pope said.

When globalization seeks to eliminate differences and smother local identities, he said, it is more likely "that nationalism and hegemonic imperialism reemerge."

The pope also called for greater efforts to help nations overcome their divisions and work together to solve pressing global problems like climate change, human trafficking and nuclear disarmament.

"If offensive and defensive nuclear weapons are installed, not just on earth, but now also in space," he said, "the so-called new technological frontier will have increased and not decreased the danger of a nuclear holocaust."

No one nation can provide the common good for its people all by itself, he said. "The common good has become global and nations must come together for their own benefit."