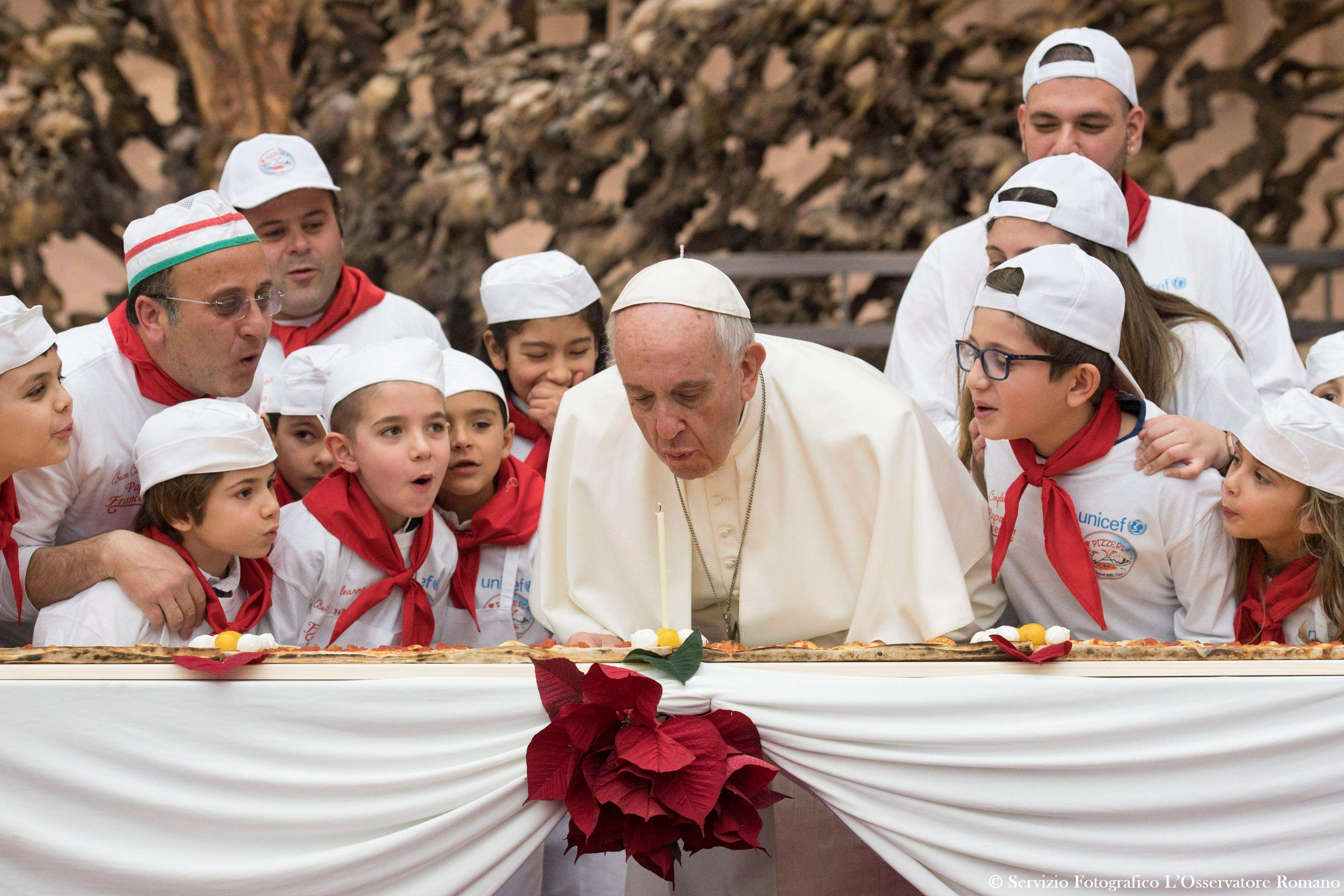 Pope Francis blows out a candle on a 13-foot-long pizza during a special meeting to celebrate his 81st birthday Dec. 17 at the Vatican's Paul VI hall. (CNS/L'Osservatore Romano)

Celebrating his 81st birthday, Pope Francis blew out the candles on a 13-foot long pizza after being serenaded with song and dance by children and employees from a Vatican pediatric clinic.

A group of children receiving assistance from the Vatican's St. Martha Dispensary, a maternal and pediatric clinic, had given the pope a birthday party Dec. 17 marked with singing, dancing and a cake adorned with gold and white fondant decorations.

They also rolled out a large pizza with a single lit candle on it. The pope was joined with several children from the clinic and counted down before blowing out the candle.

"Eat the 4-meter pizza: Eat well, it will do you good and make you grow," the pope told the children.

The pope said their joy was a gift and is like "good earth that makes life grow with good fruits."

"Do not make children sad. When children see that there are problems at home, that their parents are fighting, they suffer," he said. "They must always grow with joy."

After meeting the children, Francis greeted an estimated 25,000 pilgrims in St. Peter's Square for his Sunday Angelus address.

After reciting the Angelus prayer, the pope was about to greet several individual groups present in the square before the crowd burst into song, singing "Happy Birthday."

Touched by the gesture, the pope said: "Thank you. Thank you very much."

Francis also blessed the statues of baby Jesus that will be at the center of Nativity scenes in Rome schools, churches and homes.

Addressing the children who brought their figurines to the square, the pope said, "When you pray at home, in front of the creche with your family, let yourselves be drawn toward the tenderness of the child Jesus, who was born poor and fragile in our midst to give us his love. This is the true Christmas."

With Christmas also around the corner, the pope also met with members of the Italian branch of Catholic Action's children's section, parish-based groups of young people, ages 4-14, for his traditional pre-Christmas audience with them.

The pope said the Christmas season is a reminder of helping those in need who are the "image of the child Jesus who was turned away and who did not find a place to stay in the city of Bethlehem."

He called on them to ask themselves how they can better serve the suffering Christ in those who are cast aside by society.

"Here are your 'peripheries;' try to fix your goal on companions and people that no one sees, and dare to make the first step to meet them, to give them a bit of your time, a smile, a gesture of tenderness," the pope said.

"In this upcoming feast of holy Christmas, you are called to always make him known more and more among your friends, in the cities, in the parishes and in your families," he said.