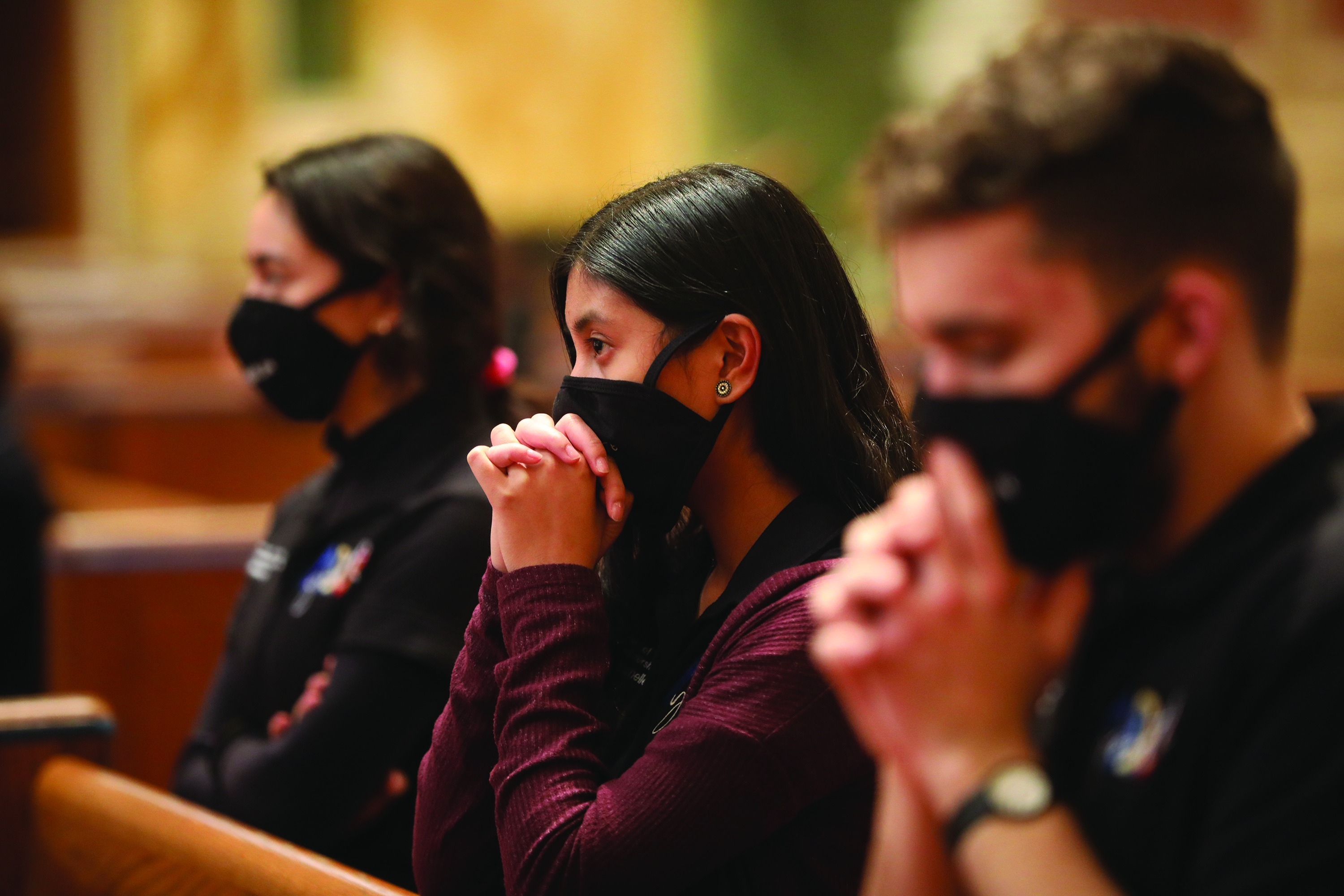 Members of the Archdiocese of Washington Youth Leadership Team pray during a Jan. 29, 2021, Mass for Life at the Cathedral of St. Matthew the Apostle in Washington. (CNS/Catholic Standard/Andrew Biraj)

Faith is a gift that is never imposed on anyone but must be accepted with an open heart, Pope Francis wrote to young people.

"If you think about it, it is very beautiful and very respectful of our freedom," the pope wrote to young people in the preface to a new book. Faith "is a gift that must be desired."

"Maybe you have sought the Lord and have not found him, but let me ask you something: How strong was your desire?" the pope wrote. "Seek him with all the passion of your heart, pray, ask, invoke, cry out and he will let himself be found as he promised."

Taking the form of a letter to "my young friend who is searching," Pope Francis' preface introduces a book in Italian by Cardinal Raniero Cantalamessa about St. Francis of Assisi as described by Br. Pacificus, a famed poet who became one of the first men to join St. Francis after meeting him early in the 13th century.

When Br. Pacificus, then known as William of Lisciano, met St. Francis, "he saw the splendor of his holiness and through him saw the beauty of God's face," Pope Francis wrote. "That which he always sought, he finally found and found thanks to a holy man."

"Those are strong words," the pope wrote. "But we can ask, 'Should we take them seriously? If I ask the Lord, does he really listen to my request? If I seek him, will I find him? If I knock, will he open the door?"

Those are understandable and important questions, the pope said, especially when one looks around and sees how many people "knock on the doors of heaven and hear nothing but silence from the other side."

A line from the Book of Jeremiah may hold the key, he continued. It says, "When you look for me, you will find me. Yes, when you seek me with all your heart, I will let you find me."

"God does let himself be found, yes, but only by those who seek him with all their hearts," the pope wrote. "Open the Gospels; read about Jesus' encounters with the people who went to him and you will see" that he fulfilled the desires of those like the insistent widow or the repentant sinner or the leper in need of healing — all of whom sought Jesus out with a single-minded drive.

"The one who seeks finds if he or she seeks wholeheartedly, if for him or her the Lord is as vital as water in the desert, as soil for a seed or sun for a flower," Pope Francis wrote.

God has never quit waiting for people to open their hearts to him, the pope said.

"And, maybe, he is making his voice heard more today than yesterday," he wrote. "If you just lower the volume on other sounds and raise the volume of your deepest desires, you will hear him loud and clear within yourself and around you."

God also continues to call people to devote their lives to him, the pope said. "If you would have the courage to leave your securities and open yourself to him, he will open to you a new world and you, in turn, will become a light to others."