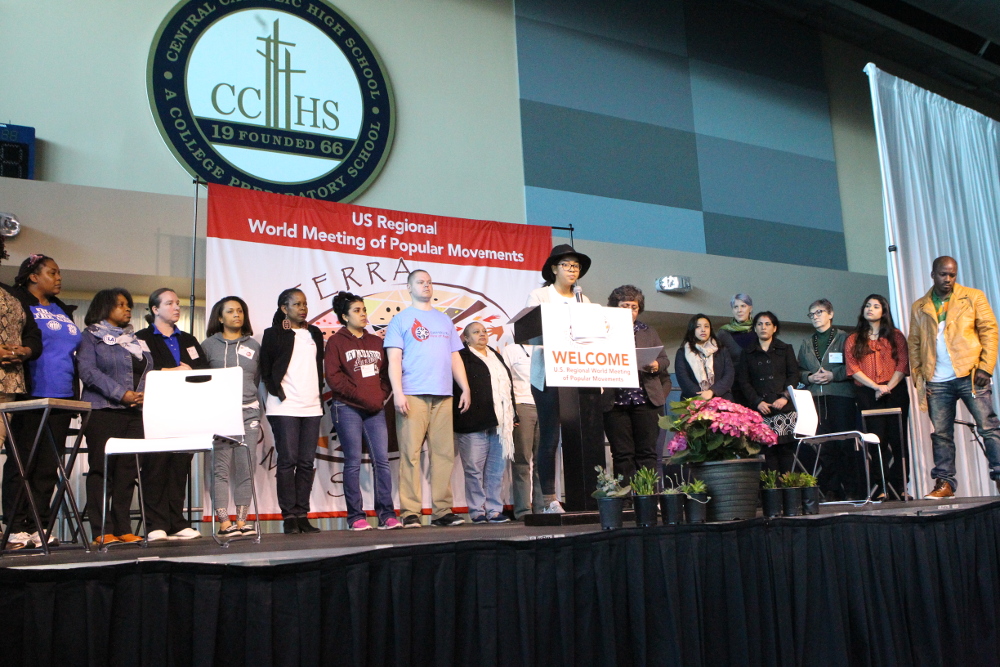 Representatives of community groups give the final message from the U.S. Regional World Meeting of Popular Movements Feb. 19, 2017, in Modesto, California. (CNS/Dennis Sadowski)

Popular movements can spark the change needed to ensure a future that is no longer in the hands of elites and powerful people, but includes the poor who have the inalienable right to a life of dignity, Pope Francis said.

Grassroots organizations representing the poor, the underemployed, indigenous communities and farmworkers are "a sprout that, like a mustard seed, will bear much fruit: the springboard of a great social transformation," the pope wrote in the preface of a book that will be published in September by LEV, the Vatican publishing house.

"Popular movements, and this is the first thing I would like to highlight, represent in my opinion a great social alternative, a profound cry, a sign of contradiction, a hope that everything can change," he said.

According to Vatican News, the new book, titled, The Emergence of Popular Movements: Rerum Novarum of Our Time, was prepared by the Pontifical Commission for Latin America and will be published in Spanish. Rerum Novarum was Pope Leo XIII's 1891 encyclical on worker's rights and is considered the foundational document for the church's social teaching.

The new book explores a series of World Meetings of Popular Movements held since 2014 and supported by Francis, Vatican News reported.

The Vatican's news website and the Italian blog Il Sismografo published several excerpts of the book, while the Spanish-language online site Religion Digital released the full text of the preface Aug. 19.

In it, the pope praised the work of the movements, through which the poor "have not resigned themselves to suffering injustice and plundering," but have chosen, "like Jesus, docile and humble of heart, to rebel peacefully with 'bare hands' against it."

The poor, he added, "are not only the preferred recipients of the church's action, the privileged ones of her mission, but they are also active participants. That is why I wanted to express my genuine solidarity, in the name of the church, with this galaxy of people and associations who yearn for the happiness of 'living well' and not of that selfish idea of 'the good life.'"

Those who are marginalized and cast aside, he said, are victims of the "globalization of indifference," which has "generated a 'new idol': that of fear and security" that has ushered in an "age of fury."

"The fear today is a fear of manipulation of civilizations, the creating agent of xenophobia and racism," he wrote. "It is a terror that is sown in the peripheries of the world, with looting, oppression and injustice, which exploits as we have seen in our recent past as well as in the centers of the Western world."

Francis said that the participation of popular movements in politics can help to overcome "the politics of the false prophets who exploit fear and desperation and who preach a selfish well-being and a false security."

He also expressed his hope that the book would help strengthen the efforts of the grassroots organizations to bring about a "new humanism" to overcome a lack of compassion and "the progressive eclipse of culture and of the notion of the common good."

"The antidote to populism and political showmanship lies in the efforts of organized citizens, particularly those who create in their daily lives — as is the case with so many experiences present in the movements — fragments of other possible worlds that fight to survive the darkness of exclusion," the pope said.