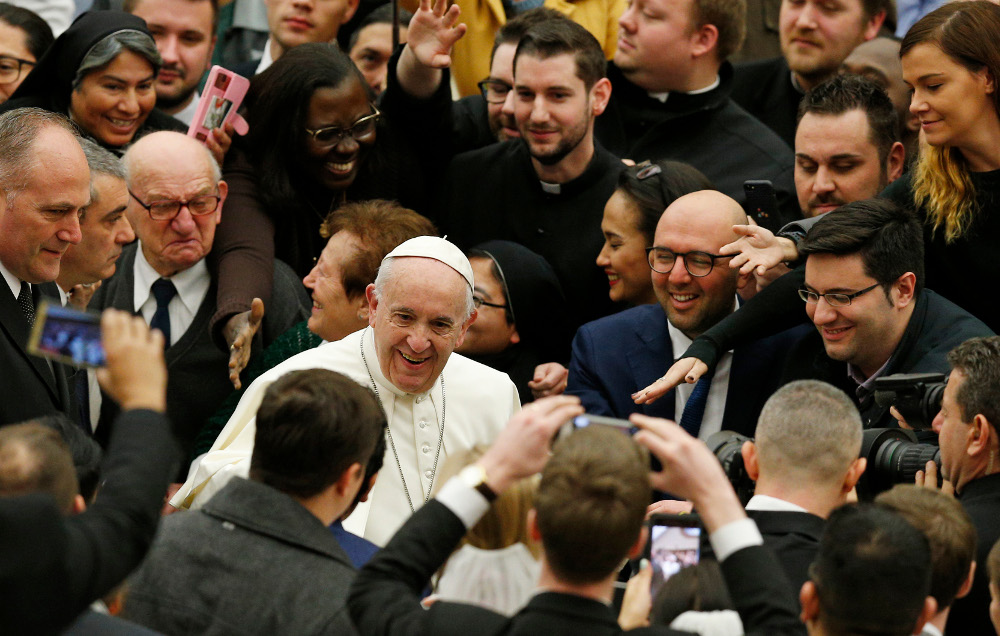 Pope Francis greets the crowd during his general audience in Paul VI hall at the Vatican Jan. 9. (CNS/Paul Haring)

God is a father who never ignores his children when they call to him in times of suffering, loneliness and despair, Pope Francis said.

Although at times it seems that "so many of our prayers seem to have no result," Christians are called by Christ to "insist and not give up," the pope said Jan. 9 during his weekly general audience.

Arriving at the Paul VI audience hall, the pope greeted thousands of cheerful pilgrims, shaking hands, embracing children and even taking a sip of mate tea offered to him by a pilgrim.

Continuing his series of talks on the Lord's Prayer, the pope reflected on the disciples asking Jesus to teach them how to pray.

In teaching them to pray the "Our Father," he said, Jesus "explains to his followers in what words and with what feelings they must turn to God."

"Father — that is such a beautiful word to say," the pope said. "We can pray just with that word, 'father,' and feel that we have a father; not a master but a father."

At important moments in his own life, Francis explained, Jesus is "in an atmosphere of prayer" and guided by the Holy Spirit in his actions. He also prays for others, including "for Peter who will soon deny him."

"This consoles us, knowing that Jesus prays for us, he prays for me, he prays for each one of us so that our faith does not fail." the pope said. "We can also say to Jesus: 'You are praying for me; continue to pray because I need it.' (Pray) like that, with courage."

Even in his final moments, the pope added, Jesus is immersed in prayer, for example when consoling the women along the way of the cross, when promising the joys of paradise to the good thief and before taking his last breath.

"Jesus' prayer seems to dampen the most violent emotions, the desires for revenge and retaliation, he reconciles man with his most bitter enemy: death," he said.

When life seems incomprehensible, Francis said, prayer "is ultimately the victory over loneliness and despair" because God is always present.