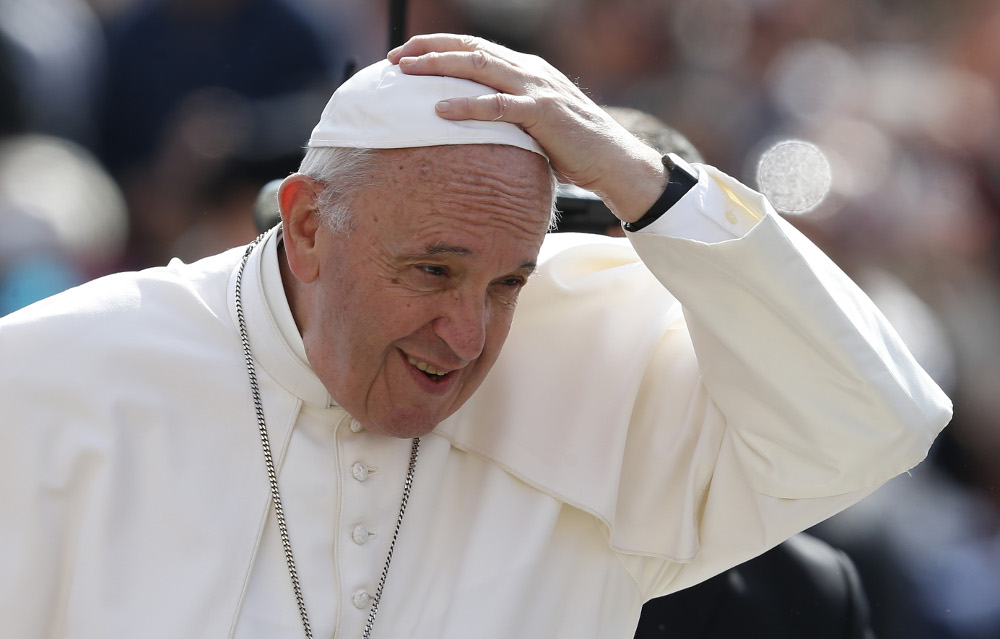 Pope Francis is pictured while greeting the crowd during his general audience in St. Peter's Square at the Vatican May 22, 2019. (CNS/Paul Haring)

The Holy Spirit gives Christians the courage and the strength needed to engage in a loving dialogue with God that is like the dialogue of a child with his or her father, Pope Francis said.

"Do not forget this: The protagonist of all Christian prayer is the Holy Spirit. We can never pray without the strength of the Holy Spirit; it is he who moves us to pray well," the pope said May 22 during his weekly general audience.

Greeting an estimated 20,000 pilgrims as he toured St. Peter's Square in the popemobile, Pope Francis occasionally stopped to kiss children's foreheads and drink mate tea offered to him.

Alessandro Gisotti, interim Vatican spokesman, said in a tweet published after the audience that the pope also greeted Denis Mukwege, a Congolese gynecologist who was awarded the Nobel Peace Prize in 2018 for his efforts to end the use of sexual violence against women in war and armed conflict.

In his main audience talk, the pope concluded his series of talks on the Lord's Prayer, meditating on the theme, "Wherever you are, invoke the Father."

Christian prayer, he said, "is born from the audacity of calling God by the name 'Father.' "

"This is the root of Christian prayer: to call God 'Father.' But this requires courage. It is not so much a formula as it is a filial intimacy into which we are introduced by grace," he said. "Jesus is the one who reveals the Father and gives us familiarity with him."

The "filial trust" that Jesus' exhibited toward God, especially in times of trial, is a call for Christians to embrace a "spirit of prayer" that "must be insistent and, above all, it must bear the memory of our brothers and sisters, especially when we have difficult relationships with them."

Recalling Christ's prayer of "My God, my God, why have you forsaken me?" as he was crucified on the cross, the pope said that even in that moment of abandonment, Jesus still remembered his heavenly Father.

"In that 'my God,' one can find the nucleus of the relationship with the Father, there the nucleus of faith and prayer can be found," Pope Francis said.

For this reason, he added, "a Christian can pray in every situation" for themselves and for others.

"Let us never cease to tell the Father about our brothers and sisters in humanity, so that none of them, especially the poor, may remain without a consolation and a portion of love," the pope said.