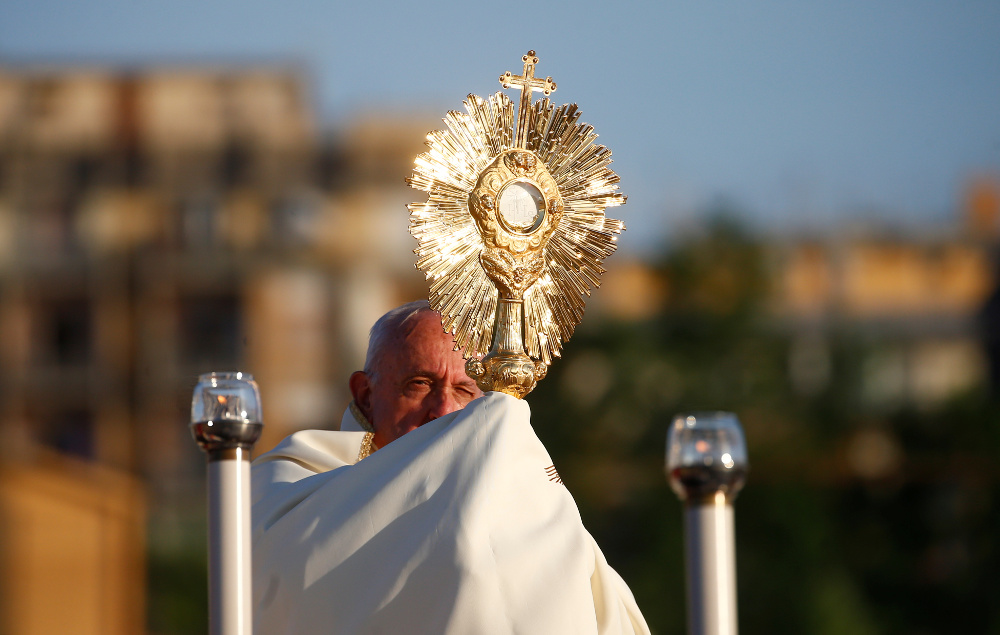 Pope Francis leads Benediction as he marks the feast of Corpus Christi at the end of the Corpus Christi procession through the Casal Bertone neighborhood in Rome June 23, 2019. (CNS/Yara Nardi, Reuters)

Every time a Catholic receives Communion, it should be like his or her first Communion, Pope Francis said.

Marking the feast of the Body and Blood of Christ June 23, the pope spoke about the gift of the Eucharist during his midday Angelus address at the Vatican and at the Rome parish of Santa Maria Consolatrice, where he celebrated an evening Mass and led eucharistic Benediction after a Corpus Christi procession.

The feast, he told visitors in St. Peter's Square, is an annual occasion for Catholics "to renew our awe and joy for the stupendous gift of the Lord, which is the Eucharist."

Catholics should concentrate on receiving Communion with gratitude every time they receive it, he said, rather than approaching the altar "in a passive, mechanical way."

"We must get used to receiving the Eucharist and not go to Communion out of habit," the pope said. "When the priest says to us, 'The body of Christ,' we say, 'Amen.' But let it be an 'Amen' that comes from the heart, with conviction."

"It is Jesus, it is Jesus who saved me; it is Jesus who comes to give me the strength to live," Pope Francis said. "We must not get used to it. Every time must be as if it were our first Communion."

Later, celebrating an evening Mass on the steps of the Rome parish of Santa Maria Consolatrice, about six miles east of the Vatican, Pope Francis' homily focused on the Gospel story of the multiplication of the loaves and the connection between the Eucharist and blessings.

"When one blesses, he does not do something for himself, but for others," like Jesus did when he blessed the five loaves and two fish before they were miraculously multiplied to feed the crowd, the pope said. "Blessing is not about saying nice words or trite phrases; it is about speaking goodness, speaking with love."

The Mass is "a school of blessing," the pope said. The people gathered for the Eucharist are blessed, they bless the Lord, and they, in turn, are sent forth to be a blessing to the world.

"It is sad to think of how easily people today speak words not of blessing but of contempt and insult," the pope said. "Sadly, those who shout most and loudest, those angriest, often appeal to others and persuade them.

"Let us avoid being infected by that arrogance," he said. "Let us not let ourselves be overcome by bitterness, for we eat the bread that contains all sweetness within it."

The miracle of the multiplication of the loaves also is a lesson in giving, a lesson Jesus taught in a supreme way by giving up his life and giving himself in the Eucharist, the pope said.

Taking the small basket of food offered by a boy and feeding a multitude with it shows that "whatever we have can bear fruit if we give it away — that is what Jesus wants to tell us — and it does not matter whether it is great or small."

"Being simple and essential, bread broken and shared, the Eucharist we receive allows us to see things as God does," the pope said. "It inspires us to give ourselves to others. It is the antidote to the mindset that says, 'Sorry, that is not my problem,' or, 'I have no time, I can't help you, it's none of my business.' "