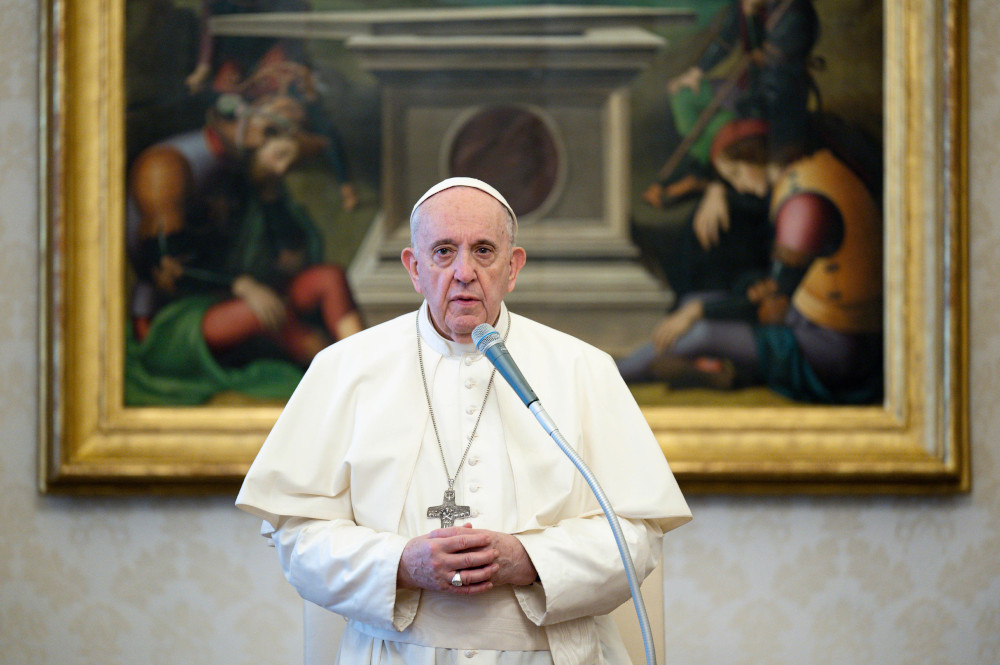 Pope Francis leads his general audience in the library of the Apostolic Palace at the Vatican Nov. 4, 2020. The weekly papal audience returned to being closed to the public as COVID-19 cases increase in Italy. (CNS/Vatican Media)

Prayer has the power to take all those things in life that seem like a condemnation and turn them into something good, Pope Francis said.

"The trials of life thus change into opportunities to grow in faith and charity," the pope said Nov. 4 during his weekly general audience, which was livestreamed from the library of the Apostolic Palace.

The general audience had been taking place with the public present since Sept. 2 — starting in an outdoor courtyard and later in the Vatican's Paul VI hall. But after someone attending the general audience Oct. 21 tested positive for COVID-19, the Vatican announced that beginning Nov. 4, the audiences would return to being livestreamed without the presence of pilgrims and visitors to prevent "any possible future risks to the health of the participants."

The pope began the Nov. 4 audience expressing his disappointment, but underlined it was important to respect mandates aimed at keeping people from contracting COVID-19.

"We must be very attentive to regulations by authorities, both political authorities and health care experts, to protect ourselves in this pandemic," he said in remarks off-the-cuff.

Continuing his series of audience talks about prayer, Francis reflected on how Jesus always took time out to pray and be in dialogue with God, despite busy days helping the poor and the sick.

Jesus was not guided or inspired by success, consensus or "the seductive phrase, 'Everyone is searching for you,'" the pope said.

"Prayer is the rudder that guides Jesus' course," he said; it does not lead him to the easiest path, but to the one that stays true to God's will, which he discovers in prayer.

A day lived without prayer risks turning into a day that is lived as "bothersome or tedious," a day when whatever happens is poorly endured and comes from "blind fate," the pope said.

"Prayer is first of all listening to and encountering God," he said. It helps people face reality, but in a way that they can see problems not as obstacles, but as opportunities to grow in faith and charity.

Without cultivating self-reflection, he said, "we become superficial, agitated and anxious."

Jesus showed that prayer is ultimately letting go and putting oneself in God's hands.

At the end of the audience, the pope prayed for "the defenseless victims of terrorism, whose intensifying cruelty is spreading in Europe."

An attack in Nice, France, Oct. 30, and one in Vienna, Nov. 2, "have provoked dismay and reproach" among residents and in all who "cherish peace and dialogue."

The pope also blessed people taking part in a prayer initiative underway in Poland after protests erupted against a near-total ban on abortions.

He asked that prayers lead to "the healing of the harm caused by the loss of unborn children, the forgiveness of sins, the gift of reconciliation and opens up in your hearts hope and peace," he said.