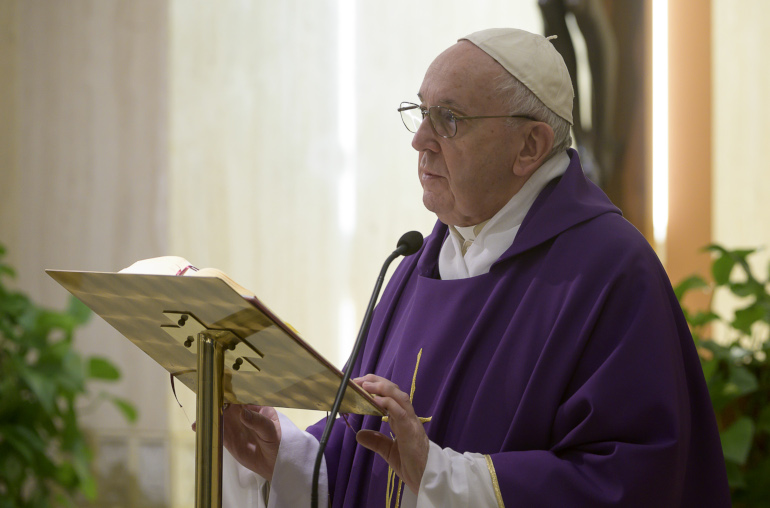 Pope Francis says he hopes the global Covid-19 pandemic will help the Catholic Church better know how to be both an institution, with certain rules and regulations, and more free-form, able to respond to people's pastoral needs in creative ways.

In a prepared interview with British author Austen Ivereigh, released April 8, the pontiff gives the example of an Italian bishop that called asking for advice about whether it was allowable to offer general absolution to Covid-19 patients in isolation in a hospital.

The prelate, the pope recounts, had been told by a canon lawyer that he could not do so, as absolution is generally given during confession, which requires face-to-face contact.

"I told him: 'Bishop, fulfill your priestly duty,'" Francis states.

"I found out later that he was giving absolution all around the place," the pope says. "This is the freedom of the Spirit in the midst of a crisis, not a church closed off in institutions."

"That doesn’t mean that canon law is not important: it is, it helps, and please let’s make good use of it, it is for our good," he continues. "But the final canon says that the whole of canon law is for the salvation of souls, and that’s what opens the door for us to go out in times of difficulty to bring the consolation of God."

Ivereigh, who has written two biographies of Francis, published his interview with Commonweal, the UK's Tablet, Spain's ABC magazine, and Italy's La Civiltà Cattolica. In a brief introduction to the exchange, the author says he provided Francis with a series of written questions, and that the pontiff responded with recorded answers.

Most of the material deals with how Francis is living through the global pandemic. The pontiff says he has praying more than usual, "because I feel I should." He says he is also thinking a lot about the coming post-pandemic period.

"What will be my service as Bishop of Rome, as head of the church, in the aftermath?" the pope asks. "That aftermath has already begun to be revealed as tragic and painful, which is why we must be thinking about it now."

Francis speaks about the need for the church to be both an institution and more free-form in response to a question about what kind of faith community he sees emerging in how Catholics are responding to the pandemic.

The pontiff evokes what he calls "a tension between disorder and harmony."

"The temptation is to dream of a deinstitutionalized church, a gnostic church without institutions, or one that is subject to fixed institutions, which would be a Pelagian church," says the pope.

"We have to learn to live in a church that exists in the tension between harmony and disorder provoked by the Holy Spirit," he says.

"If you ask me which book of theology can best help you understand this, it would be the Acts of the Apostles," the pope continues. "There you will see how the Holy Spirit deinstitutionalizes what is no longer of use, and institutionalizes the future of the church. That is the church that needs to come out of the crisis."