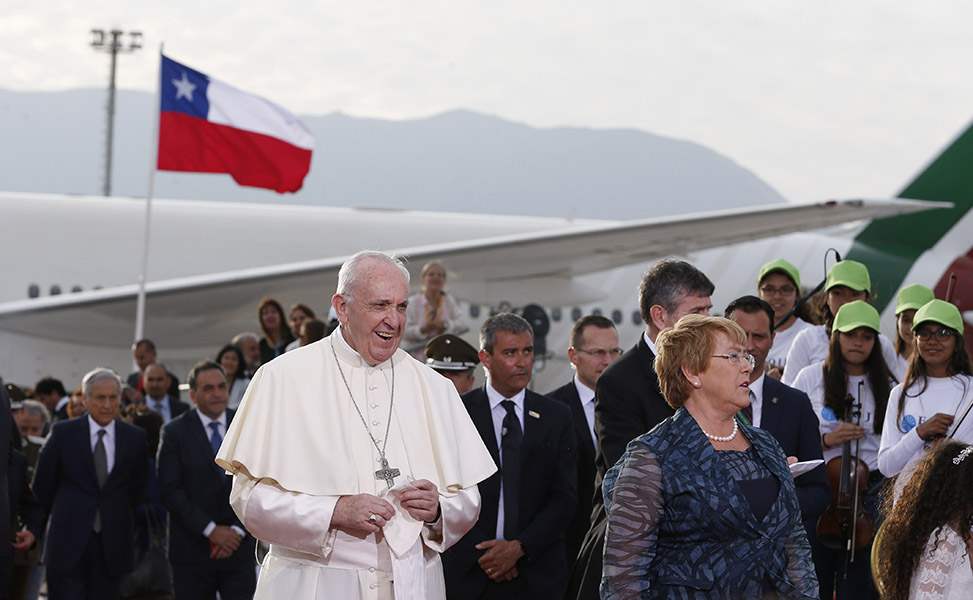 Pope Francis has begun a three-day visit to Chile, where he is expected to focus on helping the local Catholic community regain trust after a recent spate of clergy sexual abuse scandals.

While the pontiff was greeted by smiling children offering flowers and a youth band in green caps upon landing here from Rome late in the evening after a nearly 16-hour flight, the rest of his Jan. 15-18 visit may not be so welcoming.

Francis is under criticism for his 2015 appointment of Osorno Bishop Juan Barros Madrid, who is accused of covering up for notorious abuser Fr. Fernando Karadima in the 1980s and '90s.

Days before the pope's arrival, three Catholic churches were firebombed and a note left at one scene threatened: "The next bombs will be in your cassock." Local Catholics have also planned daily protests against the pontiff during his visit over the Barros appointment.

But crowds enthusiastically welcomed Francis to Santiago Jan. 15, lining the city's streets as the pope arrived at the city's apostolic nunciature in an open-air pope-mobile. Hundreds of people crowded outside the building, stretching their arms out as the pontiff walked by, offering prayer items, food, and white zucchetti hats to exchange.

The pontiff will open his trip by meeting with President Michelle Bachelet and the country's other political leaders in the morning of Jan. 16. Later that day he will hold an open-air Mass at Santiago's O'Higgins Park before meeting in the afternoon with the country's bishops at the city's cathedral.

On subsequent days Francis will visit Temuco, about 415 miles south of Santiago, and Iquique, about 1,000 miles north, before heading to Peru on Jan. 18.

Francis did not say much about his visit during a brief meeting with journalists aboard the transatlantic papal flight, the longest yet of his papacy. He only mentioned that he thought the trip would be "very busy."

Prior to takeoff, Vatican staff distributed to journalists a small card at the pope's request. On one side, the card shows a photo of a young Japanese survivor of the U.S. atomic bombing of Nagasaki carrying his dead brother, killed in the blast, to a crematorium. On the other, it states simply: "the fruit of war."

In his short remarks, Francis said he thought to have the card printed and distributed "because an image of this type can say more than a thousand words."

As he usually does on foreign trips, the pope then spent time greeting the journalists on the plane one-by-one. One journalist asked the pope if the card he had handed out was an indication that he is fearful of the possibility of nuclear war.

"I really am afraid," the pontiff replied. "One accident is enough to precipitate things."