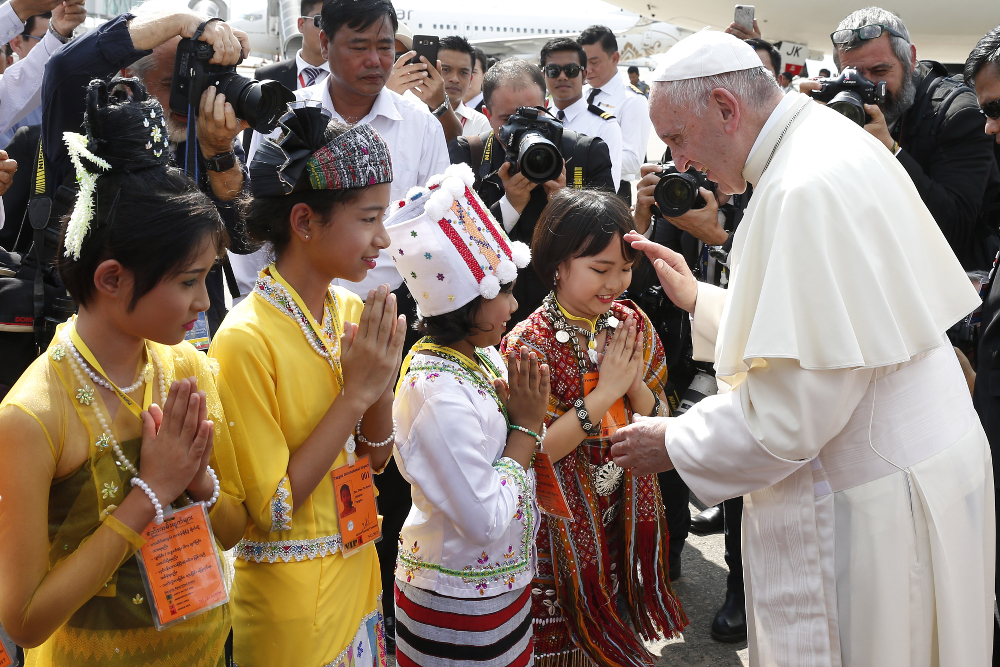 Pope Francis has become the first pontiff to travel to Myanmar, landing here Nov. 27 for a three-day visit as the majority Buddhist nation is facing international outcry over its persecution of a minority Rohingya Muslim population.

Almost immediately upon arrival, the pope made a change to his schedule for his visit here, moving ahead a meeting with Myanmar's top military leader by three days and making the encounter his first official appointment in the country.

Francis met with Senior General Min Aung Hlaing during the evening of Nov. 27, in what Vatican spokesman Greg Burke called a 15-minute courtesy visit in which the pope and the general "spoke of the great responsibility of the country's authorities in this moment of transition."

Francis is visiting Myanmar Nov. 27-30 before heading to neighboring Bangladesh, where the U.N. says some 537,000 Rohingya have fled from violence in Myanmar's western state of Rakhine.

The Myanmar military says it launched operations against the Rohingya earlier in the year following insurgent attacks in Rakhine. The top U.N. human rights official, Zeid Ra’ad Al Hussein, said in September that the military operations were "clearly disproportionate" to the original insurgent attacks and had resulted in "a textbook example of ethnic cleansing."

While Myanmar began a process of democratic reforms in 2015 after a half-century of military rule, the armed forces still have substantial power in the nation, including control of 25 percent of the seats in Parliament.

The meeting between the pope and the general took place at the archbishop’s residence in Yangon, where Francis is staying. Four other military officers also took part, and a representative from the Catholic Church in Myanmar provided translation.

Francis had originally been scheduled to meet with Hlaing on Nov. 30, following meetings with de facto Prime Minister Aung San Suu Kyi and other political leaders.

When the pope arrived in Yangon earlier Nov. 27, a small delegation of about a dozen schoolchildren dressed in traditional clothes and most of the country's 22 bishops met him on the tarmac at the airport after his 10-hour overnight flight from Rome.

Hundreds of other schoolchildren, dressed in white t-shirts, waving yellow flags and chanting "Viva il Papa," lined the streets outside the airport as Francis headed into central Yangon in an older model blue Toyota sedan.

The pontiff begins his six-day, two country foreign voyage with a delicate diplomatic mission ahead.

Human rights advocates want the pontiff to confront Suu Kyi, a Nobel Peace Prize laureate, over her country's treatment of the Rohingya. But local church leaders have advised him to refrain while in the country from specifically mentioning the Rohingya by name, for fear of reprisals from Myanmar's military.

Francis did not say much about his visit during a brief meeting with journalists aboard the papal flight from Rome, which left late in the evening of Nov. 26. But he told Italian President Sergio Mattarella in a traditional telegram upon leaving Italy that he was headed to Myanmar to "encourage the small but fervent Catholic community and meet believers of diverse religions." 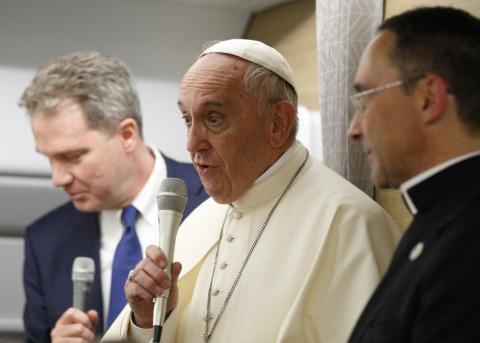 Pope Francis greets members of the media aboard his flight from Rome to Yangon, Myanmar, Nov. 26. (CNS photo/Paul Haring)

Francis is staying in Yangon each night in Myanmar, but will travel about 200 miles north Nov. 28 to the capital of Naypyidaw, where he will meet Suu Kyi and President Htin Kyaw, an ally of the Nobel laureate.

After separate private encounters with Suu Kyi and Kyaw, Francis is scheduled to address them and Myanmar's other political leaders publicly. His address is expected to draw attention either with a reference to the Rohingya or with the absence of such a reference.

On the days following the visit to Myanmar's capital, Francis is to celebrate a Mass for the country's small Catholic community, meet with the country's bishops, and speak to the state-controlled supreme council of Myanmar's Sangha Buddhists.

Myanmar is estimated to be about 90 percent Buddhist. According to the Vatican's 2015 statistics, the latest available, the country has about 659,000 Catholics out of a population of some 52 million.

The Vatican announced Francis' visit to Myanmar and Bangladesh Aug. 28, before full details of Myanmar military's operation against the Rohingya were known. The trip was initially seen as a way for Francis -- who had the Vatican establish full diplomatic relations with Myanmar for the first time in May after a visit to Rome by Suu Kyi -- to support the country's transition to democracy.

The pope has spoken specifically about Myanmar's treatment of the Rohingya in the past. In remarks following his weekly Sunday Angelus prayer in St. Peter's Square Aug. 27, for example, he said he had learned of the "persecution" of "our Rohingya brothers and sisters" and asked for prayer that they would be "given their full rights."

Francis is to travel Nov. 30 to Bangladesh, before returning to Rome Dec. 2.