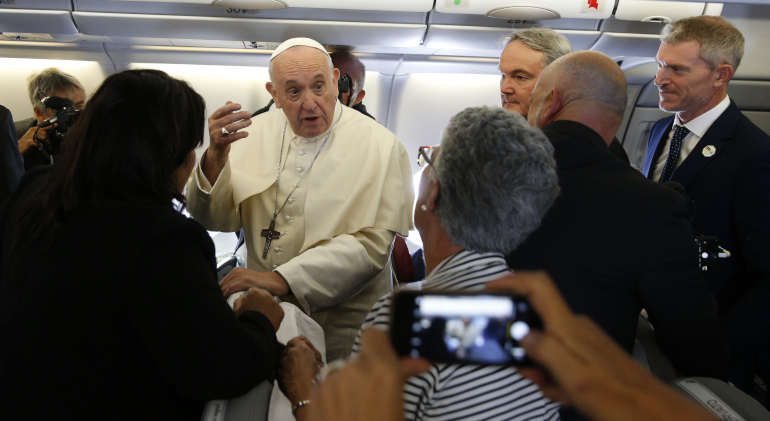 Pope Francis will visit Iraq in March 2021, the Vatican said in an unexpected Dec. 7 announcement, restarting papal travel abroad after an unprecedented year-long suspension in 2020 due to the coronavirus pandemic.

The Vatican's announcement did not give many details, but said the pontiff is planning to visit the country from March 5-8 and to travel to the cities of Baghdad, Erbil, Mosul, Qaraqosh (Bakhdida), and the Ur plain. The planned trip, said the city-state, "will take into consideration the evolution of the worldwide health emergency."

Francis will be the first Catholic pontiff to visit Iraq, which has one of the oldest continuing Christian communities in the world. Pope John Paul II had planned to make a trip in 1999 but was ultimately unable to go.

Like each of his predecessors since Pope Paul VI, Francis has stressed the importance of traveling abroad to visit Catholic communities around the world and to pursue the Vatican's diplomatic goals. Francis has made 32 such visits.

But the pontiff's plans for 2020, which was meant to include a trip to Iraq, were shelved as the coronavirus pandemic unfolded. The year, also intended to see a first-of-its-kind joint trip to South Sudan with Anglican Archbishop of Canterbury Justin Welby, has become the first since 1979 without a papal trip outside Italy.

The plans to visit Iraq had appeared well underway at the beginning of the year. Iraqi President Barham Salih met with Francis at the Vatican on Jan. 25, before the full scope of the coming pandemic was made clear.

The Vatican statement announcing the 2021 visit said Francis would be traveling at the invitation of Salih and the Iraqi Catholic community. Vatican News, an official state outlet, reports that the pope wants to make the trip as "a concrete gesture of closeness" to the people of the country, which it calls "martyred."

The Vatican News report also points to effect that the U.S.-led 2003 invasion of Iraq and the later rise of the so-called Islamic State (ISIS) has had on the country's Christian population. It cites figures that the population numbered between 1 million to 1.4 million before the invasion and now numbers between 300,000 and 400,000.

Marie Dennis, the former long-time president of Pax Christi International, told NCR the trip is "a beautiful example of active nonviolence, a visible sign of stepping into violence in order to diminish its power and highlight the possibility of just peace."

Judy Coode, coordinator of Pax Christi's Catholic Nonviolence Initiative, highlighted the effect of the coronavirus pandemic on Iraqis. She said the country's healthcare system had been "decimated and overwhelmed" after years of war.

"Pope Francis' decision to visit Iraq calls our attention back to one of the most vulnerable communities on earth, a population terribly affected by Covid," said Coode. "He's reminding us that the people of Iraq continue to struggle with a violent destabilization created by outside actors, including the United States."

Francis' choice of cities to visit in Iraq appears to highlight both the country's historic Christian ties and wider humanitarian issues.

The historic city of Ur, in the country's south near the Persian Gulf, is said to be the birthplace of Abraham. Mosul, in the country's north near borders with Syria and Turkey, was under ISIS control from 2014 to 2017. Amnesty International says the Iraqi government's battle to retake the city displaced some 600,000 civilians and killed nearly 6,000.

Francis has dedicated many of his trips abroad since his 2013 election as pontiff to visiting former warzones.

In 2015, the pontiff visited the Central African Republic as the nation was under interim rule during a break in an ongoing series of civil wars. That visit featured a heavy security presence, including white U.N. tanks and pick-up trucks with mounted heavy guns lining the papal route.