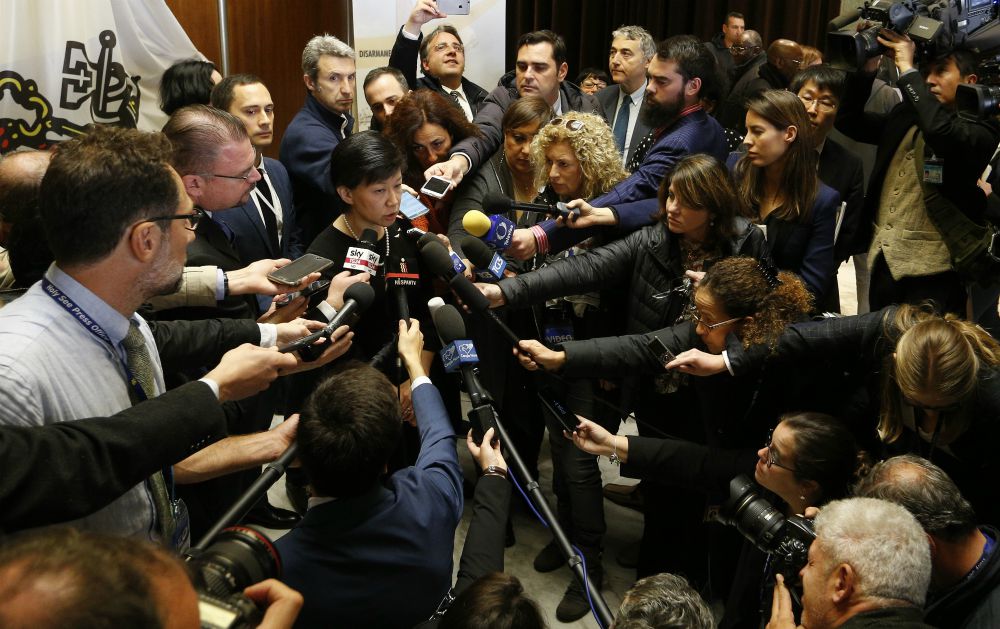 Izumi Nakamitsu, U.N. high representative for disarmament affairs, answers questions from journalists during a conference on building a world free of nuclear weapons, at the Vatican Nov. 10. (CNS/Paul Haring)

One of the drafters of a landmark pastoral letter from the U.S. bishops that in 1983 offered a "strictly conditioned moral acceptance" of nuclear deterrence says it's time to reevaluate that document in light of Pope Francis' Nov. 10 statement that the "very possession" of nuclear weapons is to be "firmly condemned."

Retired Detroit Auxiliary Bishop Thomas Gumbleton, who served on the committee led by the late Chicago Cardinal Joseph Bernardin that wrote The Challenge of Peace: God's Promise and Our Response, said the pope is "depending on people to follow up and to say, 'That means we have to start to disarm.' "

"The pope has said something that ... has put it back in the court of the local bishops' conferences," Gumbleton said in a Nov. 16 interview with NCR. "And the United States obviously, since we have the largest capability of nuclear destruction, we should be in the front row of those trying to change things."

"I feel certain, based on [the pope's] conviction that possession is wrong, he would want something like this spelled out: why it's wrong, what you must do to change it," Gumbleton said.

Gumbleton is among a number of Catholic disarmament advocates who see Francis' Nov. 10 statement, given as part of a talk to participants in a high-profile Vatican conference on nuclear weapons issues, as a development away from the church's prior acceptance of deterrence as a strategy.

Marie Dennis, the co-president of Catholic peace group Pax Christi International, wrote in an article for NCR on Nov. 21 that the pope's words "definitively brought the Catholic Church into full agreement" with a July U.N. treaty signed by 122 countries that calls for the complete elimination of nuclear weapons.

Stephen Colecchi, director of the U.S. bishops' office of international justice and peace, said in an interview that Francis' statement has "tremendous implications" for nuclear policy. He called the pope's words part of a "trajectory" found in recent decades of the church's teaching, which has moved from what he called an "interim ethic of deterrence" to an "interim ethic of disarmament."

While previous popes have called for the abolition of nuclear weapons, they also granted conditional moral acceptance to nuclear deterrence, which arose after World War II when the United States and the Soviet Union stockpiled nuclear weapons in order to discourage either country from launching an atomic attack.

Pope John Paul II, for example, said in a message to the United Nations in June 1982 that deterrence could be judged "morally acceptable" as "a step on the way toward a progressive disarmament."

The U.S. bishops followed John Paul's lead in their pastoral letter, offering a "strictly conditioned moral acceptance of nuclear deterrence" but adding: "We cannot consider it adequate as a long-term basis for peace."

Since 1983 when the letter was released, Gumbleton said, "We haven't made any steps toward progressive disarmament."

"We've gone the other direction, and yet the bishops, who published that statement in 1983, have not made any demands that that condition be met," he said. "And until we begin to do that, a statement that possession is not right I don't think carries any weight."

"I know that when we wrote the peace pastoral, we didn't expect and didn't demand that the United States unilaterally, immediately get rid of its nuclear weapons," said Gumbleton. "We said: engage in progressive disarmament. And for a while there was some effort. But that isn't going on anymore."

Colecchi said the U.S. bishops' teaching on deterrence has developed since the 1983 pastoral letter and that in more recent years the prelates have been calling on political and military leaders to "move beyond" deterrence.

"I think we've already moved beyond the literal teaching of the peace pastoral," he said, recalling a visit he made with then-Archbishop Edwin O'Brien to U.S. Strategic Command in Omaha, Nebraska, where the prelate used the "move beyond" language with military officials.

"This is all part of a trajectory," said Colecchi. "You cannot keep an interim ethic of deterrence indefinitely. It's supposed to be a step towards disarmament. That's what an interim ethic refers to."

"The teaching is now we have to move beyond deterrence," he said. "That's been clear in statements of the bishops' conference for years now."

Related: Nuclear Weapons and Moral Questions: The Path to Zero

Francis' Nov. 10 statement has also made an impact beyond the Catholic community. Arms control advocates say the pope's condemnation of the possession of nuclear weapons is something they can use in discussions with world and military leaders when making a moral argument for disarmament.

It's a "powerful tool," said Nickolas Roth, a research associate for the "Managing the Atom" project at Harvard Kennedy School's Belfer Center for Science and International Affairs.

"Certainly, to anyone in the military involved with nuclear weapons who sees the pope as a moral leader … this could present a moral dilemma," said Roth, who was previously a policy analyst at the Union of Concerned Scientists and the program director for the Alliance for Nuclear Accountability. 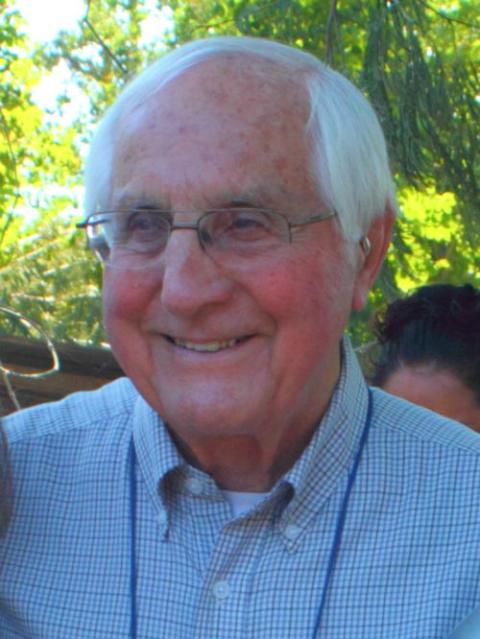 Robert G. Gard Jr., a retired lieutenant general in the U.S. Army who has focused on nuclear non-proliferation issues for decades, expressed skepticism about the practical impact the pope's statement would have on the nuclear powers but said it was "a strong moral position."

"The pope commands great moral authority and I think takes a position that strongly implies that we should be more actively pursuing ways to try to do away with these weapons," said Gard, a member of the advisory board of the Center for Arms Control and Non-Proliferation.

Some advocates noted that the pope's position on the possession of nuclear arms follows up on a similar statement the Vatican's permanent representative to the U.N. offices in Geneva submitted to the Vienna Conference on the Humanitarian Impact of Nuclear War in December 2014.

While that statement did not denounce states that have nuclear weapons, it called their possession "morally problematic." It noted that the church had given a "provisional acceptance" to nuclear deterrence in the past, but said that acceptance was given insofar as deterrence was a step on the path to disarmament.

"This condition has not been fulfilled — far from it," said the statement. "In the absence of further progress toward complete disarmament, and without concrete steps toward a more secure and a more genuine peace, the nuclear weapon establishment has lost much of its legitimacy."

Roth pointed to the 2014 statement and said Francis' Nov. 10 speech "certainly advances the ideas that were originally in that document."

Gard said he did not think Francis had completely withdrawn the church's acceptance of the nuclear deterrence strategy but was trying to respond to the 122 countries that signed the U.N. treat to ban nuclear weapons.

"I don't think … if you had a chance to cross-examine the pope that he would deny the necessity for and the validity of deterrence under the current situation," said the retired lieutenant general. "I don't believe that's necessarily inconsistent."

Gumbleton called the current strategy of deterrence a "situation of sin" because it involves the intention to use nuclear weapons, which kill indiscriminately. He said that during the process of drafting the 1983 pastoral letter the bishops spoke with then-Defense Secretary Caspar Weinberger who "made it clear there is an intention to use [the weapons]." 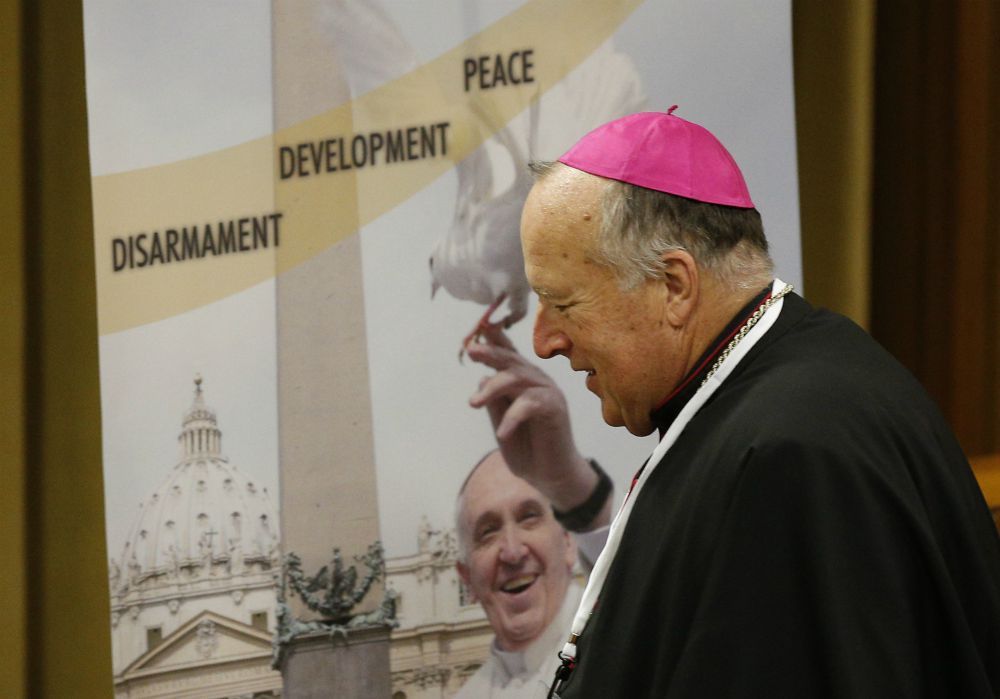 Bishop Robert McElroy of San Diego passes a banner showing Pope Francis before the start of a conference on building a world free from nuclear weapons, at the Vatican Nov. 10. (CNS/Paul Haring)

"Once you realize that deterrence in itself includes the intention to use the weapon, then you have to say we can't do it," Gumbleton said.

"Now, does that mean get rid of every nuclear weapon today?" he asked. "Ideally, it would mean that. But we're living in a world where it has taken a long time to build up this arsenal, so it's going to take time to begin to dismantle on a common basis among the various countries who have the weapons."

"That's why we accepted what [John Paul II] said as the condition for maintaining deterrence: it has to be a step on the way toward progressive disarmament," Gumbleton explained.

"At the beginning, you could say there was some determination to fulfill the condition," said the bishop. "At least, I thought there was. But since then I've come to admit I was wrong."

"There wasn't a clear commitment, because any time we tried five or 10 years later to say are we living up to the condition we got nowhere," he said. "There was no real conviction that we have to live up to that condition."

A version of this story appeared in the Dec 1-14, 2017 print issue under the headline: Gumbleton rejects earlier position on nuclear deterrence.