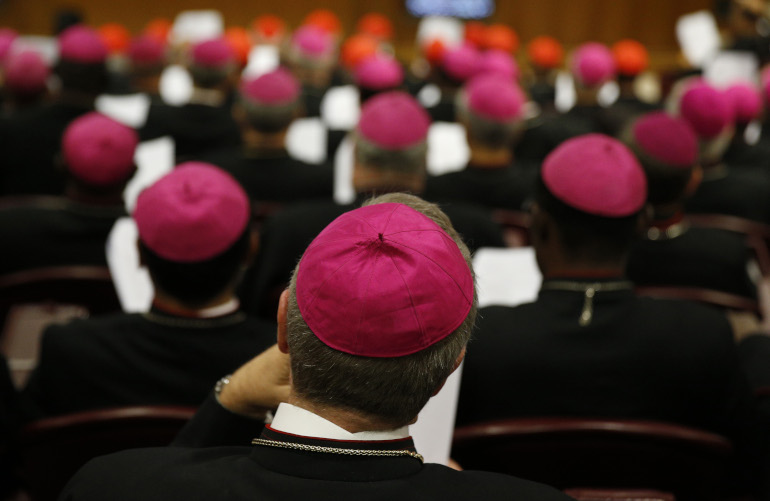 Bishops attend a session of the Synod of Bishops on young people in October 2018. (CNS photo/Paul Haring)

The Vatican officially released Sept. 21 the full list of participants, auditors and collaborators for October's hotly anticipated global meeting of Catholic bishops from the Amazon region.

Among the details: Pope Francis has personally appointed two U.S. bishops to take part in the proceedings, selecting Boston Cardinal Sean O'Malley and San Diego Bishop Robert McElroy. They will join the only other American, Cardinal Kevin Farrell, who will be participating in his role as prefect of the Vatican's Dicastery for the Laity, Family, and Life.

The vast majority of the other 185 voting members of the Oct. 6-27 gathering will come from the Amazon region. The country with the most representatives is Brazil, with 58 members. Colombia comes next with 15, followed by Bolivia with 12.

Besides O'Malley and McElroy, Francis appointed 31 others members to the Synod on his own authority, selecting a diverse group of prelates from Europe, Central and South America, and Africa.

Thirteen heads of the various Vatican offices will also participate, as will 15 delegates of the global umbrella group representing men's religious orders.

Although drafts of the final document from the last synod gathering, held in October 2018, had made notice of global calls for future synods to include women as voting members, the list of participants for the Amazon synod does not do so.

Instead, among the 80 total non-voting participants are 20 women religious and 13 laywomen. Ten of the women religious are delegates of the global umbrella group representing women's religious orders, the International Union of Superiors General.

Included in Francis' personal choices as members of the Amazon synod are:

The Vatican has made the full list of synod participants, auditors and collaborators available online.