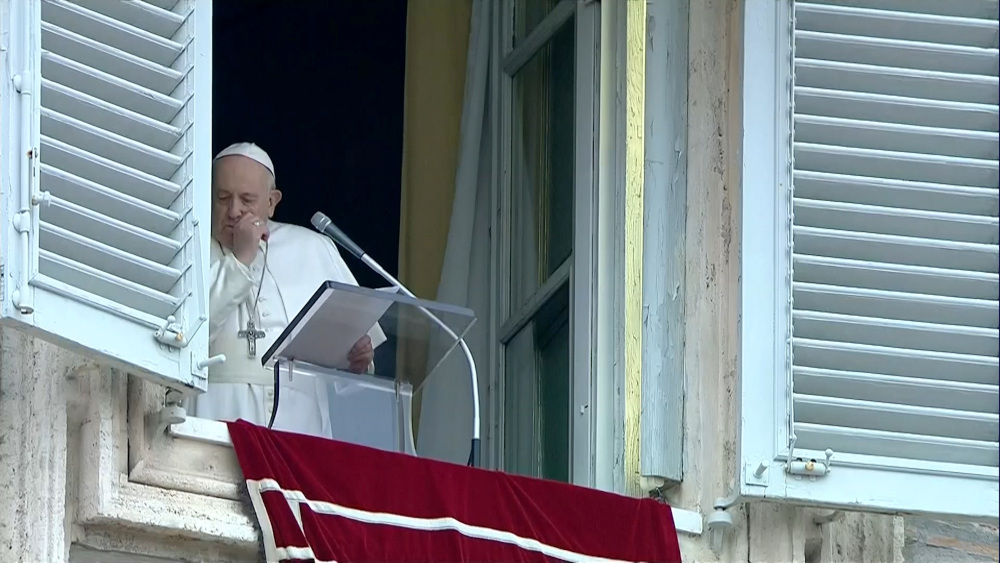 Pope Francis coughs as he leads the Angelus from the window of his studio overlooking St. Peter's Square at the Vatican March 1, 2020. (CNS/Reuters/Vatican Media)

After an unsubstantiated report in an Italian newspaper sparked global headlines March 3 that Pope Francis had been tested for exposure to the coronavirus, the Vatican reaffirmed in a statement that the pontiff was only suffering from a normal cold.

Matteo Bruni, the director of the Holy See Press Office, said that the pope's cold was "running its course, without symptoms ascribable to any other diseases."

Francis has been showing signs of a cold since the middle of last week. During his Sunday Angelus address in St. Peter's Square March 1, the pontiff said he had decided not to attend a scheduled weeklong Lenten spiritual retreat in order to recover.

The pope has however continued to take small meetings at the Vatican's Domus Sanctae Marthae where he lives, and is still celebrating his usual daily morning Mass with others who live at the guesthouse.

Italian newspaper Il Messaggero had reported earlier March 3 that the Vatican had administered a coronavirus test to Francis, which it said had come back negative. The newspaper, which phrased the report in the Italian conditional tense, did not provide any explanation for the source of its claim.

Several major English-languages newspapers and news agencies had repeated the claim within hours, with most noting the lack of clear sourcing on the report.

Italy is suffering from a coronavirus outbreak, but most of the cases have occurred in the north of the country, far from Rome. In its latest update March 3, the Italian government said that only 14 of 2,263 confirmed cases were located in Lazio, Rome's wider region.