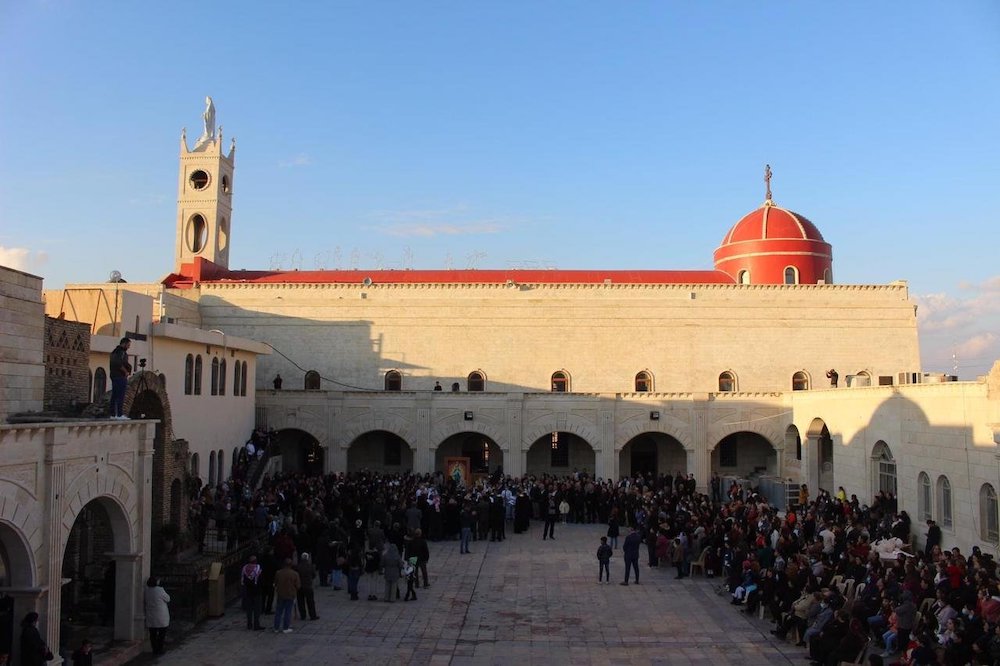 Crowds surround Cardinal Pietro Parolin, Vatican secretary of state, Dec. 28, 2018, as he visits the Syriac Catholic cathedral, St. Mary al-Tahira, in Qaraqosh, a city in the Ninevah Plains, where some 100,000 Christians were uprooted in 2014 by Islamic State fighters. (CNS/Vatican Media)

Traveling during an ongoing global pandemic. Heading to a country where suicide bombings are a threat. Preparing for the first meeting between a pope and one of the world's leading Muslim clerics.

Even for a pontiff who has undertaken some difficult trips abroad, Pope Francis' planned visit to Iraq, March 5 to 8,  has more than a usual share of complexity.

Add to the list: encouraging a small but historic Christian community that is still reeling from three years of devastation wrought by Islamic State militants who destroyed churches and forced hundreds of thousands to flee a brutal fundamentalist regime.

Yet, given all the possible difficulties, Iraqi analysts and Christian leaders told NCR that the mere fact of the pope's coming should outweigh any problems.

As Baghdad-based Marsin Alshamary said when asked if Iraqis would be looking for Francis to broach specific subjects or themes while in the country: "The symbolism of the pope visiting Iraq is quite enough of a gesture."

"Even if he came and said the very typical things we expect a religious leader to say, it's still something very important and very symbolic that he has done for Iraq," said Alshamary, an Iraqi and post-doctoral fellow at the Brookings Institution.

Archbishop Bashar Matti Warda, who leads the Chaldean Catholic community in Erbil, also highlighted the simple meaning of the pope choosing to come and visit.

"Right from the beginning of his papacy he spoke about the marginalized groups," said Warda. "He is coming to be face to face, to show us he cares about us." 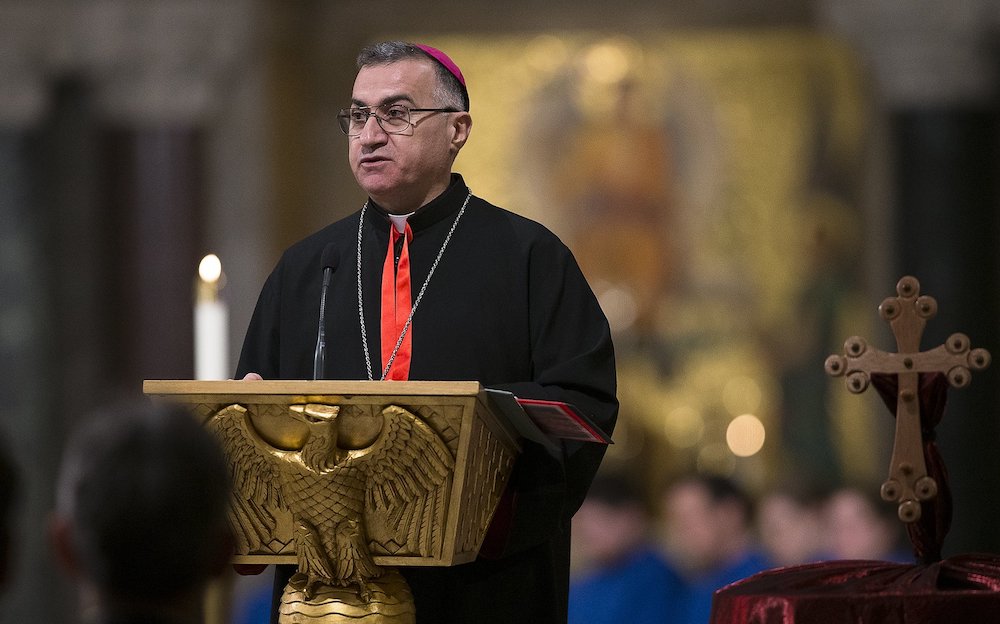 Chaldean Catholic Archbishop Bashar Warda of Irbil, Iraq, gives a testimony of Christian persecution Nov. 28, 2018, during a vespers service in the Crypt Church at the Basilica of the National Shrine of the Immaculate Conception in Washington. (CNS/Tyler Orsburn)

Francis' visit to Iraq, during which he is scheduled to visit six cities over three days, will be his first abroad since November 2019. He canceled all travel planned for 2020 due to the ongoing coronavirus pandemic.

Although Iraq announced a new partial coronavirus lockdown Feb. 15, including the temporary closure of all the country's mosques and churches, the Vatican is continuing preparations for the trip and has not yet said whether it might be postponed.

The pope and those traveling with him are being vaccinated by the Vatican in advance of the journey. Local organizers are also stressing that stringent social distancing and masking protocols are being put in place.

Warda, who is overseeing preparations for a planned March 7 Mass at Erbil's Franso Hariri soccer stadium, said organizers are strictly limiting the numbers of those able to attend, assigning seats, and collecting phone numbers.

"God forbid any case would emerge, we would know exactly where this person was and we could inform those who around him or her that there was a case," said the archbishop.

The Vatican has not addressed possible concerns for the pope's safety in Iraq. While violent attacks have largely subsided since the Iraqi government drove the Islamic State group underground in late 2017, there was a twin suicide bombing in Baghdad Jan. 21 that killed at least 32 people.

There was also a rocket attack against U.S.-led coalition forces near Erbil's airport Feb. 15, killing one civilian contractor and injuring others.

Francis has said before that he is not afraid of death or of risking his life in ministry. In a 2015 interview, he said he only asks God that his death not be painful because "I'm a real wimp when it comes to physical pain."

The pope told Catholic News Service Feb. 1 that he would only postpone his planned visit to Iraq if there were a serious spike in coronavirus cases. "I am the pastor of people who are suffering," the pontiff said in explanation for why he feels he must make the trip.

One Vatican official suggested to NCR that Iraq's coronavirus prevention measures might bolster the pope's security. That person, who asked not to be named because they were speaking without permission from superiors, said the measures may limit access to events beyond what otherwise could have been planned. 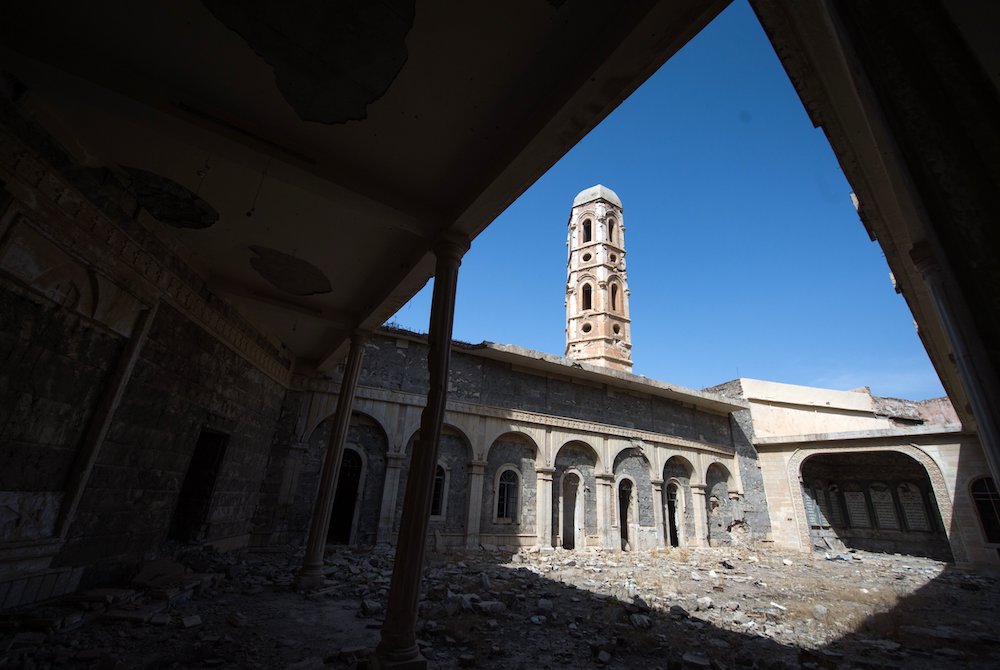 Debris is seen outside the Church of St. Thomas in Mosul, Iraq, in June 2019. (CNS/Marcin Mazur) 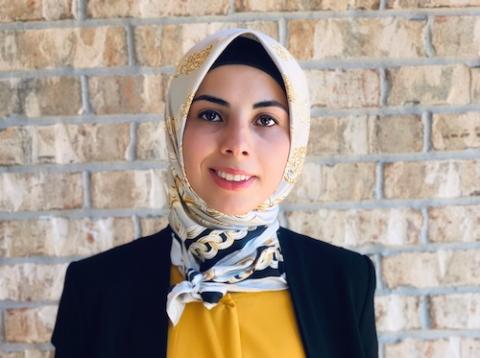 Francis' trip to Iraq will be the pope's 33rd visit abroad since his March 2013 election as pontiff. The itinerary for the visit indicates two main objectives: encouraging Christian communities in the country and pursuing high-level Muslim-Christian dialogue.

The first objective will be the focus on March 7, when the pope travels north from Baghdad to visit Erbil, Mosul and Qaraqosh (Bakhdida).

Mosul and Qaraqosh have historically had significant Christian communities that trace their origins to the earliest decades of the faith, but were decimated under Islamic State group control from 2014 to 2017.

The fundamentalist fighters killed thousands of Christians in what the European Parliament has recognized as a genocide. Hundreds of thousands of others fled as refugees, many heading the 50-some miles east to Erbil, in Iraq's autonomous Kurdistan Region, which the Islamic State group never controlled.

Warda's archdiocese took a leading role in offering shelter and help to the refugees. He said at one point they were offering assistance to some 13,000 families, but about 8,000 of those families have now been able to return to their towns of origin.

"We've learned from this experience about sharing, generosity," the archbishop said of the experience. "The evilness of ISIS has limited some of the life of the community, but God has opened other doors with love and generosity."

Yousif Kalian, a program specialist at the U.S. Institute of Peace based in Erbil, said Francis will be visiting a Christian community "whose spirit has been broken."

"What the pope's visit is doing is bringing back some of that hope again," said Kalian, whose work focuses on community reconciliation in the Ninewa province. "The visit is really going to be giving a huge vote of confidence from the pope to the people that they can handle and sustain themselves, despite the challenges."

Christians in Iraq belong to a range of rites and traditions and include Syriac, Assyrian, Chaldean, Armenian and Melkite communities.

While they once numbered about 1.5 million in a total population of  about 39 million, their numbers have diminished sharply in the years since the 2003 U.S.-led invasion of Iraq and are estimated now to number in the hundreds of thousands.

While in Mosul, Francis is scheduled to offer a prayer at a memorial for victims of Islamic State group violence. In Qaraqosh, the pope is to visit the St. Mary al-Tahira cathedral. The largest Syriac-Catholic church in the Middle East, it is still under repair after bring looted and set on fire by Islamic State group fighters.

Pursuing Muslim-Christian dialogue will be the pope's focus on March 6, when he travels south from Baghdad to Najaf for a private meeting with Grand Ayatollah Ali al-Sistani, one of the world's most influential Shiite Muslim clerics.

Alshamary and other experts said they expect that visit, the first of its kind, to be of historic import.

"Sistani is such a revered figure in Iraq, such a well-respected religious authority," said Alshamary, who focused her dissertation at the Massachusetts Institute of Technology on the involvement of Shia clerics in Iraqi politics. "It's quite important that they meet."

Gabriel Said Reynolds, a theologian at the University of Notre Dame who has focused on Muslim-Christian relations, said simply that Sistani is "widely regarded as the most authoritative religious actor for Shiite Muslims around the world."

Sunni and Shia are the two major branches of Islam. 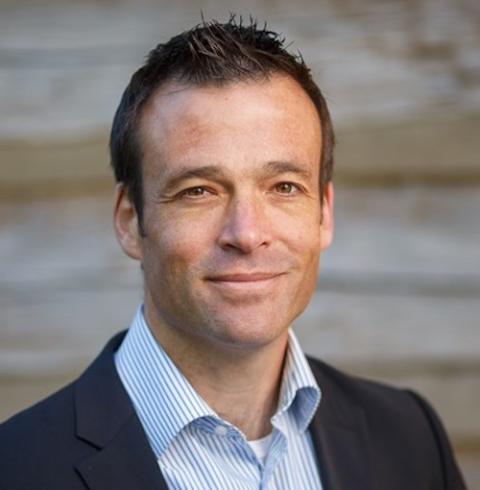 Francis has been pursuing dialogue with Muslim authorities throughout his papacy, but he has done so especially in the last few years. Iraq will be his ninth visit to a Muslim-majority country. Previous visits have included the first papal trips to Egypt and Abu Dhabi, United Arab Emirates, which was also the first papal trip to the Arabian Peninsula.

After hosting Francis in Egypt in 2017, el-Tayeb met the pope in Abu Dhabi in 2019 to sign a joint statement known as the "Document on Human Fraternity" that committed the two leaders to supporting interreligious dialogue, working to spread a culture of tolerance and disavowing the use of violence.

Reynolds said he did not know if Sistani in Iraq would also be willing to sign onto the document, but called the text a "revolutionary point" in Muslim-Christian dialogue.

"It opens the door for all sorts of possibilities of thinking through questions of religious freedom, freedom of expression, [and] cultural freedoms in the Islamic world," said the theologian.

Kalian highlighted the fact that Sistani is known to be selective about the people he chooses to meet.

"Ayatollah Sistani doesn't meet with just anybody," said Kalian. "It is well known and well documented that he only meets with people as a way to send a signal and a sign."

Citing Francis' recent focus on traveling to Muslim-majority nations, Reynolds called Muslim-Christian dialogue something of a "seamless thread" of this pontificate.

"Clearly, there's a trend, and he's deeply concerned about Muslim-Christian dialogue," Kalian said. "It's not just visiting troubled spots like Iraq, which has a political and human rights crisis, but it's specifically Muslim-majority nations. He cares deeply about that." 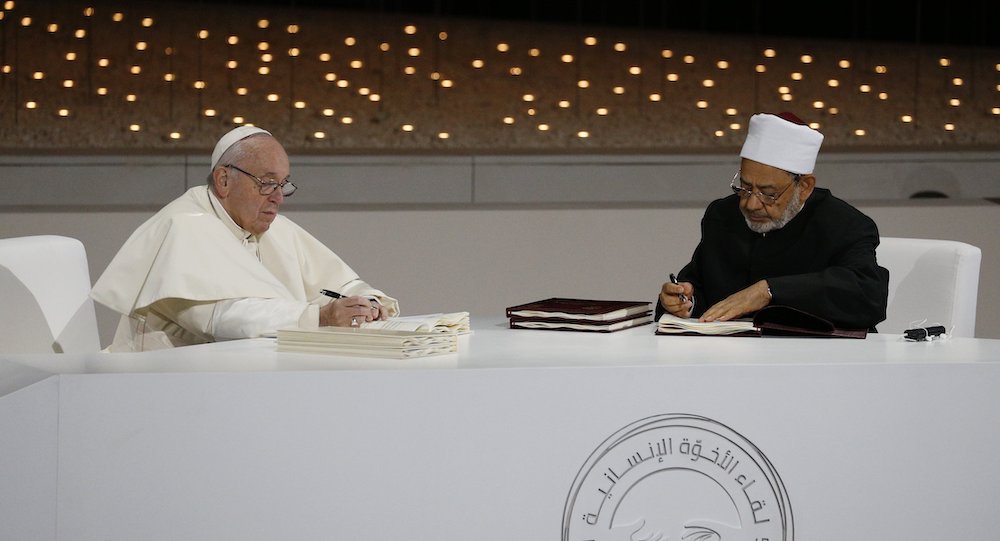 This story appears in the Pope Francis in Iraq feature series. View the full series.
A version of this story appeared in the March 5-18, 2021 print issue under the headline: Iraq papal trip complicated, even for Francis.