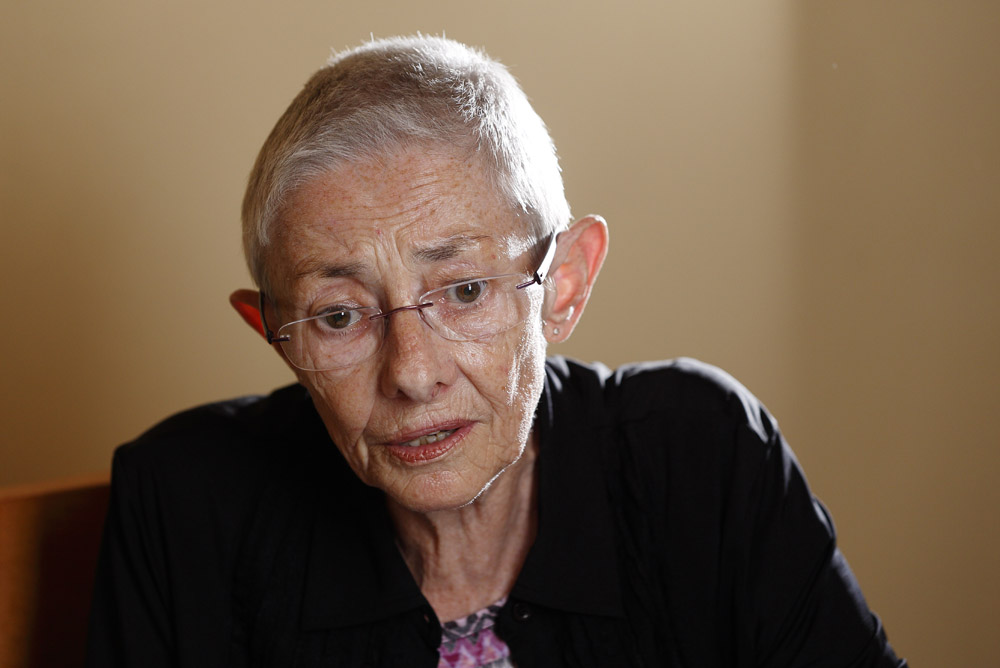 Krysten Winter-Green, a member of the Pontifical Commission for the Protection of Minors, speaks during an interview in Rome Sept. 12, 2016. (CNS/Paul Haring)

Pope Francis' commission on clergy sexual abuse is considering whether to restructure itself so that it no longer includes the direct participation of abuse survivors. It is evaluating the possibility of creating instead a separate advisory panel of individuals who have been abused by clergy.

A member of the Pontifical Commission for the Protection of Minors revealed the group's consideration of the idea in an NCR interview Aug. 14, saying that one of the commission's work groups has been tasked with weighing the pros and cons of such a change.

The commission appears likely to discuss the possible restructuring at its next plenary meeting in Rome in mid-September, when the original three-year terms of its members are set to expire.

"I think that may be a more productive [way] of ensuring the voice of survivors in the work of the commission," Krysten Winter-Green, the commission member, said of the potential change. "I do not know that it's critical that a survivor needs to be actually on the commission."

"No decision has been made about this," she stressed, adding: "I think the voice of survivors needs to be heard by this commission. They need to have input into every facet of the operation. How that is accomplished remains to be seen, but it will be accomplished."

Consideration of a change in structure for the papal commission comes as the group has in recent months faced public questioning of its effectiveness in stopping future abuse of children and vulnerable people in the Catholic Church. The group now appears to be in the midst of a significant phase of transition. 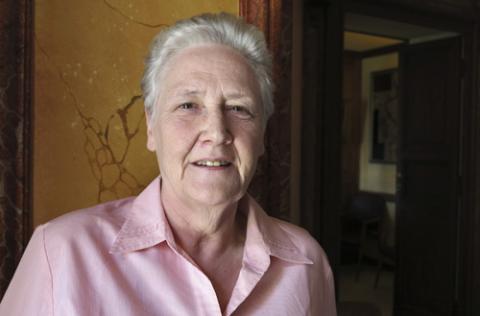 Marie Collins of Ireland, a survivor of clergy sexual abuse, is pictured in a 2014 photo. (CNS/Carol Glatz)

Six months ago, the commission lost its last active member who was an abuse survivor. Marie Collins resigned March 1, citing frustration with Vatican officials' reluctance to cooperate with the group's work.

While it appears likely Francis will reappoint most of the commission following conclusion of their three-year terms in September, member Jesuit Fr. Hans Zollner said in June he expects the composition of the membership may change.

Collins, an Irishwoman, was one of two survivors originally appointed to the commission. The other, Englishman Peter Saunders, was placed on leave from the group in February 2016 because of friction between Saunders and other members of the group.

'Acknowledgment of their failure'

Winter-Green, a native New Zealander who lives in the U.S. and provides consulting services to dioceses and religious congregations, did not detail exactly how the papal commission and a possible new survivors' advisory panel might function together.

Several national bishops' conferences have developed safeguarding entities and survivors' panels that could be used as models for the potential restructuring. The bishops' conference of England and Wales, for example, has a National Catholic Safeguarding Commission that receives counsel from a Survivor Advisory Panel.

The website for that panel describes its role as "to ensure that the National Catholic Safeguarding Commission receives appropriate and timely information and advice from a survivor perspective."

Survivors and survivor advocates were critical of the idea of keeping survivors off of the papal commission in favor of a separate advisory panel.

Peter Isely, a founding member of the Survivors Network of those Abused by Priests and the group's former Midwest director, said he would see such a shift as part of a desire to keep the papal commission free of conflict.

"There are thousands and thousands of survivors and many of them are public," said Isely. "If you cannot manage to directly bring in survivors ... to the commission, you're just putting the discussion and conflict aside."

"To make it two-removed, to make it advisors to advisors, is just an acknowledgement of their failure," he said.

"It's just pushing the issues that were unresolved from the three years ... one removed down," said Isely. "It's not a solution. It's making it more difficult to get to the solution, in my opinion."

Dominican Fr. Thomas Doyle, an expert on the church's response to clergy sexual abuse, was biting in his assessment of the idea.

"After three years, I'm not sure that they've done anything that's really meaningful."
—Fr. Thomas Doyle

"It sounds to me as if that idea is something that was conjured up to make the appearance that they're taking it seriously and doing something, while in fact it's simply another smoke and mirrors production," said Doyle.

Francis created the pontifical abuse commission in December 2013 at the recommendation of his advisory Council of Cardinals. The pope appointed the first members to the new commission, including its president, Boston Cardinal Sean O'Malley, on March 22, 2014.

The commission's statutes, available online, were approved in April 2015 by Vatican Secretary of State Cardinal Pietro Parolin. They state that the group is to continue on ad experimentum for three years, after which time it is to present any possible modifications to its operating procedures to Francis for approval.

Doyle and Isely were both also critical about the overall work of the commission and what it has accomplished since Francis first created the group.

Doyle said bluntly: "After three years, I'm not sure that they've done anything that's really meaningful."

The priest said that Collins' resignation and the statement she wrote for NCR at the time explaining her decision to leave the commission had been the "most effective action" to come out of the group.

"The one thing I think this point in the history of the commission proves very clearly is the lack of a commitment by the Holy See to effectively deal with the issue of child abuse by clergy," he said.

In her NCR statement March 1, Collins wrote about several instances of her frustration with Vatican officials' reluctance to work with the commission.

Collins said her resignation was immediately precipitated by one Vatican office's refusal to comply with a request from the commission, approved by the pope, that all letters sent to the Vatican by abuse survivors receive a response.

Isely said it was "most distressing" that the two survivors who had originally been appointed to the commission have now left active membership.

"You could not get a more qualified, reasonable, thoughtful and experienced survivor on that commission than [Marie Collins]," he said. "For her to lose hope ... is an extremely significant statement about the commission."

Mentioning Collins' revelation of difficulty getting Vatican officials to respond to survivors' letters, Isely asked: "If the pope can't even get that done, what else is he really going to be able to do?"

Winter-Green, who holds a doctorate in pastoral psychology and three master's degrees in theology, human development, and social work, pointed to other areas where the commission has had success. She said the group has done a lot of work educating church leaders in different parts of the world on how to best prevent abuse.

She cited numbers indicating that between 2015 and July 2017 commission members or their staff had given 110 presentations on abuse prevention in 45 countries.

"One of the quintessential goals that was decided when we first came together was the critical need for education," said Winter-Green.

"There continues to be a tremendous misunderstanding or ignorance about the serious moral and psychological harm done to children and vulnerable adults," she said. "There's a need for a changing of attitudes, particularly among the hierarchy."

The commission member also cited the success the group had in suggesting that Francis create a day of prayer in the church for survivors of abuse, which the pope approved.

"You can readily understand what a matter of frustration it is that everything moves so slowly at the Vatican."
—Krysten Winter-Green

Winter-Green said the commission's theology and spirituality work group is now working on a liturgy of healing that can be used around the world. "I think it's tremendously important that this happens and that it happens at the local level," she said.

"The church has looked at past abuse from a legal and financial perspective, largely ... but victims and survivors mostly want to be heard and believed," Winter-Green continued.

"It's my personal opinion that the church needs to front up to this," she said. "It needs to make this acknowledgment in a quintessentially pastoral and spiritual sense. It's the way that the wounds can be addressed."

While Winter-Green pointed to some of the commission's successes, she also reinforced some of the criticisms Collins had made in her March 1 statement about working with Vatican officials and the lack of resources and staffing made available to the group.

Winter-Green said part of the difficulty in making the commission effective has been learning to deal with the slow and sometimes inefficient work processes employed at the Vatican.

At the root of the issue, she said, is learning how to work effectively within the system.

"The Vatican doesn't work at any great speed of light," said Winter-Green. On the commission, she said, are "some highly qualified, professionally trained, thoughtful, wise and eloquent individuals. And you can readily understand what a matter of frustration it is that everything moves so slowly at the Vatican."

"It just doesn't happen overnight," she said. "Perhaps over a few months, if you're lucky. That's the way it is."

"One has to be aware of that and learn to work within that system," Winter-Green added. "Because otherwise you get nowhere."

Her group is understaffed and overworked, she said, adding that she spends about four to five hours per day on commission work for an average of five to six days a week.

"We have a horrendous job and a very slim budget," said Winter-Green. "The lack of transparent information regarding budgetary resources" was a "major challenge" facing the commission, she said.

"We're under-resourced in terms of having professionally prepared people who can manage the various complexities of the work," she said. "There's just not adequate resources."

A version of this story appeared in the Sept 8-21, 2017 print issue under the headline: Papal abuse commission looks at restructuring.