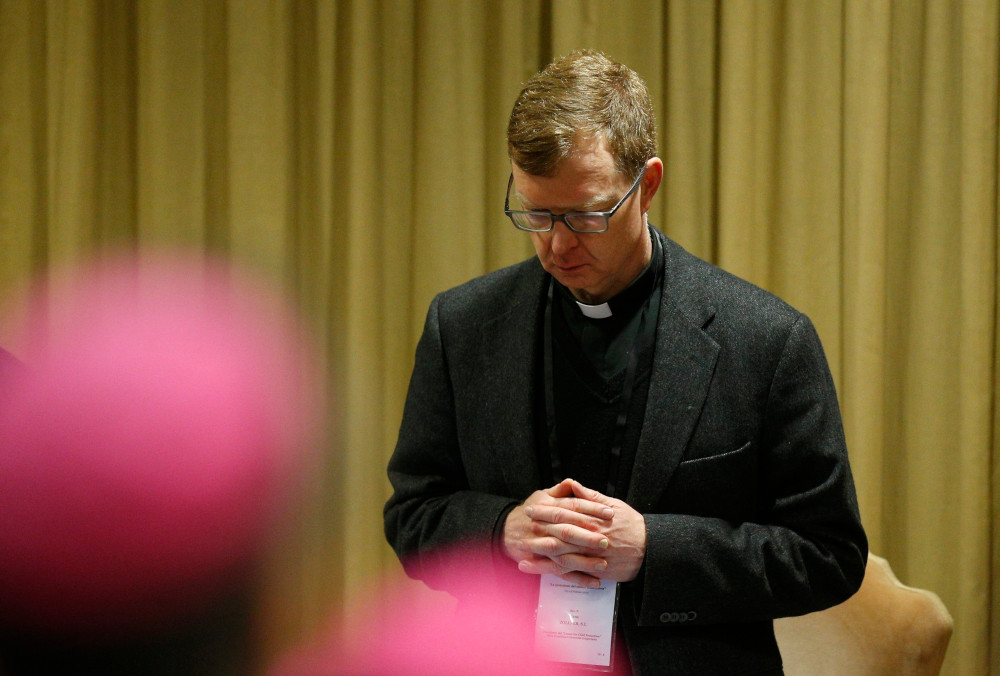 Jesuit Fr. Hans Zollner, a member of the Pontifical Commission for the Protection of Minors, prays during the 2019 meeting at the Vatican on protecting young people in the church. (CNS/Paul Haring)

Given the COVID-19 pandemic, members of the Pontifical Commission for the Protection of Minors met online and, for those who could, in Rome for their plenary assembly Sept. 16-18.

"It was business as usual," Jesuit Fr. Hans Zollner, a commission member, told Catholic News Service Sept. 18. The meetings, held twice a year, give the 17 members a chance to listen to each working group's progress report and to lay the groundwork for future action.

Everyone was in attendance, he said, including U.S. Cardinal Sean P. O'Malley of Boston, commission president, who took part online.

With members on each continent, Zollner added, the challenge was finding meeting times to accommodate people in vastly different time zones; that meant signing in after midnight for one member on the Polynesian archipelago of Tonga and being up before 6 a.m. for members in the Americas.

They discussed the opportunities and challenges presented by the ever-changing nature of "virtual and digital realities and the impact of lockdowns and quarantines, particularly for minors and for people who have suffered abuse," it added.

Of the different working groups, the group working with survivors held several meetings online with those who had been abused and with family members and experts, it said.

That group will take the insight learned from those meetings and turn them into "a series of webinars and seminars on ministry to those who have been abused, taking into account diverse cultural contexts."

The pandemic has had a huge impact on the pilot project of local "survivor advisory panels," it said, but there has been progress. For example, it said, the panel in Brazil inspired the creation of "an office to help as a task force for the Special Safeguarding Commission as it implements 'Vos estis lux mundi,'" Pope Francis' letter on the duty and accountability of leaders to protect their flock.

Zollner said the working group he belongs to, on education and formation, talked about the four webinars on safeguarding that were held over the summer and sponsored by the women's International Union of Superiors General.

The commission looked at the feedback from online attendees, who represented religious orders, formation or safeguarding departments, educators and others, who said they "expressed interest in further online formation in practical matters of safeguarding."

The group will work on "offering such online formation programs in the immediate future," the commission said.

The working group on safeguarding guidelines and norms had held a special seminar in December on "Promoting and Protecting the Dignity of Persons in Allegations of Abuse of Minors and Vulnerable Adults: Balancing Confidentiality, Transparency and Accountability."

All the contributions presented at that seminar, Zollner told CNS, would be published in the next canon law journal published by the Pontifical Gregorian University.

Different offices of the Roman Curia collaborated with the effort, he said, and the commission said it believes the collection of the seminar's discussions about "procedural issues affecting the sacrament of reconciliation, canonical processes and matters of jurisprudence" will make a "significant contribution to scholarship in these important areas."

Lastly, the commission said members would continue to help local churches and religious congregations implement current church laws and procedures on handling accusations of abuse by clerics against minors.