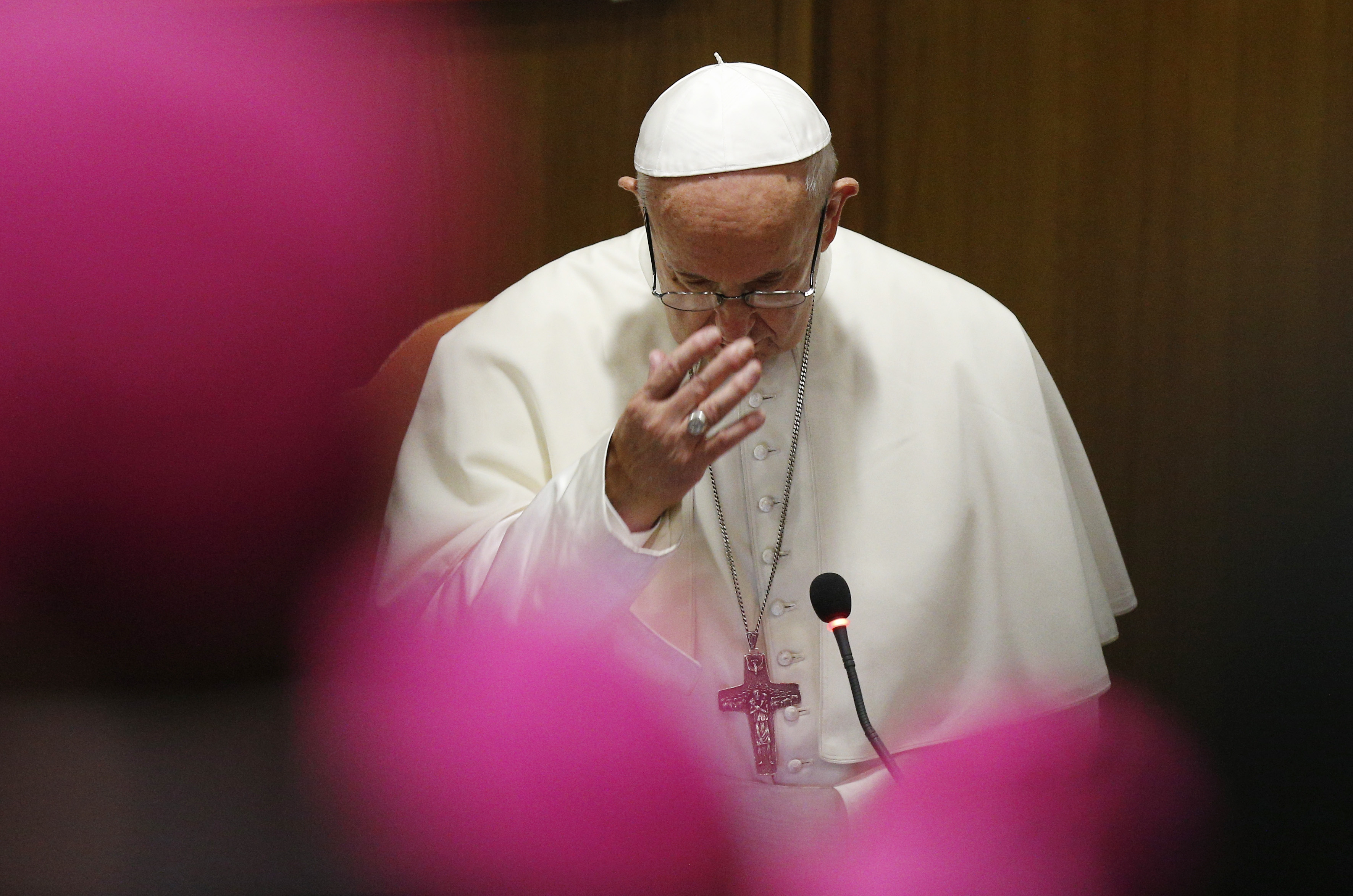 Pope Francis makes the sign of the cross as he prays during the opening session of the Synod of Bishops on young people, the faith and vocational discernment at the Vatican Oct 3. (CNS/Paul Haring)

Pope Francis asked bishops to be bold, honest, open-minded, charitable and, especially, prayerful as they begin a three-week meeting on "young people, the faith and vocational discernment."

While many young people think no older person has anything useful to teach them for living today, the pope said, the age of the bishops, combined with clericalism, can lead "us to believe that we belong to a group that has all the answers and no longer needs to listen or learn anything."

"Clericalism is a perversion and is the root of many evils in the church," Francis said Oct. 3 at the synod's first working session. "We must humbly ask forgiveness for this and above all create the conditions so that it is not repeated."

The pope formally welcomed 267 bishops and priests as voting members of the synod, eight fraternal delegates from other Christian churches and another 72 young adults, members of religious orders and lay men and women observers and experts at the synod, which will meet through Oct. 28.

He also thanked the thousands of young people who responded to a Vatican questionnaire, participated in a presynod meeting in March or spoke to their bishops about their concerns. With the gift of their time and energy, he said, they "wagered that it is worth the effort to feel part of the church or to enter into dialogue with her."

"Our responsibility here at the synod," the pope said, "is not to undermine them, but rather to show that they are right to wager: It truly is worth the effort, it is not a waste of time!"

Francis began the synod with an invitation that every participant "speak with courage and frankness" because "only dialogue can help us grow."

But he also asked participants to be on guard against "useless chatter, rumors, conjectures or prejudices" and to be humble enough to listen to others.

Many of the synod participants arrived in Rome with the text of the three-minute speech they intended to give, but the pope asked them "to feel free to consider what you have prepared as a provisional draft open to any additions and changes that the synod journey may suggest to each of you."

A willingness to "change our convictions and positions," he said, is "a sign of great human and spiritual maturity."

The synod is designed to be an "exercise in discernment," the pope told them. "Discernment is not an advertising slogan, it is not an organizational technique or a fad of this pontificate, but an interior attitude rooted in an act of faith."

Discernment "is based on the conviction that God is at work in world history, in life's events, in the people I meet and who speak to me," he said. It requires listening and prayer, which is why the pope has added a rule that after every five speeches there will be a three-minute pause for silent reflection and prayer.

Listening to the Spirit, listening to God in prayer and listening to the hopes and dreams of young people are part of the church's mission, the pope said. The preparatory process for the synod "highlighted a church that needs to listen, including to those young people who often do not feel understood by the church" or feel they "are not accepted for who they really are, and are sometimes even rejected."

"Adults should overcome the temptation to underestimate the abilities of young people and [should] not judge them negatively," he said. "I once read that the first mention of this fact dates back to 3000 B.C. and was discovered on a clay pot in ancient Babylon, where it is written that young people are immoral and incapable of saving their people's culture."

Young people, too, he said, must "overcome the temptation to ignore adults and to consider the elderly 'archaic, outdated and boring,' forgetting that it is foolish always to start from scratch as if life began only with each of them."

Francis, who was asked by a couple of bishops to postpone the synod because of the clerical sexual abuse scandal, said he knows the present moment is "laden with struggles, problems, burdens. But our faith tells us that it is also the 'kairos' [opportune moment] in which the Lord comes to meet us in order to love us and call us to the fullness of life."

The goal of the synod, Francis said, is not to prepare a document -- synod documents, he said, generally are "only read by a few and criticized by many " -- but to identify "concrete pastoral proposals" that would help all church members reach out to, walk with and support the faith of young people.

In other words, he said, the goal is "to plant dreams, draw forth prophecies and visions, allow hope to flourish, inspire trust, bind up wounds, weave together relationships, awaken a dawn of hope, learn from one another and create a bright resourcefulness that will enlighten minds, warm hearts, give strength to our hands and inspire in young people -- all young people, with no one excluded -- a vision of the future filled with the joy of the Gospel."