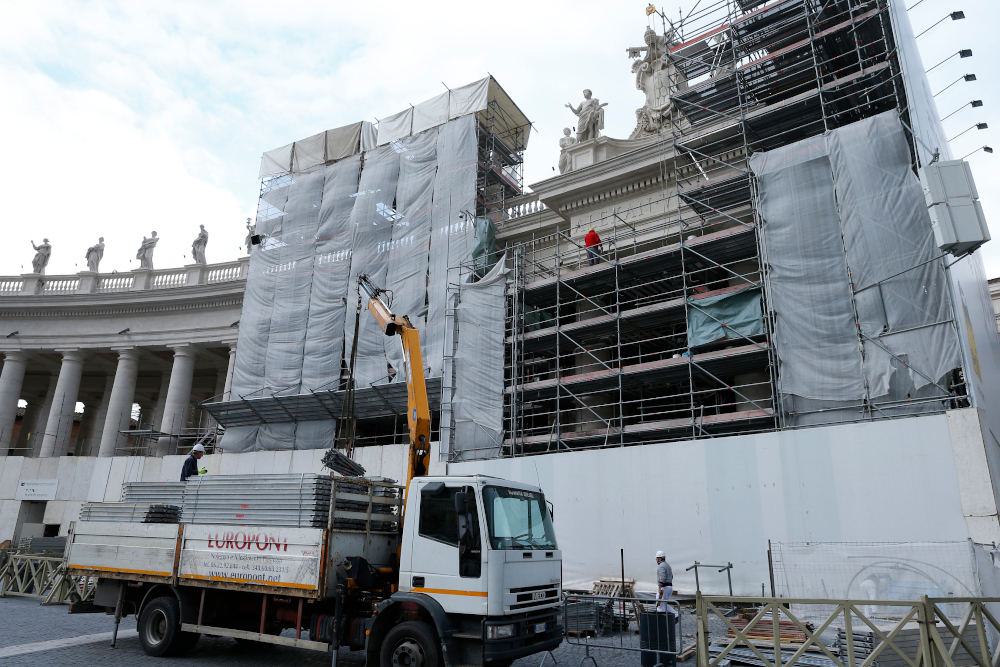 Vatican workers remove scaffolding from the final restored section of the colonnade in St. Peter's Square at the Vatican in this January 2014 file photo. Pope Francis issued a new set of laws June 1, 2020, that govern the awarding of contracts for goods and services provided by outside vendors. (CNS/Paul Haring)

To prevent fraud and corruption, uphold Catholic principles and save money, Pope Francis has issued a new set of laws covering contracts for the purchase of goods, property and services for both the Roman Curia and Vatican City State offices.

"To allow a more effective management of resources, I therefore decided to approve a set of norms aimed at promoting transparency, supervision and competition in the procedures for rewarding public contracts," Francis wrote in a document published June 1 and issued "motu proprio," or on his own authority.

Promoting true competition and transparency in asking for and accepting bids on Vatican contracts "will allow for a better management of the resources the Holy See administers to promote the aims proper to the church, guaranteeing at the same time equal treatment and opportunity" for outside companies when their services are required, the pope wrote.

In more than 30 pages of procedures and norms for purchasing property, goods and services, the new laws specify that ethics and Catholic social teaching must be part of determining what to purchase and from whom.

Contracts will not be awarded to any company or individual who has been charged with or convicted of "participation in a criminal organization, corruption, fraud," terrorism or funding terrorist organizations, money laundering, tax evasion, "exploitation of child labor" or human trafficking, or having "committed serious violations of obligations in the environmental sphere," the text said.

The Vatican will draw up a list of experts from various offices and departments who will serve on rotating juries to evaluate bids on individual projects; Vatican employees will be excluded from a jury if they are related by blood or marriage to a person making the bid. The norms specify the exclusion in the presence of "four degrees" of blood relationship or two degrees of "affinity."

The new laws promulgated by Francis aim to save money by establishing central purchasing offices at the Governate for Vatican City State and at the Administration of the Patrimony of the Holy See for offices of the Roman Curia.

"The theme of reducing expenditures is extremely relevant and important at this moment — which unfortunately is destined to continue — of serious economic difficulties for the entire world, but also specifically for the Holy See and Vatican City," Giuseppe Pignatone, president of the Vatican City State tribunal, wrote in a commentary for Vatican News.

Pignatone and the other judges on the tribunal will be responsible for enforcing the new laws, suspending suspicious contracts and resolving any conflicts between parties involved in making the contracts.

Vincenzo Buonomo, rector of Rome's Pontifical Lateran University and a legal consultant to the Vatican, said told Vatican News the laws are designed to help the Vatican "avoid contracts and transactions that are the antithesis of correct administration" and will help "eliminate the plague of waste, losses and prevent corruption in its various forms."

The laws also will promote better budgeting, he said, by requiring each Vatican office to turn in by Oct. 31 a list of goods or services it will require during the next calendar year.

The hope, Buonomo said, is that each Vatican office increasingly will see itself as a part of the whole and take responsibility for contributing to "a better management of the resources of the Holy See."