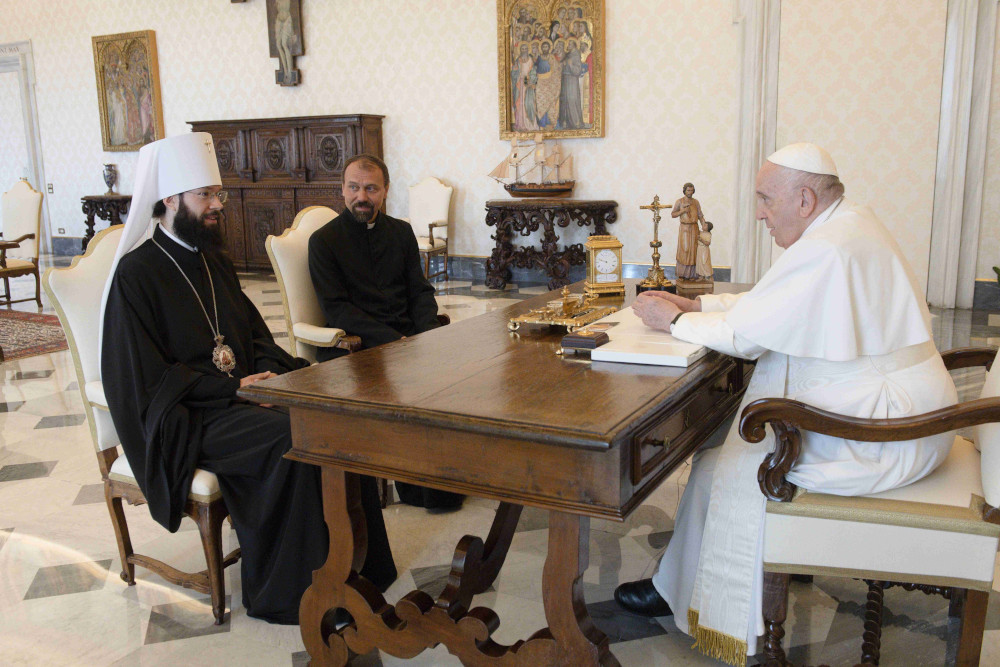 Pope Francis talks with Metropolitan Anthony of Volokolamsk, left, head of external relations for the Russian Orthodox Church, at the Vatican in this Aug. 5, 2022, file photo. Metropolitan Anthony confirmed to the Russian news agency RIA that Patriarch Kirill, who was expected to meet the pope at the Congress of World and Traditional Religions in Kazakhstan, will not attend the interreligious gathering in September. (CNS photo/Vatican Media)

Russian Orthodox Patriarch Kirill, who was expected to meet Pope Francis at the Congress of World and Traditional Religions in Kazakhstan, will not attend the interreligious gathering in September, a senior Russian Orthodox bishop said.

Metropolitan Anthony of Volokolamsk, head of external relations for the Russian Orthodox Church, confirmed to the Russian news agency Ria Novosti that the patriarch will not attend the Sept. 13-15 meeting in the Kazakh capital of Nur-Sultan.

However, Anthony, who met with the pope at the Vatican Aug. 5, said there was still hope for the pope and the patriarch to meet and that an eventual meeting between the two "must be an independent event by virtue of its importance."

Kirill's outspoken support of Russian President Vladimir Putin's war on Ukraine, particularly his justification of the war as a defense against Western immorality, has caused ruptures within the Russian Orthodox Church and strained relations with the Catholic Church.

The pope last met with the Russian patriarch in a Zoom meeting in mid-March. In a May 3 interview with the Italian newspaper Corriere della Sera, the pope told the patriarch that "we are not clerics of the state, we cannot use the language of politics, but of Jesus."

Francis' comment that "the patriarch cannot turn himself into Putin's altar boy" prompted criticism from the Moscow Patriarchate.

It is the second time that a face-to face meeting between Francis and Kirill has been canceled. In an interview with the Argentine daily newspaper La Nación April 21, the pope said the pair were to meet in Jerusalem in June.

However, he said, the Vatican's diplomatic team understood that such a meeting "at this time could lead to much confusion."

Cardinal Kurt Koch, president of the Dicastery for Promoting Christian Unity, who has been outspoken in his criticism of Patriarch Kirill's support for the war in Ukraine, said he was grateful the proposed meeting in Jerusalem was canceled, adding that a meeting between the two while "acts of war are still taking place" would "be exposed to serious misunderstandings."

"This is because it could be misunderstood as the pope's support of the patriarch's position, which would badly damage the pope's moral authority," Koch told the German newspaper Die Tagespost in late June.