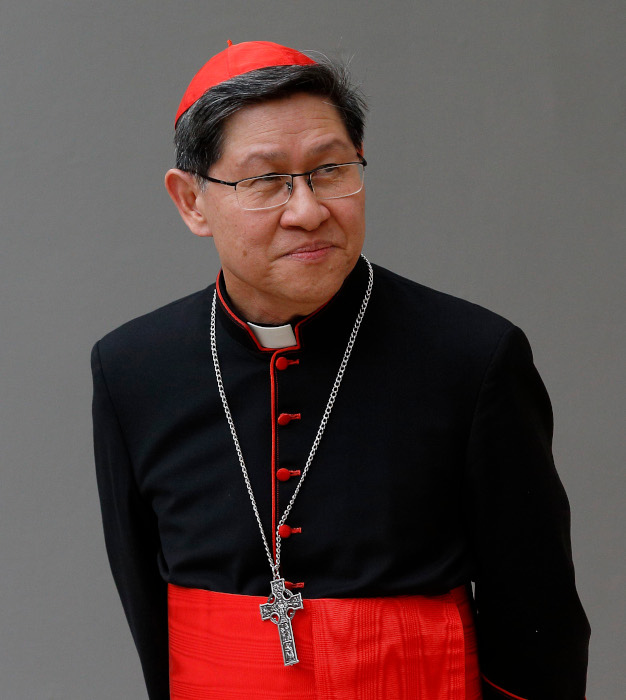 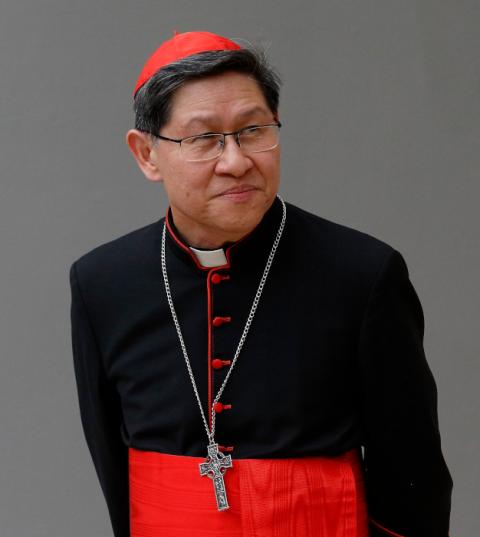 In a move that may signal Pope Francis' plan for the reform of the Roman Curia is close to completion, the pope has named Philippine Cardinal Luis Antonio Tagle of Manila prefect of the Congregation for the Evangelization of Peoples.

The 62-year-old cardinal succeeds Cardinal Fernando Filoni, 73, who since 2011 had led the Vatican office overseeing the church's vast mission territories.

Announcing Tagle's appointment Dec. 8, the Vatican also announced that Filoni would become grand master of the Equestrian Order of the Holy Sepulchre of Jerusalem. Filoni succeeds U.S. Cardinal Edwin F. O'Brien, 80, as grand master of the organization that supports Catholics in the Holy Land.

In a statement released by the order, O'Brien thanked Francis for allowing him to continue as grand master for five years after he submitted his resignation at the age of 75.

"Throughout my more than eight years as grand master, my personal faith and love of our church have deepened as I have witnessed our members' commitment to the goals of our order, expressed in different cultures and languages, all profoundly Catholic," O'Brien said.

His office said Dec. 9 that he plans to continue living in Rome.

Tagle is set to take up his new Vatican post early in 2020. The Congregation for the Evangelization of Peoples, often referred to as Propaganda Fide, is set to become part of a mega-Dicastery for Evangelization, at least according to a draft of the apostolic constitution on the Curia, "Praedicate Evangelium" ("Preach the Gospel").

Archbishop Gabriele Caccia, the nuncio to the Philippines, spoke at the end of a Mass celebrated by Tagle Dec. 9 in the Manila cathedral. He said the cardinal smiled through his homily, "but I know his heart is broken" at the thought of leaving. And even though Filipino Catholics are sad to lose the cardinal, he said, they must give him to the global church.

Tagle, he said, is "the best gift we have to give to the universal church." And he had everyone in the packed cathedral stand, extend their right arm and pray for God's blessing on the cardinal.

Mission, evangelization and dialogue have been recurrent themes in Tagle's teaching, preaching and public speaking.

At the 2012 Synod of Bishops on new evangelization, then-Archbishop Tagle emphasized the importance when evangelizing of imitating Jesus' humility and demonstrating real love and concern for all people, particularly "those neglected and despised by the world."

Being humble also means recognizing when the church does not have all the answers, and therefore being willing to remain silent, he said, adding that "a church at home with silence will make the voiceless believe they are not alone."

It was during the 2012 synod, at the age of 55, that he was informed he would be made a cardinal by Pope Benedict XVI. The November consistory to create six cardinals, including Tagle, was the last before Pope Benedict resigned three months later.

Born in Manila June 21, 1957, he was raised in Imus and went to a grade school and high school run by the Augustinians in Paranaque City. In 1973 he entered the seminary and began university studies at the Jesuit-run Ateneo de Manila University and San Jose Seminary in Manila.

Ordained to the priesthood in 1982 for the Diocese of Imus, he was sent to the United States for further studies, earning a doctorate in theology from The Catholic University of America.

In 1997, St. John Paul II named him to a five-year term on the International Theological Commission, the group of theologians who study specific questions at the behest of the Congregation for the Doctrine of the Faith. During his term, the president of the commission was Cardinal Joseph Ratzinger, the future Pope Benedict.

He served as an expert at the special Synod of Bishops on Asia in 1998 and, as a bishop, was a member of the synods in 2008 on the Bible, 2012 on evangelization and 2018 on young people. Francis chose him as one of the presidents delegate of the 2014 and 2015 synod assemblies on the family.