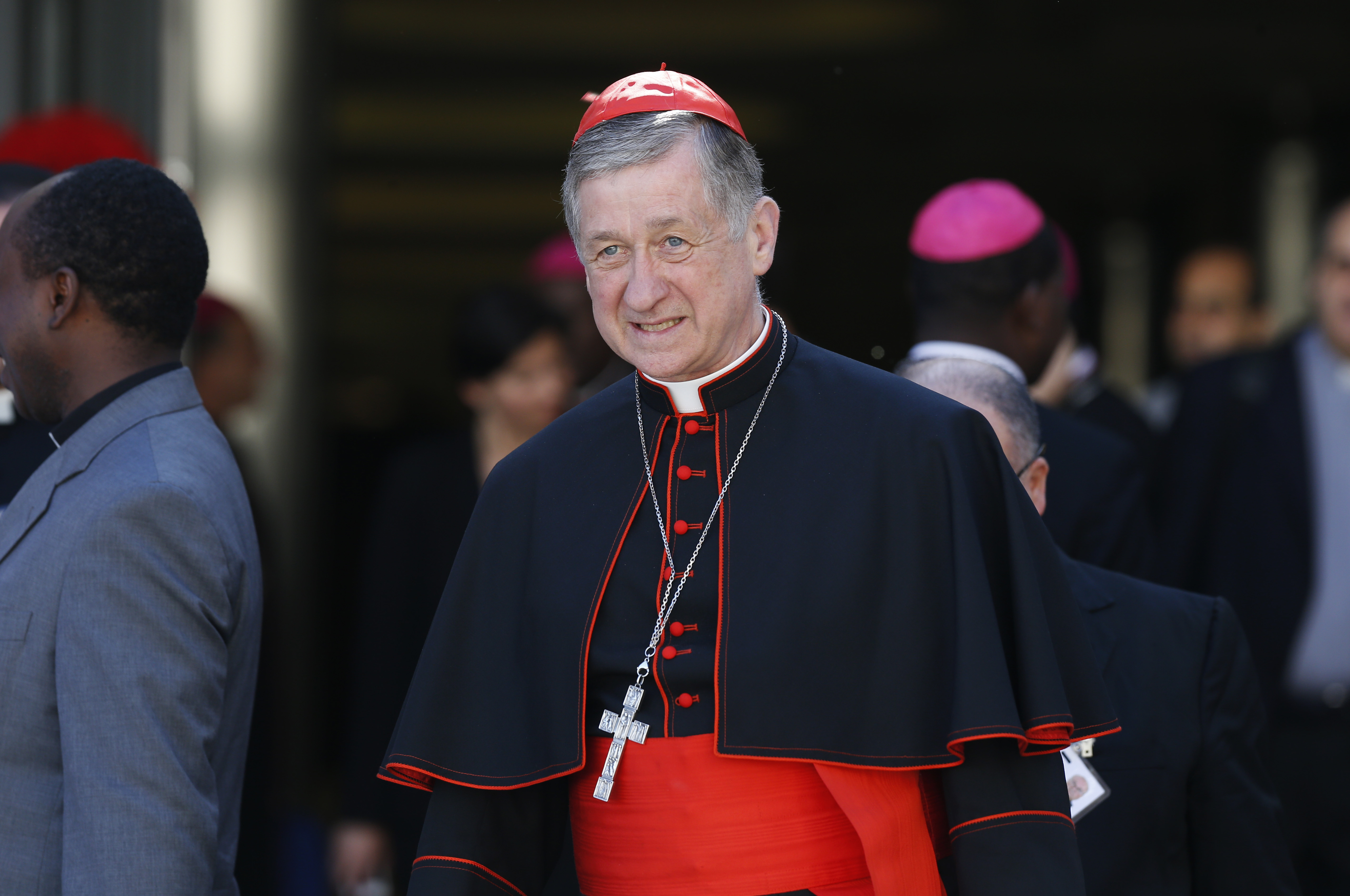 Cardinal Blase Cupich of Chicago has been appointed by Pope Francis to be part of the organizing committee for the Vatican's Feb. 21-24 global bishops meeting to address clerical sexual abuse. Cupich is pictured during the Synod of Bishops on young people, the faith and vocational discernment at the Vatican Oct. 18. (CNS/Paul Haring)

Pope Francis named U.S. Cardinal Blase Cupich of Chicago to be part of the organizing committee preparing for a meeting of the world's bishops' conferences and representatives of religious orders to address the abuse and protection of minors.

The Feb. 21-24 Vatican meeting is not only "about keeping children safe from harm worldwide," said Greg Burke, head of the Vatican press office, in a written statement Nov. 23.

"Pope Francis wants church leaders to have a full understanding of the devastating impact that clerical sexual abuse has on victims," he said, soon after the Vatican announced the members of the preparatory committee.

The Pontifical Commission for the Protection of Minors, headed by Boston Cardinal Sean O'Malley, and some survivors of abuse by members of the clergy also will be involved in the preparatory work for the meeting, the Vatican said.

"This a critical moment for the universal church in addressing the sexual abuse crisis," O'Malley said, and the February meeting "will be an important moment for developing a clear path forward for dioceses around the world."

"We must continue to embrace and practice a commitment to zero tolerance, work for greater transparency, including the release of names of clergy accused of abuse, and encourage all religious orders to adopt a similar policy and cooperate with civil and legal authorities. Above all else, we must place the support and pastoral care of survivors first," he said in a written statement Nov. 23.

"This is a lifelong journey" that "requires a partnership between the laity and clergy in responding to the failures of episcopal leadership by holding bishops accountable for the crimes against children and vulnerable adults," he said.

O'Malley said the pontifical commission, as an advisory body to the pope, proposed the global meeting for the world's bishops. He said the commission has hosted meetings between survivors and groups of newly named bishops, and those meetings "have inspired our view that calling the bishops to Rome for a similar high-impact meeting would be very important in addressing the clergy abuse crisis globally."

Cupich told Crux Nov. 23 that while Francis understands very well the degree of suffering in the United States because of abuse, the pope is calling a global meeting because "he understands this to be a global issue."

"The pope is seeking both a comprehensive understanding of past failings, as well as global solutions moving forward," the cardinal said Nov. 23.

Cupich told Crux it will be critical that all church leaders take "ownership for our failures fully in order to ensure they are not repeated." This will require clearly defining responsibilities and establishing "responsiveness, transparency, and accountability, particularly for bishops," he added.

He said the pope sees safeguarding as part of his call for a change of culture, "that is, a reform in how we approach ministry for, in addition to being a crime, sexual abuse of minors by clerics is about the corruption of our ministry."

The February meeting "is the beginning of a worldwide reform that will need to be ongoing and will involve a process of initiatives on regional, national and diocesan levels," he said.

Gracias told Crux in October that the February meeting "cannot be cosmetic" or superficial. "Either it will be successful, or it will be a disaster for the church."

The other organizing committee member is Scicluna, who has assisted the pope with several high-profile abuse investigation cases. He serves as adjunct secretary of the Congregation for the Doctrine of the Faith and is president of the congregation's board that reviews appeals filed by priests laicized or otherwise disciplined in sexual abuse or other serious cases.

Scicluna said the meeting will include "a penitential liturgy" because "Pope Francis wants it." He said abuse survivors "are going to be a part of that liturgy too, just as they will be consulted in advance of the meeting and be listened to during it."

He told America Magazine Nov. 23 that the "main goals" of the meeting "are to make bishops realize and discuss together the fact that the sexual abuse of minors is not only an egregious phenomenon in itself and a crime, but it is also a very grave symptom of something deeper, which is actually a crisis in the way we approach ministry. Some call it clericalism, others call it a perversion of the ministry."

The meeting will mark "the beginning of a new approach that I hope will be global, because it concerns the whole church," he said. However, all solutions and approaches will have to lived concretely on the local level, "in every parish, in every school, in every diocese," he said, "otherwise it's not effective at all."

"We have to move away from panic-driven policies that put the good name of the institution above all other considerations" and "in the end, those policies do reputational damage to the institution; they are actually also counterproductive, and it's a no-go area."

Zollner, who is also a licensed psychologist and psychotherapist and has accompanied abuse survivors to the Vatican, said the pope will be present at the February meeting's work sessions.

He told Vatican News that the meeting will be a "synodal" journey involving sharing information, reflections, prayer, penance and proposals for concrete action.

Those who are invited to the meeting include presidents of national bishops' conferences around the world; heads of the Eastern Catholic churches; representatives of the Union of Superiors General and of the International Union of Superiors General; top officials of the Secretariat of State; prefects of the congregations for the Doctrine of the Faith, for Eastern Churches, for Bishops, for the Evangelization of Peoples, for the Clergy, for Institutes of Consecrated Life and Societies of Apostolic Life, and of the Dicastery for Laity, the Family and Life.

A version of this story appeared in the Dec 14-27, 2018 print issue under the headline: Pope names organizing commitee for abuse conference in February.