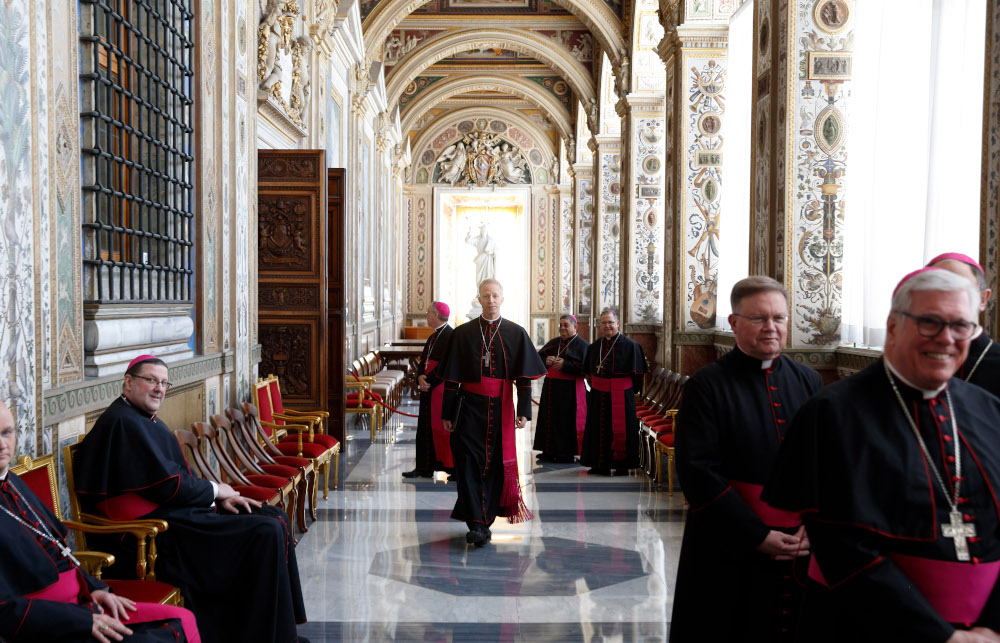 Bishop William A. Wack of Pensacola-Tallahassee, Fla., center, and other U.S. bishops from Florida, Georgia, North Carolina and South Carolina wait to meet Pope Francis in the Apostolic Palace at the Vatican Feb. 13, 2020. The bishops were making their "ad limina" visits to the Vatican to report on the status of their dioceses to the pope and Vatican officials. (CNS/Paul Haring)

Pope Francis told a group of U.S. bishops that, like them, he is accused of not being courageous or not listening to the Holy Spirit when he says or does something someone disagrees with — like not mentioning married priests in his document on the Amazon.

"You could see his consternation when he said that for some people it was all about celibacy and not about the Amazon," said Bishop William A. Wack of Pensacola-Tallahassee.

"He said some people say he is not courageous because he didn't listen to the Spirit," the bishop told Catholic News Service Feb. 13. "He said, 'So they're not mad at the Spirit. They're mad at me down here,'" as if they assume the Holy Spirit agreed with them.

Wack was one of 15 bishops from Florida, Georgia, North Carolina and South Carolina who spent close to three hours with Francis Feb. 13 as part of their "ad limina" visits to the Vatican. They were joined by two from Arizona — Bishop Edward J. Weisenburger of Tucson and Auxiliary Bishop Eduardo A. Nevares of Phoenix — who had been unable to meet the pope with their group Feb. 10.

During the meeting, one bishop asked Francis for three or four points he would like them to share with their people from the document "Querida Amazonia" (Beloved Amazonia), which was released the day before and offered the pope's reflections on the Synod of Bishops for the Amazon.

Auxiliary Bishop Joel M. Konzen of Atlanta told CNS that the pope said the most important message in the document for U.S. Catholics is to care for the planet, "that this is a grave matter."

Then, he said, the pope told the bishops that months or even years go into producing documents and what gets reported by the media "is one line" or that "the pope didn't have the courage to change the rules of the church."

Wack said the pope told them the synod met "'to talk about the issues of the church in the Amazon. Other people wanted me to talk about celibacy. They made that the issue. But that wasn't the issue of this synod.'"

Francis told the bishops that they and their priests must teach and preach about care for the environment, Wack said. "He said even if people don't want to hear it. How can we deny that things are changing? How can we deny that we're hurting our future? And he said, if we don't talk about these things, well, shame on us. We have to preach the Gospel, and this is part of the Gospel."

Archbishop Thomas G. Wenski of Miami said Francis also talked about what he means by "synodality" and members of the church listening to each other, praying about issues and trying to discern a way forward together. The synod, he said, is not "a parliament in which people take majority votes on a whole bunch of issues."

Among the reactions concerning the exhortation that caught Francis' eye, he said, was a commentary that said "the pope lacked courage" on the issue of ordaining married men.

If discernment and the action of the Holy Spirit are missing, then it is just "a meeting and it's people sharing opinions and maybe research, but it's not necessarily a synod unless it's in some way governed by the Holy Spirit," Konzen said.

Wack said Francis also explained that synodality and discernment are processes that continue even after a synod has met and a document has been published.

"He said, 'You can't just meet once and then say, "Oh, we have all the answers," but the conversation continues,'" the bishop said. "And so, he said, 'What we did is we raised these issues, and now we have to deal with them,'" continuing to invoke the Holy Spirit and discern the path for the future.

As with the 13 groups of U.S. bishops that preceded them, the bishops also spoke with the pope about the clerical sexual abuse crisis, immigration, youth and young adult ministry and what it means to be a bishop.

Francis spoke at length about being a bishop, he said. "He said if we're too busy doing other things, we put those aside; we pray, and we preach, and we serve our people."

The bishops' meeting with the pope, he added, was a moment to "be with the pope, see the pope and to hear the pope" in a relaxed atmosphere and discuss issues "that concern us bishops throughout the world."

"That was a great opportunity because often times, as bishops, we experience the pope through the filter of the news media. And it's good to experience him without that filter; (to) experience him face to face," he said.

(Contributing to this story were Cindy Wooden, Junno Arocho Esteves and Carol Glatz.)