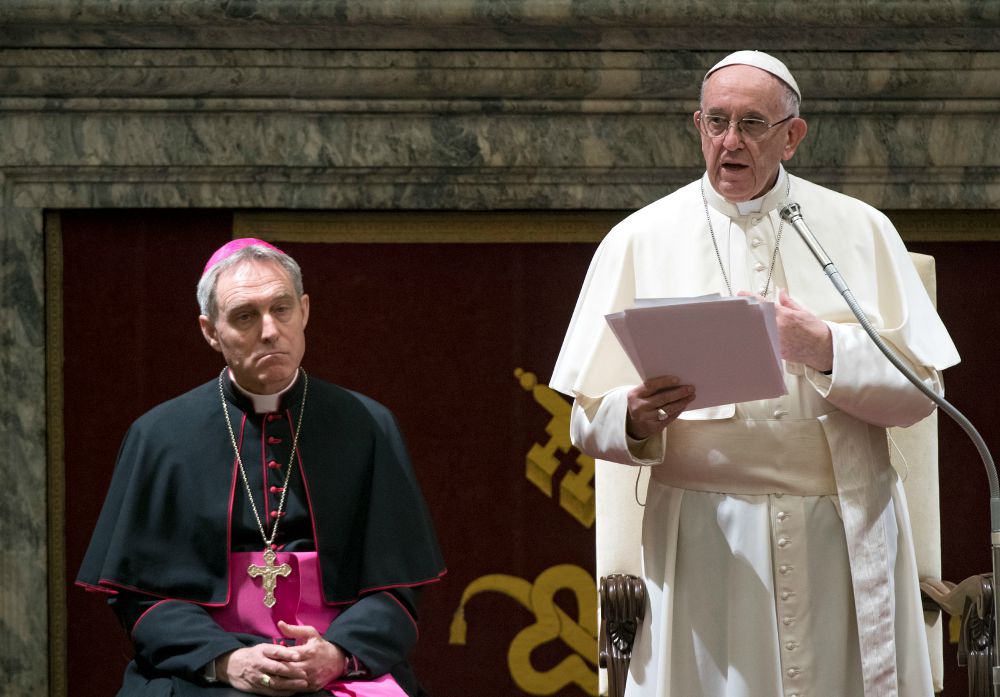 Pope Francis speaks during his annual pre-Christmas meeting with top officials of the Roman Curia and Vatican City State and with cardinals living in Rome in the Clementine Hall Dec. 21 at the Vatican. At left is is Archbishop Georg Ganswein, prefect of the papal household. (CNS/Reuters pool/Claudio Peri)

Pope Francis again upbraided the high-level Catholic prelates who run the Vatican bureaucracy in an annual pre-Christmas speech Dec. 21, telling them to get beyond what he termed an "unbalanced and degraded logic of plots and small cliques" in order to better serve him, the global church and the world at large.

Francis told the cardinals and bishops who run the bureaucracy to not "let themselves be bribed by their ambition" in search for higher office but rather to act simply as antennae that listen for the "cries, joys and tears of the churches of the world" and relay what they hear to him.

Most of all, the pope told the prelates the Vatican is not designed to be closed in on itself but to be at the service of the world, especially local bishops, "for whose good it operates and acts."

Speaking in the apostolic palace's 16th-century Clementine Hall in his colorful style, Francis warned: "A curia closed up in itself would betray the objective of its existence and would fall into self-centeredness, condemning itself to self-destruction."

The pope was speaking Dec. 21 in an annual meeting that under previous pontiffs had simply been a polite encounter to exchange greetings before the holidays.

But, in 2014, he shocked the Vatican bureaucracy, known as the Roman curia, by using the occasion to list off 15 "spiritual sicknesses" he said he had witnessed among them. In 2016, he lashed out at high-level prelates who have been opposing his efforts to reform the Vatican, saying some are practicing a "malevolent resistance."

This year, Francis focused on the curia's relationship with the wider world, especially with other nations, Christian denominations and other religions. The pope laced his 30-minute address with references to three different analogies for how he thinks the curia should work: as a deacon, always aimed at serving others; as antennae, relaying signals; and as parts of a body, feeling and relaying sensations.

Describing the role of senses as "helping us to grasp the real and equally to place ourselves in the real," Francis said that ability helps identify what is essential and not.

"This is very important in getting beyond the unbalanced and degraded logic of plots and small cliques that in reality represent — despite all their justifications and good intentions — a cancer that brings on self-centeredness, that infiltrates ecclesiastical organisms and the people who work in them," said the pope.

Francis then lambasted "the betrayers of trust or the profiteers of the maternity of the church; people that are selected to give better vigor to reform but — not understanding the highness of their calling — let themselves be bribed by ambition or vainglory and when they are delicately removed erroneously declare themselves martyrs of the system, of a 'pope who doesn't know,' of the 'old-guard,' instead of reciting 'mea culpa.' "

Among those who left Vatican service in the last year were the city-state's first auditor general, a deputy in the so-called Vatican bank, and the former head of the Congregation for the Doctrine of the Faith, German Cardinal Gerhard Müller.

In tying the role of members of the curia to that of a deacon, Francis referred to the third-century Didascalia Apostolorum, which describes the deacon as "the ear and the mouth of the bishop, his heart and his soul."

"I don't believe it's an accident that the ear is the organ of hearing but also of equilibrium, and the mouth the organ of breathing but also speaking," Francis said. "The relation we can deduce from these images is that of a communion of filial obedience for the service of the holy people of God."

The pope told his subordinates he referred to them as deacons and as parts of one body "to explain that in order to reach the spaces where the Spirit speaks to the churches today ... it is necessary, in fact indispensable, to practice discernment of the signs of the times, communion in service, charity in truth, docility to the Spirit and confident obedience to superiors."

Francis then explained how he wants the curia to interact with other nations, local churches, eastern Catholic churches, in ecumenical dialogue and with other religions. He told the Vatican bureaucrats that their relationship with local bishops should be based on "collaboration, trust, and never superiority or conflict."

"The Roman curia ... has as its reference point not only the Bishop of Rome, from which it takes its authority, but also surely the local churches and their pastors around the whole world, for whose good it operates and acts," he said.

In the curia's relation with other nations, Francis praised the role of Vatican diplomacy, which he called "the sincere and constant search to make the Holy See a builder of bridges, peace and dialogue among nations."

He said the role of Vatican diplomats is to "listen, understand, help, lift up and intervene readily and respectfully in any situation to close the distance and weave trust."

"The only interest of Vatican diplomacy is that of being free of any worldly or material interest," he said.

Francis ended his speech with a reflection on the meaning of the Christmas story, when Christians believe God entered into human history as a small child.

At a later meeting with non-managerial Vatican staff Dec. 21, Francis asked their forgiveness, saying that at times the people around them have not always been good role models and have made mistakes. The pope also said he wanted to end the Vatican's system of hiring some workers on a temporary basis or even paying them "under the table," saying such arrangements do not respect the dignity of the officials' work.

Francis inserted some of his trademark humor into his Christmas message with the curia's prelates. Referring at one point to his continuing efforts to reform the Vatican, he quoted 19th-century Belgian archbishop and papal statesman Xavier de Mérode's assertion that "reforming Rome is like cleaning the Sphinx of Egypt with a toothbrush."