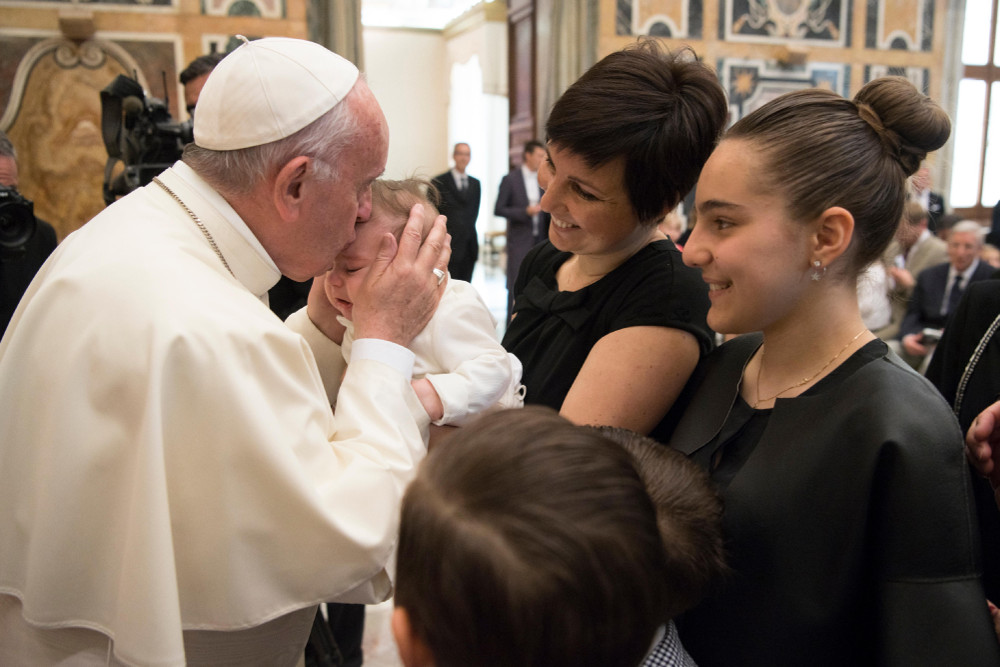 Pope Francis kisses a baby during an audience with representatives from the Federation of Catholic Family Associations in Europe at the Vatican June 1. (CNS/L'Osservatore Romano)

Describing them as "authentic magisterium," Pope Francis ordered the official publication of his letter to a group of Argentine bishops and their guidelines for the interpretation of "Amoris Laetitia," his apostolic exhortation on the family.

According to a brief note by Cardinal Pietro Parolin, Vatican secretary of state, Pope Francis wanted his letter and the bishops' document to be published on the Vatican website and in the "Acta Apostolicae Sedis," the official record of Vatican documents and acts.

The papal letter, dated Sept. 5, 2016, was written in response to guidelines published by the bishops in the Catholic Church's Buenos Aires region. Pope Francis said the bishops' document "explains precisely the meaning of Chapter VIII of 'Amoris Laetitia.' There are no other interpretations."

The letter is found on the Vatican website under letters written by the pope in 2016, and was published in the October 2016 edition of the "Acta Apostolicae Sedis," which also is available online: http://www.vatican.va/archive/aas/documents/2016/acta-ottobre2016.pdf.

Cardinal Francesco Coccopalmerio, president of the Pontifical Council for Legislative Texts, told Catholic News Service Dec. 5, "The fact that the pope requested that his letter and the interpretations of the Buenos Aires bishops be published in the AAS means that His Holiness has given these documents a particular qualification that elevates them to the level of being official teachings of the church.

"While the content of the pope's letter itself does not contain teachings on faith and morals, it does point toward the interpretations of the Argentine bishops and confirms them as authentically reflecting his own mind," the cardinal said. "Thus together the two documents became the Holy Father's authentic magisterium for the whole church."

The eighth chapter of "Amoris Laetitia" is titled, "Accompanying, Discerning and Integrating Weakness," and is the most debated chapter of the document. It urges pastors to assist those whose marriages have faltered and help them feel part of the church community. It also outlines a process that could lead divorced and civilly remarried Catholics back to the sacraments.

Some church leaders and theologians have insisted reception of the sacraments is impossible for such couples unless they receive an annulment of their sacramental marriage or abstain from sexual relations with their new partner.

The Buenos Aires document said the path of discernment proposed by Pope Francis "does not necessarily end in the sacraments," but should, first of all, help the couple recognize their situation, understand church teaching on the permanence of marriage and take steps toward living a more Christian life.

"When feasible," the guidelines said, divorced and civilly remarried couples should be encouraged to abstain from sexual relations, which would allow them to receive the sacrament of reconciliation and the Eucharist.

While there is no such thing as "unrestricted access to the sacraments," the bishops said, in some situations, after a thorough process of discernment and examination of the culpability of the individual in the failure of the sacramental marriage, the pope's exhortation "opens the possibility" to reception of the sacraments.