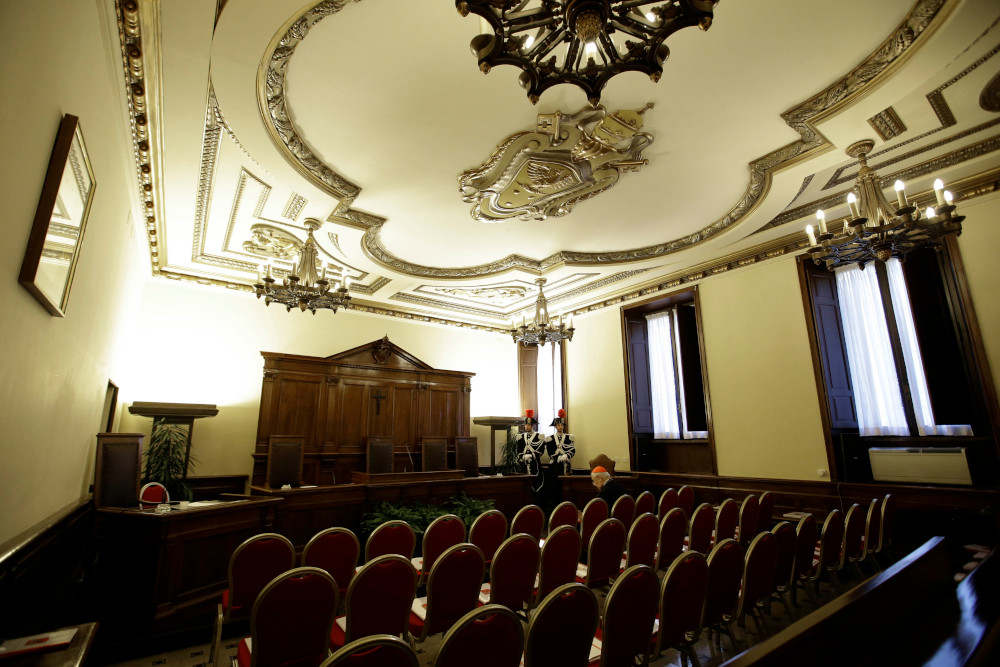 In this Jan. 11, 2014 file photo, Vatican Gendarmes, background, take position prior to the start of a ceremony for the opening of the Vatican judicial year, outside the Vatican's Court Palace. (AP File/Gregorio Borgia)

— A criminal investigation into a Vatican real estate investment is exposing weaknesses in the city state's judicial system and a lack of some basic protections for those accused — highlighting the incompatibility of the Holy See's procedures with European norms.

The Vatican has never been a democracy, but the incongruity of a government that is a moral authority on the global stage and yet an absolute monarchy is becoming increasingly evident. The pope is supreme judge, legislator and executive, who holds the ultimate power to hire and fire officials, judges and prosecutors and make and waive laws and regulations.

One longtime papal adviser who quit all his Holy See consulting roles to protest what he considered grave human rights violations in the probe of the 350 million-euro London real estate investment spelled out his reasoning in emails to the Vatican's No. 2 official that were obtained by The Associated Press.

If nothing is done, wrote Marc Odendall, "the Holy See will no longer be able to integrate itself in the system of civilized countries and will return to a universe reserved to totalitarian states."

The investigation burst into public awareness on Oct. 1, 2019, when the pope's bodyguards raided the Vatican secretariat of state — the offices of the central government of the Holy See — and the Vatican's financial watchdog authority, known as AIF. Pope Francis personally authorized the raids after a trusted ally alerted Vatican prosecutors of suspicions about the investment.

The investigation has been portrayed as a sign that Francis is cracking down on corruption. And there is evidence of at least financial mismanagement by Vatican officials, since they agreed to pay Italian middlemen tens of millions of euros in fees.

But the suspects say Francis was at least aware of the payment and that top Holy See leaders authorized it. A lawyer for one even contended that the pope himself approved it. 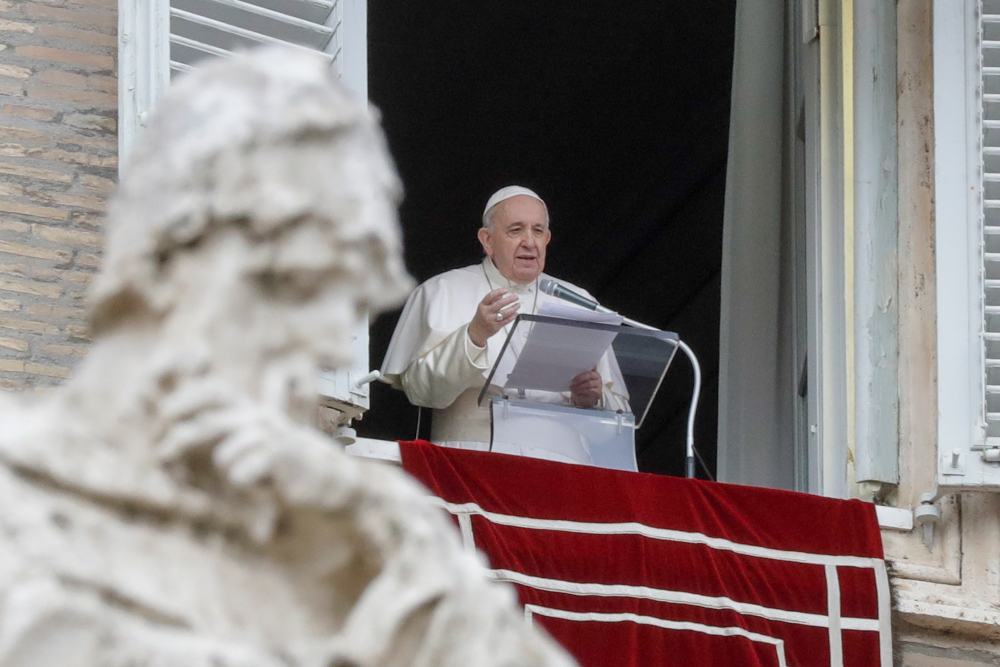 In this Dec. 8, 2020 file photo, Pope Francis delivers his message during the Angelus noon prayer from the window of his studio overlooking St.Peter's Square, on the Immaculate Conception day, at the Vatican. (AP File/Andrew Medichini)

The Vatican prosecutor's office denied to AP that Francis authorized the money, but acknowledged that he did join a meeting of people negotiating the final stages of the deal in which "he asked them to find a solution with the good will of all."

The prosecutors also said the deputy secretary of state, Monsignor Edgar Pena Parra, similarly wasn't a suspect because he "was not informed" about what his subordinates were up to, though even the prosecutors' own documentation suggests he was. In fact, no senior leaders are known to be under investigation.

The case has highlighted the limitations of the Vatican law, which is based on an 1889 Italian code no longer in use and greatly curbs the rights of defendants during the investigative phase compared to modern legal systems.

For instance, Francis authorized Vatican prosecutors to use a "summary rite" that allowed them to deviate from typical procedures, essentially giving them carte blanche to interrogate and conduct searches and seizures without oversight by an investigating judge, defense lawyers say.

"It's a phase that's completely in the hands of the prosecutors," said Laura Sgro, who has defended clients before the Vatican tribunal but is not involved in this case. "It's a phase that doesn't foresee the most minimal right to defense."

It took months for the suspects to even be able to tell their side of the story to prosecutors, despite having their names and photos, displayed on a Vatican police circular, leaked to the media. Their lawyers have had no access to the documentation in the case. They never received a list of the material seized or had the chance to contest the seizures before a judge, as would be required in Italy. To date no one has been indicted.

The prosecutors insist the rights of the accused have been safeguarded, and that the pope had to order the "summary rite" because of a technicality owing to the old code in use.

But Paolo Carozza, a member of the Council of Europe's Venice Commission, which promotes democracy, rule of law and human rights, said there appeared to be red flags with the case, starting with the search warrant, though he acknowledged he wasn't familiar with particulars.

"I think it [is] self-evidently not compatible with the basic standards of procedural justice that would be applied in other European legal systems," said Carozza, a law professor at the University of Notre Dame and former member of the Inter-American Commission on Human Rights. "There needs to be specific causes for specific searches of specific things... And then there needs to be an accounting afterward, certainly, and an opportunity to contest things."

Kurt Martens, a canon lawyer who works in the Vatican's other justice system for church crimes, was more blunt: "This is what you have in a banana republic." 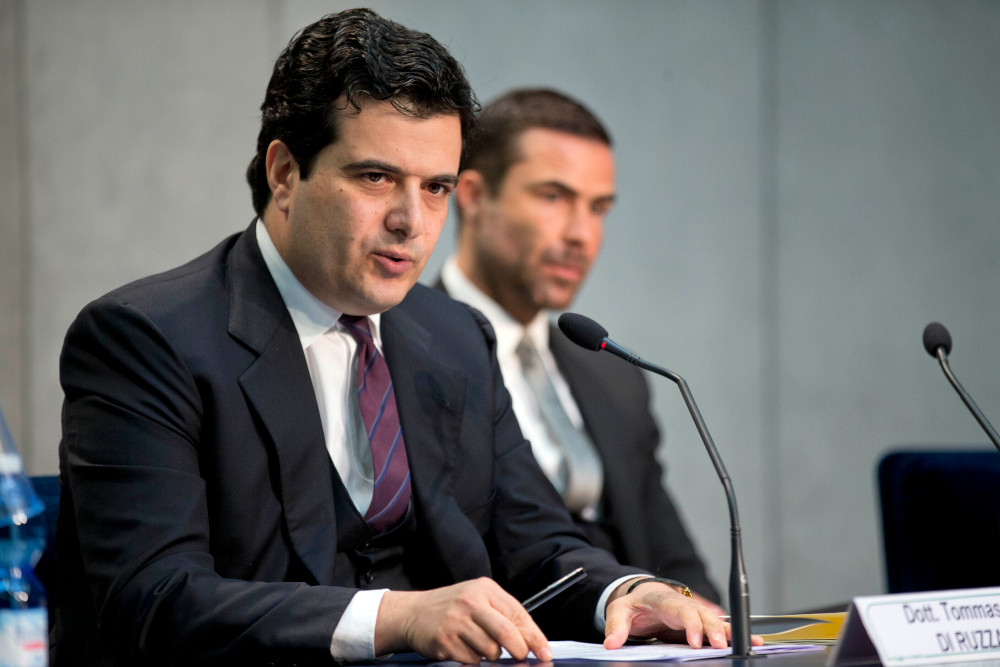 In this April 28, 2016 file photo, Tommaso Di Ruzza, then director of the Vatican Financial Information Authority, left, flanked by Rene Brulhart, then president of the AIF. (AP File/Andrew Medichini)

Further complicating their defense, once a ruling is made, the accused have no recourse outside the Vatican system, since the Holy See isn't a signatory to the European Convention on Human Rights, which allows defendants to petition the European court in Strasbourg.

"How is this compatible with the right of every person to know the accusations that are made against them, to know the motivations and have a just trial by independent judges?" he asked. He was referring to the case of a cardinal implicated in the deal whom Francis summarily fired on unrelated allegations, but his point applies more broadly.

Questions about the lack of a separation of powers in the Vatican and independence of its judicial system have cropped up before. In one famous case, prosecutors decided to not even investigate the cardinal whose Vatican apartment was renovated using a half-million dollars in donations for the pope's children's hospital. The hospital president who diverted the funds was convicted by the Vatican tribunal.

More recently, Francis summarily lifted the statute of limitations in a criminal sex abuse case — with no chance for the accused priest to contest the decision.

When the Vatican prosecuted two journalists in 2015 for reporting on confidential Vatican documents, media watchdogs denounced the trial as an assault on press freedom. The journalists, who described a "Kafka-esque" investigation, were ultimately cleared after the tribunal declared at the end of the trial it never had jurisdiction over them.

The Vatican has long defended its legal system as sound, but Odendall, the papal adviser who quit in protest over the raids, has repeatedly told top Vatican officials that the current probe is exposing the Holy See to institutional and reputational damage.

Odendall warned the secretary of state, Cardinal Pietro Parolin, in November of a public relations "time bomb that risks exploding if the unacceptable situation of the Holy See's judicial system becomes public."

It already has. Next week lawyers for an Italian woman sought by Vatican prosecutors as part of the probe will argue against her extradition in an Italian court.

One possible argument at their disposal: that since there is no extradition treaty between Italy and the Vatican, Italian law precludes sending any Italian to a country that doesn't guarantee the "fundamental rights" to a fair trial.