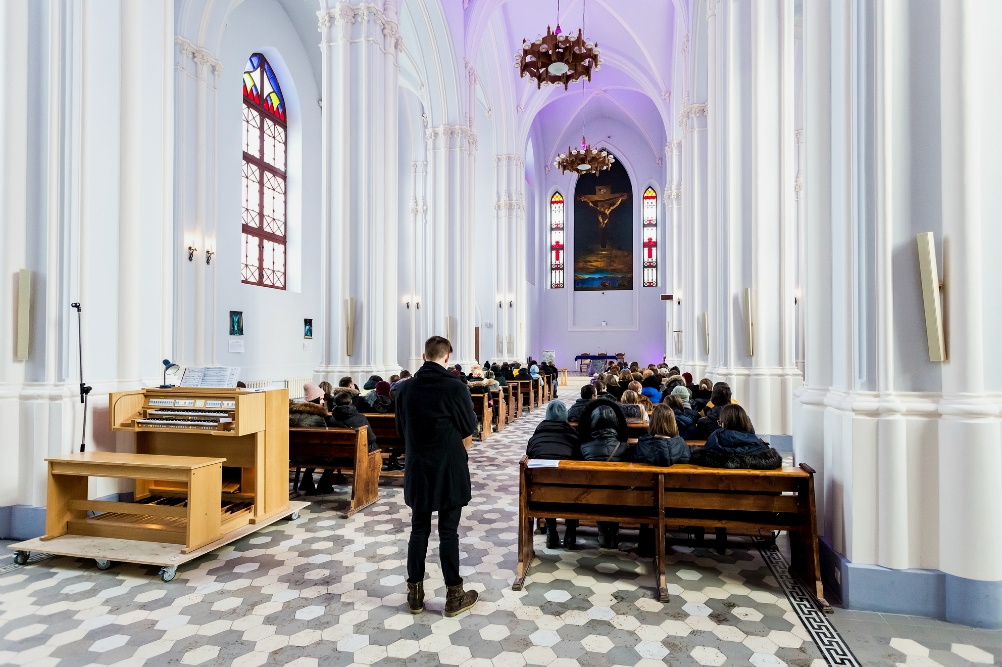 Worshipers gather at the Roman Catholic Church of the Sacred Heart of Jesus in Samara, Russia, on Feb. 25. (Dreamstime/Alexandr Blinov)

When Pope Francis discussed the Syrian crisis with Russia's Patriarch Kirill by phone in mid-April, it was just the latest top-level Catholic-Orthodox exchange since their historic meeting in Cuba two years ago — and it predictably brought fresh pledges of dialogue and cooperation.

Yet some observers wonder whether the new interchurch closeness has brought any real benefits at the local level, and whether it can continue during the latest downturn in Russia's relations with the West.

"Whereas politicians tend to set people apart, the mission of religious leaders is to reconcile them," Msgr. Igor Kovalevsky, secretary-general of Russia's Catholic bishops' conference, told NCR. "Since our own church is small and weak by itself, we should be pleased if these contacts with the Holy See have helped achieve a few small steps, if nothing more. But they all seem to be happening over our heads without much reference to local conditions."

During their 15-minute talk on April 14, Francis and Kirill agreed on the need to protect endangered Christians in the Middle East, and pledged, by the Russian Orthodox account, to continue working for world peace.

Such themes were featured prominently in their February 2016 Havana talks, when their 30-point Joint Declaration had also deplored the "grave threat to religious freedom" posed by the West's "secularized societies."

In the flurry of contacts since, a key fixture was a Moscow visit in August 2017 by the Vatican's secretary of state, Cardinal Pietro Parolin, who lauded the "undoubted new dynamism" heralded by the Havana encounter.

In an interview before his arrival, Parolin assured Gaudete.ru, an online Catholic magazine, that his first aim would be to "meet the local Catholic community" and to tackle the "very serious, urgent problem" of ensuring work permits for foreign clergy and the restitution of Catholic properties seized under Soviet rule.

Little if anything has happened since to benefit Russia's still heavily restricted Catholic communities, who are put at 773,000 by the Vatican's Annuario Pontificio and are widely dispersed over a Moscow-based archdiocese and dioceses in Saratov, Irkutsk and Novosibirsk. Some regional authorities have granted visas to visiting priests; other authorities have refused or prevaricated.

As for property restitutions, an Immaculate Conception church was rededicated at Ryazan in April by Russia's Italian-born Archbishop Paolo Pezzi, after being closed for eight decades. The rededication required years of litigation and the church, long used as a state art school, will need total reconstruction.

Meanwhile, other churches are still being withheld, such as at Kirov, where the parish priest, Fr. Grigoriy Zvolinskiy, began a hunger strike last month in protest. 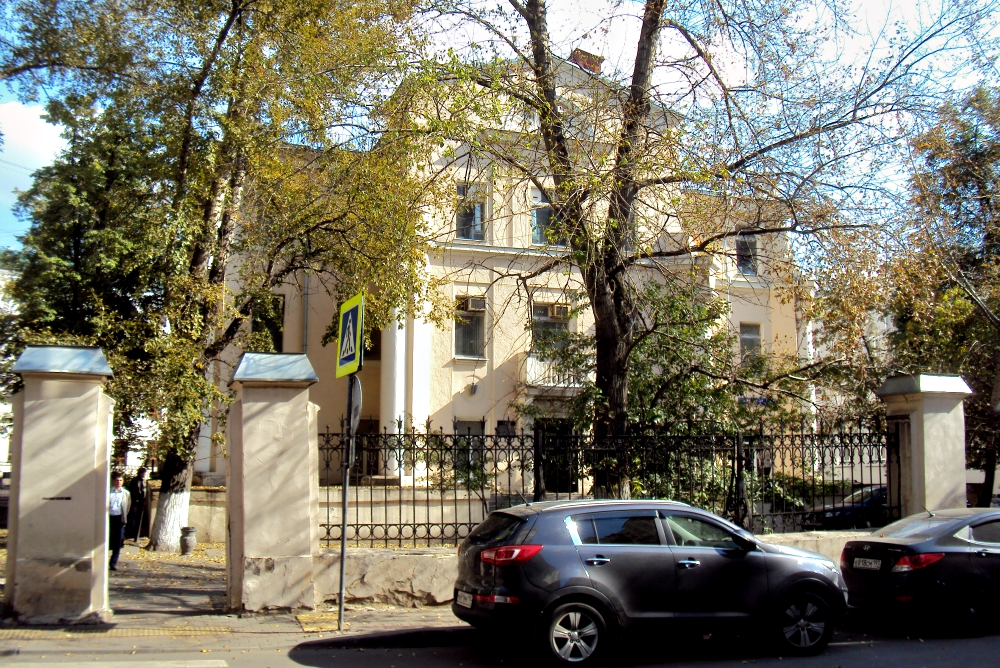 In Moscow, Kovalevsky's own historic church complex, Sts. Peter and Paul, still awaits reopening, despite several court rulings in favor of his parish.

"Despite the court victories, we're still facing bureaucratic delays in registering our property rights," Kovalevsky said. "Since some of our church's difficulties have been raised in the course of the Vatican's contacts, we can say we've benefited and no longer feel so threatened. But I wouldn't be too optimistic: The general situation isn't easy here, and the Catholic Church still faces great challenges merely building bridges with Russian society."

Popes since the reign of Paul VI (1963-78) have enjoyed friendly ties with some Orthodox leaders, including the Istanbul-based ecumenical patriarch, who's recognized as the spiritual head of Orthodoxy's nine patriarchates and 21 self-governing churches. But ties have often been tense with the Russian church, which claims half the world's 250 million Orthodox Christians and is by far the largest.

After the collapse of communist rule in 1989-91, there was talk of a possible summit between Pope John Paul II and Russia's then-patriarch, Aleksi II. But this was prevented by Russian complaints that Catholics were "proselytizing" in traditionally Orthodox areas. The dispute reached a head in 2002, when the Polish pope created four Catholic dioceses in Russia.

Contacts improved after the 2005 election of Pope Benedict XVI, leading ultimately to the brief, much-celebrated Havana meeting between Francis and Kirill.

Today, however, the interchurch exchanges are being questioned, given the Russian church's close relationship with controversial President Vladimir Putin.

Putin's landslide re-election on March 18, amid reports of ballot-stuffing and intimidation, was received cautiously by Russia's Catholic bishops' conference, whose Saratov-based chairman, Bishop Clemens Pickel, told the president the Catholic minority prayed he would "justify the confidence of voters."

By contrast, Kirill glowingly welcomed the election results, congratulating Putin on his "convincing victory in open and fair conditions," and praising the president's "responsibility for preserving and multiplying the nation's spiritual, moral and cultural values."

During Putin's 18 years in power, the Orthodox Church's wealth and infrastructure have expanded dramatically, while its spiritual and temporal supremacy in national life, endorsed by laws and regulations, now seems assured.

Orthodox leaders have shown their gratitude by giving a religious and moral underpinning to Putin's authoritarian rule and endorsing his claim to be safeguarding true Christianity against the decadent West — as well as by backing the projection of Russia's regional power with rhetoric about Slavic brotherhood and unity.

Not a word has been uttered by Orthodox leaders questioning the forcible 2014 annexation of Crimea or Russia's involvement in the savage four-year war in Eastern Ukraine, which has left more than 10,000 dead and 25,000 wounded.

As for criticizing regime policies, the head of the Moscow Patriarchate's Church and Society Department, Vladimir Legoyda, insisted in April this would never happen. Opposing secular authorities wasn't characteristic of Orthodoxy, Legoyda assured the Rossiyskaya Gazeta daily. Nor had Christ himself sanctioned such things.

There've been signs of resistance.

Plans to build Russian Orthodox cathedrals in Western cities, including Paris, Madrid and Nicosia in Cyprus, have faced local opposition.

In neighboring Ukraine, feuding continues with the Greek Catholic Church, which was outlawed and savagely persecuted under Soviet rule with Russian Orthodox connivance. Many Greek Catholics were dismayed when the 2016 Havana declaration appeared to excuse Russian Orthodox hostility and used the contemptuous Russian term "uniates" to describe them. 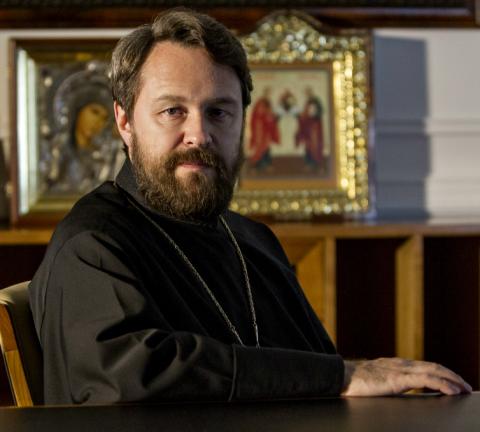 Such fears were stoked again during Parolin's Moscow visit, when Hilarion accused Greek Catholics of "politicized statements and aggressive actions."

Yet the Russian Orthodox stance could backfire.

In April, Ukrainian parliamentarians overwhelmingly backed a request from President Petro Poroshenko to the ecumenical patriarch, Bartholomew I, for the country's Orthodox Church to be granted independence from the Moscow Patriarchate.

"The Kremlin sees the Russian Orthodox Church as a key tool for influencing Ukraine," Poroshenko told the Kiev-based Verkhovna Rada. "This is why separation from the church of Moscow is a matter of national security and self-defense when this hybrid war is being waged against us. It will curtail Moscow's attempts to dictate our history and our future."

Meanwhile, Poland's Catholic Church initiated a dialogue with the Russian Orthodox to much fanfare in August 2012, with a joint declaration pledging to "overcome mutual prejudices and misunderstandings." But the Polish Catholic Church has now suspended contacts, concluding the goodwill gestures had had no impact on Russia's aggressive behavior.

In a message for Orthodox Easter in April, Kirill assured the Russian army its "historic mission in Syria" was "not just political and humanitarian, but also spiritual," and made no mention of his country's deadly bombing campaign against Syrian cities.

And when ties with Western governments plummeted over British accusations that Moscow had engineered a nerve-agent attack on a Russian exile in Salisbury, the Orthodox Church again took the Kremlin's side, with Hilarion dismissing the British claims as "nonsense" and backing Putin's countermeasures.

Hilarion has also rejected claims of Russian meddling in U.S. elections and urged Putin to ignore them.

"Many American Christians ardently sympathize with Russia and its president, and I know many Russian Christians also sympathize with the American president, who is in a very difficult situation," Hilarion observed after visiting Washington, D.C., in 2017. "The mass media, including CNN, are conducting a targeted propaganda campaign against him, playing the Russian card. We hope he'll stick to his electoral promises and spare no effort to establish a dialogue with Russia." 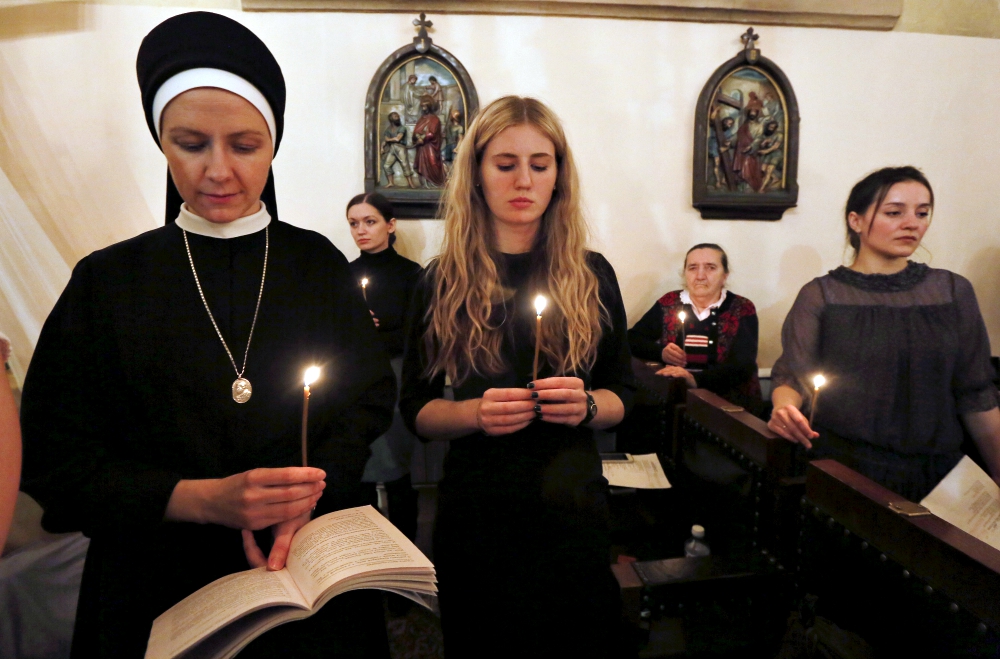 Women hold candles and pray at a Roman Catholic church during the Easter Vigil in Krasnoyarsk, Russia, March 26, 2016. (CNS/Reuters/Ilya Naymushin)

All of this should weigh heavily on the Vatican, which opened formal diplomatic ties with Russia in 2009, two decades after the Soviet Union's collapse, and has hosted Putin five times, most recently for meetings with Francis in November 2013 and June 2015.

As for defending Christian values against Western secularism, these values do not appear, in the Russian Orthodox lexicon, to have much to do with democracy and human rights, or respect for pluralism, free speech and national sovereignty — all subjects that were conspicuously absent from the 2016 Havana declaration.

Nor do the much-vaunted contacts seem to have eased the position of Catholics in Russia, whose bishops outlined their continuing problems in a two-hour session with the pope during their January ad limina visit.

When Francis travels to the Baltic states of Lithuania, Latvia and Estonia in September, a part of Europe now feeling the full force of Russian intimidation, it will be an opportunity to discern how much has really changed — and how far, beyond prayers for peace, the Catholic Church can go in its contacts with Russian Orthodoxy.

"Certainly, we're too isolated and insignificant here to do much for ourselves — while Russia's multi-ethnic Catholics hold various political views and often need reconciling themselves," he said. "At the very least, we should hope we won't be punished personally for any deterioration with the West, and will be able to continue our own mission of reconciliation, whatever the practical outcomes."