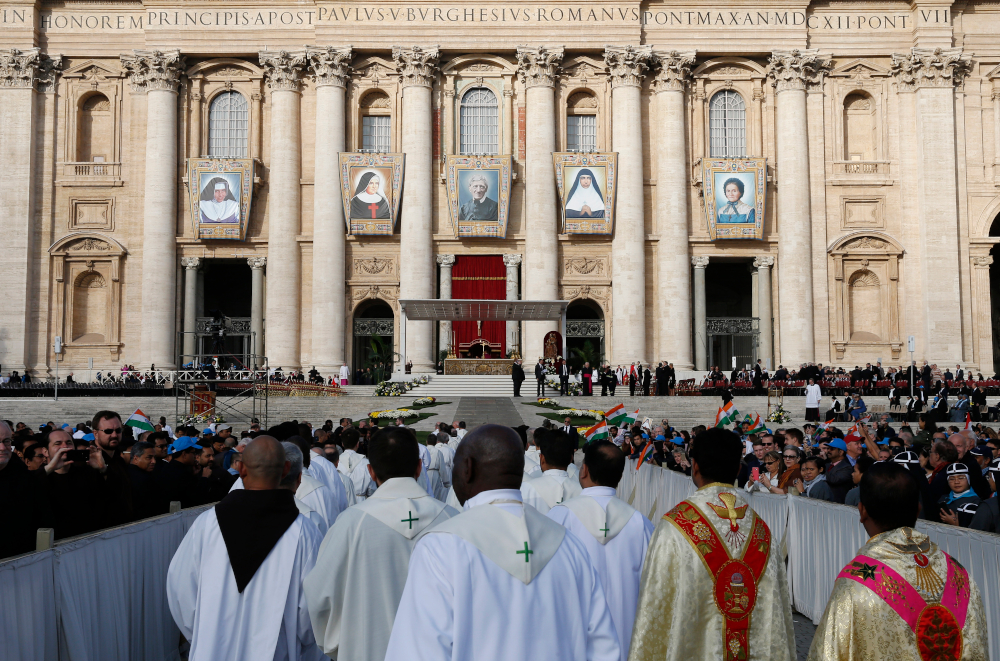 Priests arrive in procession for a canonization Mass celebrated by Pope Francis in St. Peter's Square at the Vatican Oct. 13, 2019. (CNS/Paul Haring)

In the Catholic Church, a person's canonization is almost always preceded by decades of meticulous investigation into the minute details of the candidate's life.

Thousands of saints have been raised to the altars after these thorough investigations, while the causes of many other candidates are usually suspended or closed when there is insufficient evidence of one's sanctity or the lack of miracle.

Yet, there are also causes that have been closed or delayed due to doubts or, worse, due to proverbial "skeletons in the closet" uncovered during the investigation into candidates' lives.

The delay in the sainthood cause of Fr. Joseph Kentenich, founder of the Schonstatt movement, was the most recent example of that last scenario, after allegations of abuse uncovered during an apostolic visitation in the early 1950s were made public July 2.

His cause was opened in 1975 in the Diocese of Trier, Germany, and was in the diocesan phase, which is the first step in a candidate's cause before it is sent to Rome for further investigation.

German scholar Alexandra von Teuffenbach, a former professor of church history at Rome's Pontifical Regina Apostolorum University, discovered documents in the recently opened archives of the pontificate of Pope Pius XII that revealed allegations of sexual abuse and abuse of power against Kentenich.

The revelations led German Bishop Stephan Ackermann of Trier to announce July 7 the formation of a historical commission charged with collecting and studying the new evidence found in the Vatican Apostolic Archives concerning Kentenich, to determine whether to proceed with his cause.

Cardinal Angelo Becciu, prefect of the Congregation for Saints' Causes, said although Kentenich's cause was not yet in the hands of the congregation, his office received several negative reports regarding the priest's cause and immediately informed Ackermann "so he could proceed with the necessary verifications."

"Certainly, if the accusations that have come to the forefront were to be considered well-founded, there would be no hesitation in shelving the case," Becciu said in an email to Catholic News Service July 21.

It "may come as a surprise to learn that causes are stopped quite often in the congregation," he said. In most cases, "it is a temporary halt, but it always has the aim of arriving at an objective judgment on the sanctity of the candidates. If the gaps or doubts are not removed, we do not proceed."

Becciu stressed that every sainthood cause is taken seriously, and should "an allegation, or even a simple report, emerge when the cause is at an advanced stage, it is immediately examined, evaluating every aspect of the matter scrupulously and seriously."

"New witnesses will be heard, new archival research will be carried out and the diocesan tribunals and the apostolic nunciatures — when it comes to countries other than Italy — will be involved," he told CNS. "In short, nothing is left unturned."

Among the causes that were halted in recent memory, he noted, was that of Fr. Leon Dehon, a French priest whose beatification was suspended in 2005 by Pope Benedict XVI to investigate "alleged anti-Jewish expressions" in his writings. 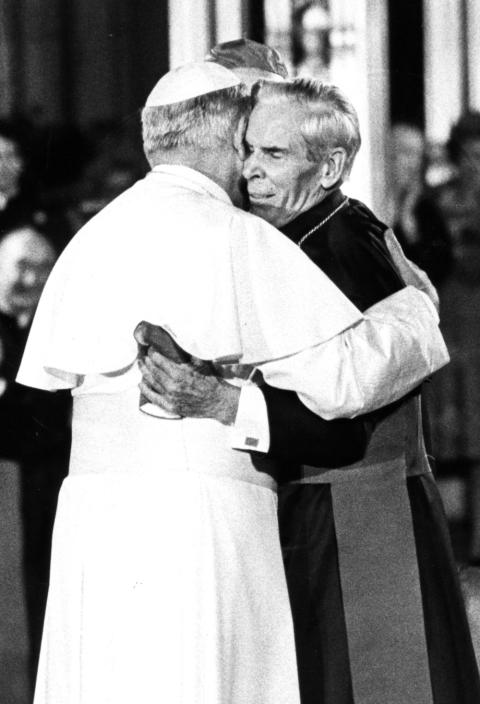 Then-Pope John Paul II is seen in an undated photo embracing Archbishop Fulton J. Sheen. Sheen, the famed media evangelist, mission promoter and author, was scheduled to be beatified Dec. 21, 2019, but the Vatican postponed it to allow the Diocese of Rochester—where he served as bishop—to further review his role in priest assignments, focusing on one priest accused of sexual misconduct. (CNS)

Archbishop Fulton Sheen was another well-known cause that was postponed.

In December, the Diocese of Rochester, New York, said it had "expressed concern about advancing the cause for the beatification of Archbishop Sheen at this time without a further review of his role in priests' assignments." The diocese also said "there are no complaints against Archbishop Sheen engaging in any personal inappropriate conduct, nor were any insinuations made in this regard."

Becciu told CNS that Sheen's cause was suspended "out of respect for the U.S. civil authorities, who must express their views on cases of sexual abuse that indirectly affect the period" when he led the Diocese of Rochester.

The cardinal also said the congregation recently intervened in the sainthood cause of an unnamed group of martyrs who were recently beatified.

"It was necessary to intervene to remove the names of two people from the list who were suspected of sexual abuse and for which there was no possibility of clarification. The group of martyrs were declared blessed, minus those two," he said.

However, the cause of Kentenich stands out in that, despite the fact his cause opened decades ago, the allegations against him were discovered in documents only recently made public.

Such circumstances raised several questions, particularly whether there should be a longer waiting period before a candidate's cause is opened.

Becciu told CNS he believed the church must always "maintain a healthy balance" when opening a sainthood cause.

"A cause should not start too late in order not to lose the wealth of data that can come to us from eyewitnesses," he explained. "On the other hand, archival research — which is now required for every cause of beatification — must be serious and carried out by experts in the field."

Another question was whether the church follows any specific protocol if a credible allegation of abuse is discovered after a person is beatified or canonized.

"That's a good question and, hopefully, something like that will never happen," Becciu told CNS. "The Catholic Church does not recognize the institution of 'de-canonization,' that is, the procedure of the deprivation of the title" of saint or blessed.

Becciu said that while there is always room for improvement in the sainthood process, the current procedure is "quite serious" and have "so far proved reliable in its various passages of judgment."

"According to a wise practice of the church, after a thorough and articulate human judgment on the life of a candidate to the altars, the approval of a miracle is required as divine confirmation of the conclusions reached by men and women."

Kentenich's case also raised concerns regarding the cult of personality often yielded by founders of religious congregations and movements, as well as the possibility that followers may seek to protect their founder's legacy by hiding allegations.

A similar case was that of German Doig, co-founder of Sodalitium Christianae Vitae, whose sainthood cause was opened after his death in 2001 and who was promoted as a model of holiness by the group's members.

His cause was closed a decade later after credible accusations of sexual abuse surfaced against him and the founder of the movement, Luis Fernando Figari.

Becciu told CNS that while the Catholic Church takes a cautious approach to all sainthood causes, it "pays careful attention" to causes involving the founders of movements and religious institutes "precisely because of the role they play and their ascendancy among their followers."

Canonical legislation, he said, dictates that those who testify during the investigations should not belong to the same movement or congregation as the candidate, thus allowing witnesses to voice their opposition to a person's canonization.

"As an example, I can say that this was the case in the causes of St. Josemaria Escriva de Balaguer (founder of Opus Dei), the Servant of God Chiara Lubich (founder of the Focolare movement) and others," Becciu said.

Nevertheless, Becciu told CNS that clarity and transparency were necessary elements of the sainthood process and that "any negative elements that emerge must be investigated with meticulous diligence."

"Not only is the judgment on a person's holiness at stake here, but the credibility of the church itself," he said.